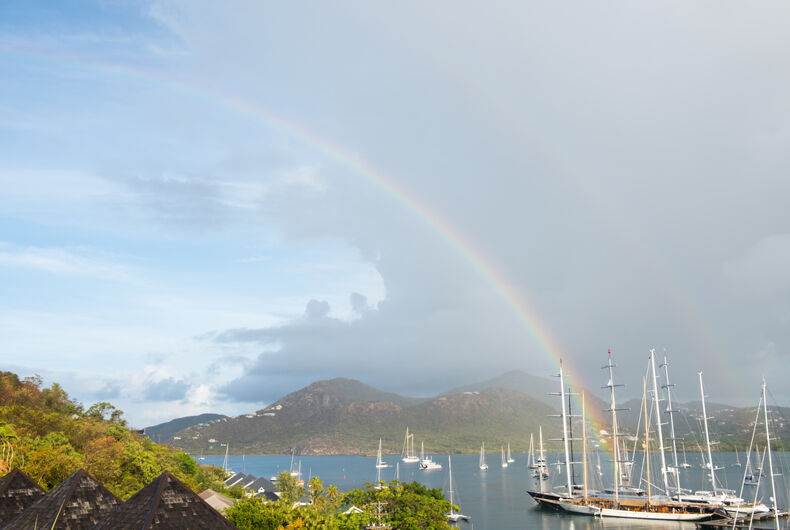 A rainbow in AntiguaPhoto: Shutterstock

A Caribbean court has ruled a law criminalizing gay sex to be unconstitutional.

The Eastern Caribbean Supreme Court found that “the selection of an intimate partner is a private and a personal choice,” and that Antigua and Barbuda’s 1995 Sexual Offenses Act “offends the right to liberty, protection of the law, freedom of expression, protection of personal privacy and protection from discrimination on the basis of sex.”

A gay man who worked for Antigua’s Ministry of Health had challenged the law, along with a local anti-rape group.

The 1995 Sexual Offenses Act criminalized acts of “buggery” and “serious indecency,” which were punishable by up to 15 years in prison. Though there is little evidence of the law being enforced in recent years, the U.K.-based Human Dignity Trust, which challenges the criminalization of homosexuality around the world, called the law’s very existence a violation of human rights which encourages acts of discrimination.

The High Court of Antigua & Barbuda has struck down laws that criminalised consensual, same-sex activity in people aged 16 or over. The court found sections 12 & 15 of the Sexual Offences Act 1995, which address the offences of buggery and serious indecency, are unconstitutional. pic.twitter.com/kEVbeVTJW1

Kenita Placide, executive director of the Eastern Caribbean Alliance for Diversity and Equality, said laws like this “legitimize hate speech, discrimination, and violence and tears at the fabric of our society.”

The Ministry of Health worker who challenged the law claimed to have experienced discrimination at work, with patients refusing his services. He also said he had been persecuted and assaulted for being gay.

High Court Judge Marissa Robertson said that “the right to privacy extends beyond the right to be left alone and includes the concept of dignity of the individual, aspects of physical and social identity, and the right to develop and establish relationships with other human beings.”

“After almost 150 years on the statute books, devastating countless LGBT lives in their wake, these colonial legacy laws have finally found their rightful place in the history books,” said Téa Braun, Chief Executive of the Human Dignity Trust.

The ruling makes the twin island nation the third Caribbean country to decriminalize homosexuality through the courts.

“This case will surely help spur further decriminalization across the Caribbean,” said Braun.