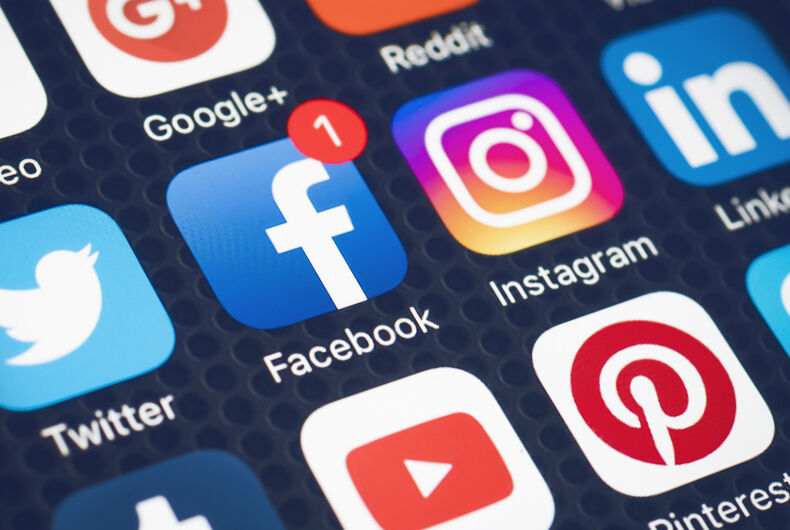 Facebook and Instagram both allowed anti-LGBTQ sentiment and misinformation to proliferate despite claiming to support the LGBTQ community during Pride Month, according to a pair of Media Matters reports released this week. Both social media platforms are owned by Meta, which publicly promotes its platforms as safe spaces for LGBTQ users.

Facebook enabled right-wing media to amplify anti-LGBTQ lies during Pride month, according to Media Matters. The progressive media watchdog group found that during the month of June, right-leaning pages posted about LGBTQ and Pride nearly 3,500 times and earned just under four million interactions.

“Facebook and its parent company Meta had eagerly promoted Pride Month, adding Pride features on the platform, claiming to amplify LGBTQ creators, and reiterating the company’s supposed commitment to supporting LGBTQ people and to eliminating hate speech targeting them. But Facebook has regularly failed to remove the dangerous and dehumanizing hate speech and misinformation targeting LGBTQ people coming from right-wing outlets, figures, and groups. And this Pride Month, under Facebook’s watch, posts that amplify longstanding, baseless, and dangerous rhetoric about the LGBTQ community proliferated across the platform,” the report found.

Instagram, meanwhile, allowed accounts with tens of thousands of followers to target the LGBTQ community with hate-speech, harassment, and bullying.

“During Pride Month, Meta announced it was ‘celebrating pride’ by launching Pride-themed stickers and avatars, a Global LGBTQ+ Cultural Guide, and an LGBTQ+ Safety Hub,” the report on Instagram reads. “Despite Meta’s newly announced resources, Instagram has allowed its users to spread propaganda against the LGBTQ community — and even against the same individuals it’s publicly celebrating. In several cases, these are accounts dedicated to targeting LGBTQ people, while in others, these are accounts of right-wing media outlets and personalities who also push anti-LGBTQ rhetoric. Many of these posts seem to violate Meta’s policies.”

Media Matters tracked a number of right-wing accounts on Instagram – including Libs of TikTok, which has become notorious on various social media platforms for posting anti-gay propaganda and encouraging followers to harass LGBTQ people – that have been allowed to post homophobic memes and disinformation to their hundreds of thousands of followers.

As Media Matters points out, the rise in anti-LGBTQ hate on social media has coincided with a wave of anti-LGBTQ legislation in state houses across the U.S. as well as Pride events being targeted by extremist groups this summer. “The false narratives right-wing figures are spinning to support these bills are being projected through online platforms and news outlets and have already led to real-world harm.”

“While some queer users are profitable for Instagram, especially during the month of June, its ongoing failure to address accounts actively spreading harmful rhetoric against the LGBTQ community make the platform’s ‘Happy Pride’ messaging hollow,” the report concludes. “Once again, Meta is showing that it will prioritize the engagement that these high-profile right-wing accounts generated through hateful, lie-filled content, even when it leads to real-world harm and the degradation of LGBTQ rights and safety.”

LGBTQ Nation reached out to Meta for comment and will update this article if they respond.