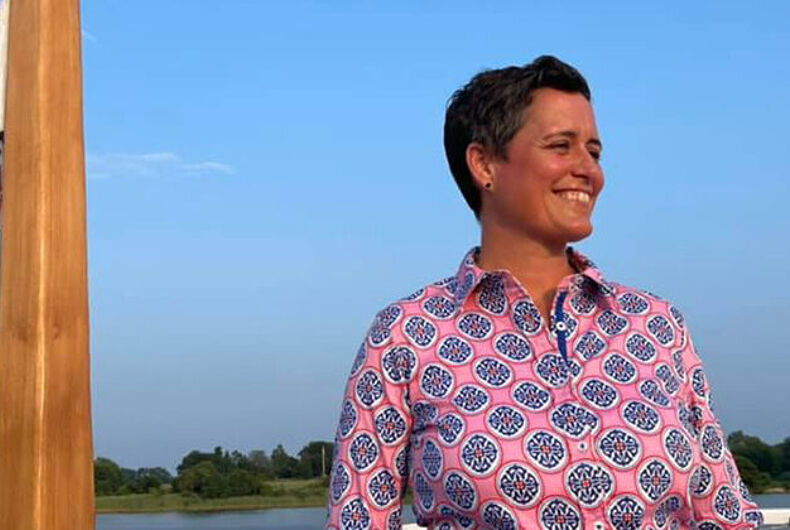 In the wake of the Supreme Court’s decision Friday overturning Roe v. Wade, Maryland Congressional candidate Heather Mizeur has a message for the women of America: “We do not have time to despair. We must act. That means taking to the streets to demand our voices are heard. It means helping women in states with trigger laws get safe access to abortion. And it means codifying abortion protections into federal law.”

Related: Roe v. Wade is dead. Ending marriage equality & and bringing back sodomy laws are next.

Mizeur, 49, aims to do just that in her race to unseat the six-term hyper-MAGA Republican in Maryland’s 1st Congressional district in November.

This is a dark day for America. Abolishing the established right to abortion – one that has been settled law for half a century – should have been unthinkable. This decision will cost lives. I will not back down at this critical time when our rights are under attack.

Mizeur is the overwhelming favorite in the Democratic primary on July 19, and she’s out-raised Harris in campaign donations with more than $1.7 million to the Republican’s nearly $1.3 million.

But Mizeur’s is an uphill battle in the solidly red district, the only one of eight in Maryland dominated by Republican voters.

Redistricting in the state this year helped move the needle in Democrats’ direction: former President Donald Trump won the old 1st District by 20 points, but with the new boundaries, that lead is cut to +14. It’s still an uphill battle.

“Over the decade that Andy Harris has been in office, he has never seen a challenge like this one,” says Mizeur.

He’s railed against abortion access and legal cannabis in the District of Columbia; opposed naming a North Carolina post office after Maya Angelou, calling her a “communist sympathizer”; condemned  “COVID positive illegal aliens being dispersed into our communities” rather than vote for a resolution condemning the Myanmar coup; voted “present” on a bipartisan resolution condemning QAnon; and twice joined a small minority of Republicans to vote against awarding Capitol Police officers congressional medals of honor for their heroism at the January 6 insurrection.

On that night, following the Mob’s effort to stop President Joe Biden’s certification, Harris nearly got into a brawl on the House floor as he objected to the results. Two weeks later, he set off a magnetometer near the House chamber while carrying a concealed gun into the Capitol, earning him the epithet Handgun Harris.

That and his full-throated support of former President Trump’s Big Lie, before and after January 6, prompted dozens of elected Maryland Democrats to demand his resignation.

“Consistently he’s standing on the side of the most fringe elements of his party,” said Mizeur,

He’s also broken a pledge to limit himself to six terms, while trying to have it both ways on Trump’s Big Lie: “If President Trump had won reelection, I would have felt enough of my mission was accomplished to step aside,” Harris told The Washington Post.

Mizeur is on a mission to hold Harris to his word, and push him out if won’t go willingly.

The former congressional aide was born and raised in Illinois to a five-generation farming family, and a father who was a lifelong United Auto Worker. She graduated Valedictorian in her high school class.

Mizeur went on to attend the University of Illinois, but dropped out after three years when an internship in the Washington office of then-Rep. Marjorie Margolies (D-PA) turned into a full-time job. She went on work for Rep. Sheila Jackson Lee (D-TX), and later Rep. Joseph P. Kennedy II (D-MA) as his legislative director.

Mizeur rose to Director of State Affairs at the National Association of Community Health Centers, and in 2003 joined the Kerry campaign as director of domestic policy, where she authored much of the health care platform for his 2004 presidential run.

Mizeur met wife Deborah while on the Kerry campaign. The couple married in 2005.

Mizeur was first elected to public office in 2003, when, at 31, she won a seat on the Takoma Park, Maryland City Council. In 2006, she won the first of two consecutive terms in the Maryland House of Delegates, where she fought for marriage equality and affordable health care.

Mizeur lost a grassroots bid for the Democratic nomination for Maryland governor in 2014.

Since then, Mizeur has advocated her social justice agenda through a non-profit she founded called Soul Force Politics, dedicated to bridging the political divide in American civic life. And she started an organic farm with wife Deborah, a clinical herbalist and nutritionist, on 34 acres on Maryland’s Eastern Shore in the 1st District.

Unlike Mizeur, Harris is no longer a constituent in his district, after redrawn maps moved his primary residence into a neighboring jurisdiction.

“It’s no coincidence that the only incumbent drawn out of his district is the Republican,” Harris told The Baltimore Sun, “another example of the extreme partisan gerrymandering that disenfranchised hundreds of thousands of Maryland Republicans.”

“This is our map. This is our new community,” says Mizeur. “I’ve always said I’m going to defeat Andy Harris no matter what the map looked like.”

“Andy Harris is scared, and he should be.”

Editor’s note: An earlier version of this article said that the primary election is scheduled for July 21 instead of July 19. We regret the error.