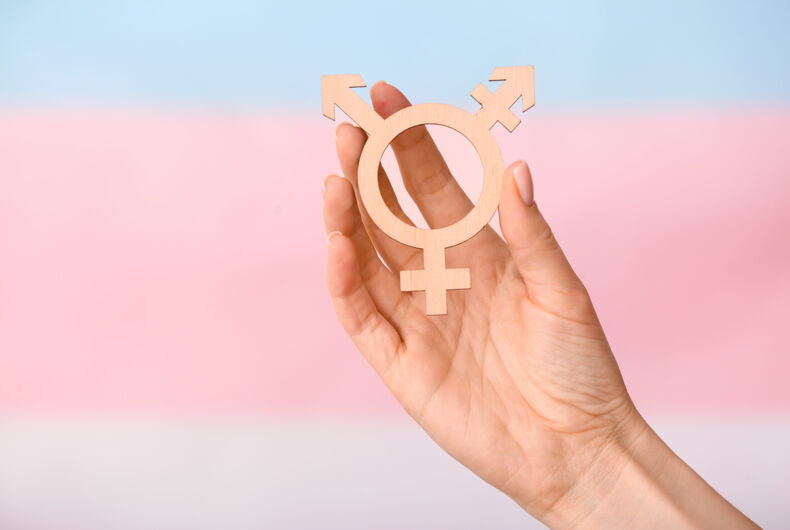 You may be familiar with the transgender flag, a five-striped flag consisting of the colors pink, blue, and white that is used by the trans community as a symbol of pride. But there is another transgender symbol that you might not be as familiar with.

Here, we take a brief look into the transgender symbol, its meaning, and origin.

What Is The Transgender Symbol?

The trans symbol is a pictogram consisting of a circle with an arrow sprouting from the top-right side, a cross at the bottom, and a stroked arrow at the top-left side. This symbol combines the male gender symbol, the female gender symbol, and the symbol for androgyny.

According to Nancy R. Nangeroni, founder of the award-winning talk show GenderTalk Radio, this symbol was designed by Holly Boswell, Wendy Parker, and Nangeroni herself sometime in the 1990s. Nangeroni credits Boswell for first drawing the symbol for Parker, who then convinced Nangeroni to create a digital version.

Nangeroni’s version depicts the symbol in bright blue encased in an inverted lavender triangle. The triangle calls back to the pink triangle that was once used to identify gay prisoners in Nazi Germany.

On the GenderTalk website, Nangeroni describes the glyph as a “symbol for the transgender community. A symbol of pride and freedom. A rallying point,” and states that the symbol “includes everyone, excluding none.”

A Brief History Of Gender Symbols

The gender symbols that many of us are familiar with today have been in use since as early as the 16th century.

The first recorded use is credited to botanist Carl Linnaeus, who, in his published works Mantissa Plantarum and Mantissa Plantarum altera used the male symbol or ♂ to denote “male” flowers (those with stamens only), the female symbol or ♀ for “female” flowers (those with pistils only), and the “hermaphroditic” or ☿ symbol for perfect flowers that had both stamens and pistils.

These symbols are believed to be based on ancient astronomy, which associated certain celestial objects with gods. In Greek astronomy, the planet Venus was named after the goddess of love, fertility, and femininity. The feminine symbol was said to represent Venus’ hand mirror.

The planet Mars, on the other hand, was named after the god of war and masculinity – thus, the male symbol is fashioned after Mars’ shield and spear.

As Ancient Greek alchemists and metallurgists also associated gods with particular metals, they also assigned these symbols to their respective gods/metals. Iron corresponded to Mars, perhaps for the planet’s red color, while copper – which in Greek translates to “light-bringer” – corresponded to Venus, perhaps for the planet’s brightness in daylight. Ancient scripts shows how these symbols were used as a shorthand for these metals’ names.

The LGBTQ community has a long history of inventing and adopting existing symbols to represent the diverse identities that fall under the queer umbrella. Here are some notable examples:

The null symbol, depicted as a circle with a back slash going through it, is commonly used in mathematics to depict an empty set, or in linguistics to denote zero. The symbol was adopted by a small faction of agender or neutrois people – those who identify as having no gender or “genderless”.

Some agender people use a similar “null” symbol with a line branching out from the top of the circle, expressing their lack of gender by removing what would typically be an arrow or a cross to depict either male or female.

The double female symbol, which features two interlocking female gender symbols, is often used as a symbol to represent lesbians and women loving women (WLW). This symbol features in early variations of the lesbian flag.

The intersex flag features an “unbroken and unornamented” purple circle to denote the “wholeness and completeness” of intersex people and their “potentialities”.

The Transfeminist And Trans Equality Symbols

Both of these symbols build on the transgender symbol.

The transfeminist symbol consists of a transgender symbol with a raised fist inside the circle to represent the fist of power – a symbol commonly used by the radical feminist movement.

The trans equality symbol incorporates an equal sign inside the circle of the trans symbol, emphasizing the need to fight for equal rights for transgender people.

Related: What it means to identify as neutrois