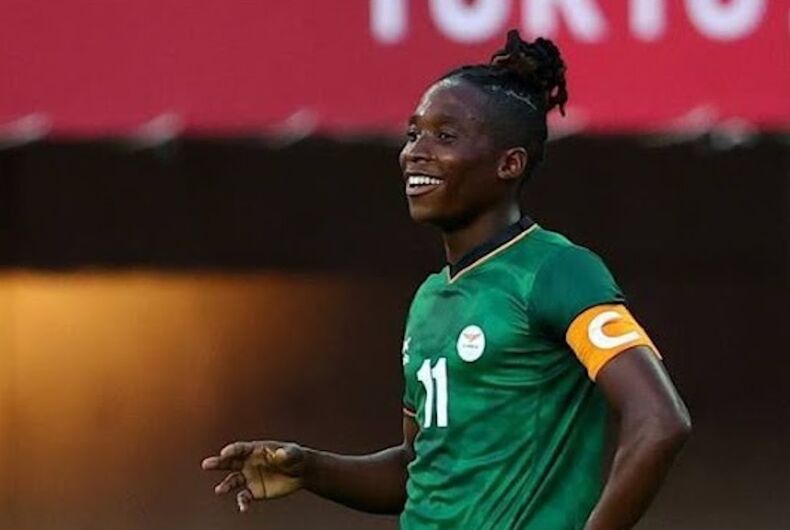 Barbra Banda, the 22-year-old captain of Zambia’s national soccer team who competed in 2021 Tokyo Olympic Games, has been barred from competing in the Africa Cup of Nations tournament after a “gender verification test” determined that her testosterone levels are too high.

Banda was one of four players barred from Zambia’s tournament team over the testing. She submitted to hormone suppression treatment, following the test, but her testosterone levels had not reached sufficiently low levels to allow her to compete. Her case is similar to that of Caster Semenya, a South African lesbian sprinter who was barred from competing over her high testosterone levels.

The test, administered by the Confederation of African Football (CAF) — the continental body that oversees the tournament — follows guidelines laid out by FIFA, the international governing body of soccer.

Meanwhile, Andrew Kamanga, president of the Zambia Football Association (FAZ), said he’s working with CAF to find a solution to Banda’s barring, though it’s unlikely she’ll compete in the tournament.

FAZ communications director Sydney Mungala told ESPN, “Many players can be affected by these regulations, and football is their livelihood. I think the CAF regulations are a lot more stringent [than Olympic regulations], and they put too much stress on testosterone levels.”

In 2018, World Athletics, the international body governing track-and-field events, instituted a rule to establish testosterone limits for female athletes. The rule barred South African runner Caster Semenya from competing after testing from World Athletics detected a “rare medical condition” of high testosterone in her body that gave her an “unfair advantage.”

Semenya was told to take medication that would lower her testosterone level, but she said, “It made me sick, made me gain weight, panic attacks, I don’t know if I was ever going to have a heart attack.” Caster is awaiting a verdict from the European Court of Human Rights in her case challenging World Athletics’ decision.

Some criticized World Athletics’ rule as having undertones of European racism and imperialism. Black women’s bodies have a long history of being considered too masculine by Eurocentric body standards.

In 2021, two 18-year-old cisgender sprinters from Namibia, Christine Mboma and Beatrice Masilingi, were banned from running in the Olympic 400-meter dash because they have a “natural high testosterone level.”

Others have criticized such testing and rules as discriminatory against intersex athletes. Intersex people are born with any number of chromosomal, gonadal, hormonal, or genital features that cause their bodies to physically manifest some combination of stereotypically male or female biological features.

Someone can have intersex features without identifying as intersex, and there are intersex people of all genders. It’s unclear whether any of the women targeted by the ban identify as intersex.

All about the transgender symbol