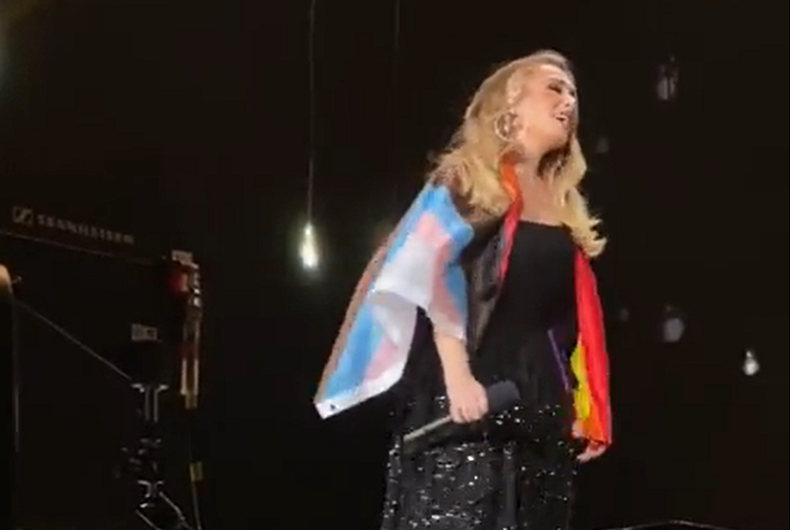 Adele with the Pride flagPhoto: Screenshot

An Adele superfan experienced “the most magical, perfect, mind-blowing pride” of his life when the singing star asked to borrow his Pride flag and serenaded him at London’s Hyde Park along with friends and 65,000 adoring fans.

Dean William, a teacher from Essex, recounts starting the day with two friends at a bottomless brunch after snagging tickets to Adele’s show at the British Summer Time festival in London’s Hyde Park, the same day as the 50th anniversary celebration of London Pride.

Shortly after arriving at the festival grounds in the early evening, a staff member approached to ask flag-wearing William a favor.

“She asked if she could borrow mine so… OF COURSE I SAID YES! Then we were whisked away into the Diamond VIP section and given a LOT of drinks tokens.”

She asked if she could borrow mine so…OF COURSE I SAID YES! Then we were whisked away into the Diamond VIP section and given a LOT of drinks tokens. This is the woman who approached us and too such good care of us ❤️. pic.twitter.com/6GkRhjmN6f

William and his two friends found themselves rubbing shoulders with celebrities in the VIP area during renditions of “Hello” and “I Drink Wine” before Adele stopped the show to ask, “Is there a Jack and Dean somewhere?”

We were stunned. This was a dream! Before long @adele came on stage and blew our socks off! Of course, singing Hello. pic.twitter.com/6PjtYDZBXE

Adele continued: “Do you remember earlier on when you were coming in someone came and said ‘Can we have your flag in return for some drink tokens?’”

“8 quid from Holbein station!” William shouts, referring to the cost of the flag he’d bought.

“8 quid?” asks Adele from the stage. “And how much in drink tokens?”

“Oh, really?” replies Adele, whom William has laughing. “Are you drunk?”

AND the most awkward drunk conversation of my life @Adele. pic.twitter.com/5pVSAlj4d5

“Well I wanted that flag for later for what I’m doing, and they said you burst into tears because you got moved to the front, so I thought I’d give you front row seats.”

Security ushered the trio of friends towards the stage, lifting them over the foremost barrier.

As the Tottenham-born singer reeled off hits for the capacity crowd including “Someone Like You” and “Rolling in the Deep,” William and friends were in thrall.

“There was no-one between us and Adele, other than a couple of guards,” Jack added. “She was leaning towards us, smiling. It was crazy.”

Just before a rendition of “When We Were Young,” Adele pulled William’s Progress Pride flag over her shoulders.

“Happy Pride. I wore my hair out today to try and be a bit draggy,” she joked.

Then, during When We Were Young, @adele appeared wearing the very flag we bought for eight quid at Holborn station just hours before! I cried. pic.twitter.com/DPuyOFYIIm

“To have someone with that level with that platform, 65,000 in front of her, stand as an ally and make you feel safe is phenomenal.”

Finally, during Love Is a Game, Adele blew a kiss to the friends before returning the flag to William.