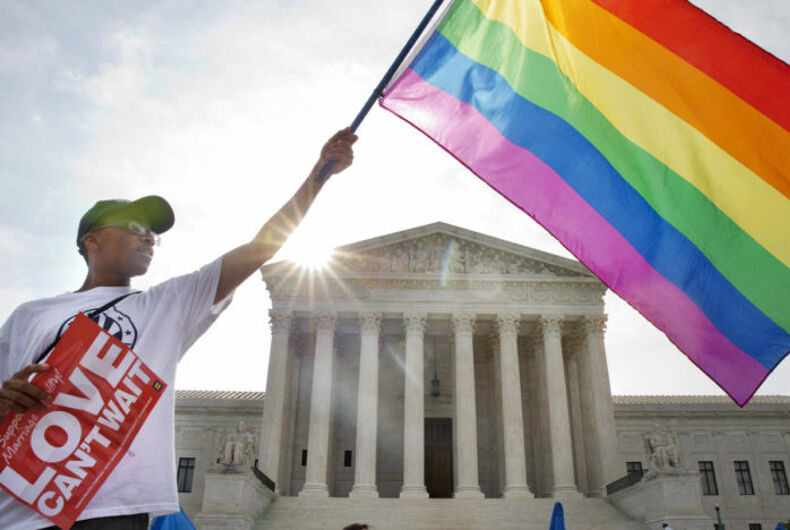 Carlos McKnight of Washington, waves a flag in support of gay marriage outside of the Supreme Court in Washington, Friday June 26, 2015. A major opinion on gay marriage is among the remaining to be released before the term ends at the end of June. Photo: AP Photo/Jacquelyn Martin

One of the unexpected bits of news last week was the surprisingly large number of Republican representatives who voted in favor of the Congressional Respect for Marriage Act, which would protect the right to marry for same-sex couples. While 157 Republicans voted against the bill, 47 Republicans supported it, a far larger number than anyone anticipated.

Even though the overall GOP vote was 2-1 against the bill, the media seized on the minority vote as a sign of a sea change in the party. “GOP support for same-sex marriage bill reflects a shift among Republican voters,” NBC news declared. And it is true that even a majority of Republican voters now say that they support marriage equality, although at a far lower rate than the general American population.

Unlike in the past, the GOP leadership did not press its members to vote a specific way on the measure. They left the vote up to the individual member, which was a signal that the party didn’t think this was a critical issue. Almost all the Republicans voting for the legislation represented areas where outright homophobia wouldn’t play well: the northeast, Florida, California.

There was also a sizeable contingent from Utah, a sign of the relatively moderating influence of the Mormon Church. By contrast, only one Texas Republican voted for the bill.

The real question, however, is what the vote means in terms of the cultural war that the base is waging against the LGBTQ community. At the same time that a minority of Republican members of Congress were expressing their support for marriage equality, a sizeable contingent in the party – the one that seems to be driving the GOP’s direction – was pushing for a far more punitive approach to anything LGBTQ related.

In Texas, State Attorney General Ken Paxton has made it clear that he would like to bring a case that would allow the state to restore its sodomy law, overturned by the Supreme Court in 2003.

At a candidate debate in Michigan, all five GOP candidates running for the party’s nomination for governor in Michigan refused to defend marriage equality. One candidate, Garrett Soldano, has run ads complaining about the “woke groomer mafia.” In Florida, Gov. Ron DeSantis (R) signed the Don’t Say Gay bill, which forbids teachers from any mention of LGBTQ issues, while his press secretary libeled anyone who opposed the bill as a “groomer.”

Then there are the more local attacks on school libraries, because they carry LGBTQ-friendly books. The religious right is actively recruiting members to run for local school boards to further the attacks, and you know that the candidates aren’t going to have a D next to their name on the ballot.

Finally, there is the signal from the other side of Congress. The day before the House took up the Respect for Marriage Act, Ted Cruz said that Obergefell, the Supreme Court case that decided marriage equality, was “clearly wrong.”

If the preponderance of energy is pointing in one direction, you have to believe that that’s the direction the party is heading. While it’s nice to acknowledge the 47 representatives who went on record with their support for marriage equality, their support is largely symbolic. If the party’s base pushes hard to punish LGBTQ people, the 47 members aren’t going to rise up as a group and demand they stop. (There wasn’t a mass uprising from the Florida contingent when the Don’t Say Gay bill went down.)

If the Supreme Court really wants to decide that Ted Cruz is right, they can overturn marriage equality, just as they overturned abortion rights. Clarence Thomas and Samuel Alito have already said marriage equality was a bad decision. Republicans may issue some statements of concern and regret but the vast majority will go along with the ruling, just as they’ve gone along with every other attack that the party has mainstreamed.

There’s little principle left in the party other than holding onto power. Don’t let 47 votes convince you otherwise.