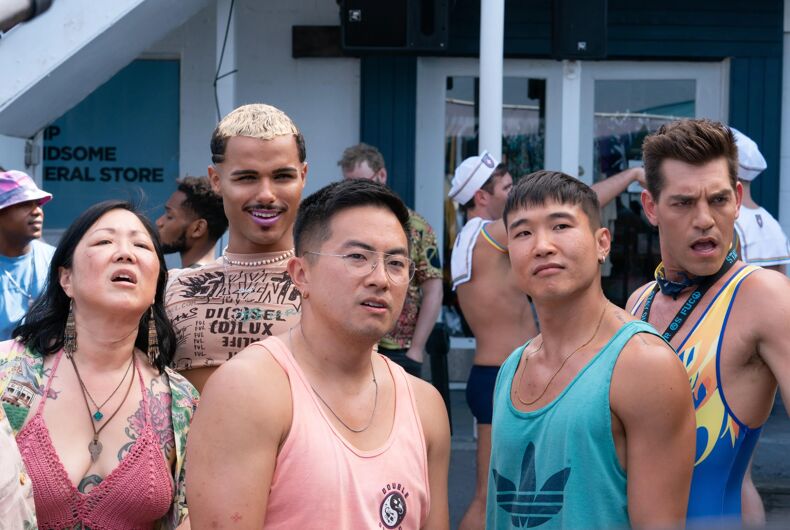 The new romantic comedy Fire Island has been getting a lot of love from the queer community online. But one writer’s take has gay Twitter rallying to the film’s defense. On Monday, writer and podcast producer Hanna Rosin tweeted that the film failed the “Bechdel Test” and criticized its portrayal of lesbians.

“Do we just ignore the drab lesbian stereotypes bc cute gay Asian boys? Is this revenge for all those years of the gay boy best friend?” Rosin wrote.

So @hulu #FireIslandMovie gets an F- on the Bechdel test in a whole new way. Do we just ignore the drab lesbian stereotypes bc cute gay Asian boys? Is this revenge for all those years of the gay boy best friend?

Fire Island, written by and starring out comedian Joel Kim Booster, is a modern take on Jane Austen’s Pride and Prejudice, transposing the story’s romantic and class dynamics in the context of the storied queer summer get-away off the coast of Long Island, New York. Booster and co-star Bowen Yang star as best friends who deal with various romantic and sexual entanglements while navigating their feelings of alienation as Asian Americans amongst the largely white gay community.

Rosin presumably took issue with the fact that the film, which centers the experience of gay Asian American men, failed to include a scene in which two women discuss something other than men. Her tweet references The Bechdel Test, a set of criteria popularized by lesbian cartoonist and Fun Home author Alison Bechdel.

Twitter users called out Rosin for what many saw as an inappropriate application of the test.

There are roughly 400 movies that come out every year. It's an odd choice to Bechdel test-tweet the only one this year (in the history of cinema?) about a group of gay Asian American menhttps://t.co/JzQ8bk1Ljw

Hanna gets an F- at reading the room. https://t.co/meJSdUUvKP

Don't hate on #FireIsland It just means someone needs to write their own movie: #CherryGrove

This goes so far beyond bad and deeply out of touch that it spirals into cruelty and racism. This is the worst thing I’ve read on here today, and on a day when people are retweeting Matt Walsh all day long, that speaks volumes.

Hanna this is tiresome because it’s not a good faith application of the Bechdel test, or rather, FI fails rather intentionally.
You know that, so it feels like this is mostly for the reaction, because surely you’re aware that gay Asian men are rarely/never centered this way.

Comedian Margaret Cho, who stars in the film as a lesbian friend who opens her vacation home to the main characters, even weighed in: “I didn’t realize I was drab. I don’t identify as drab. Bitch I’m fab!”

I didn’t realize I was drab.
I don’t identify as drab.
Bitch I’m fab! ❤️ https://t.co/p8aBdmZywq

Rosin, a journalist and podcast producer, co-founded Slate’s now-defunct women’s site DoubleX and is the former co-host of NPR’s Invisibilia podcast. She rose to national attention for her 2012 book The End of Men: And the Rise of Women, in which she explored the idea that women were outpacing men in most areas of American life. Last year, Rosin wrote about the “tragic naivete” with which she approached the topic back a decade ago.

In 2009, she published a long reported feature in The Atlantic about transgender youth, questioning the wisdom of parents who affirm their children’s identity and fretting over the use of puberty blockers. The piece, titled A Boy’s Life, repeatedly misgendered the then-8-year-old who was its focus along with other trans kids.

As of Tuesday afternoon, Rosin has yet to respond to her critics.