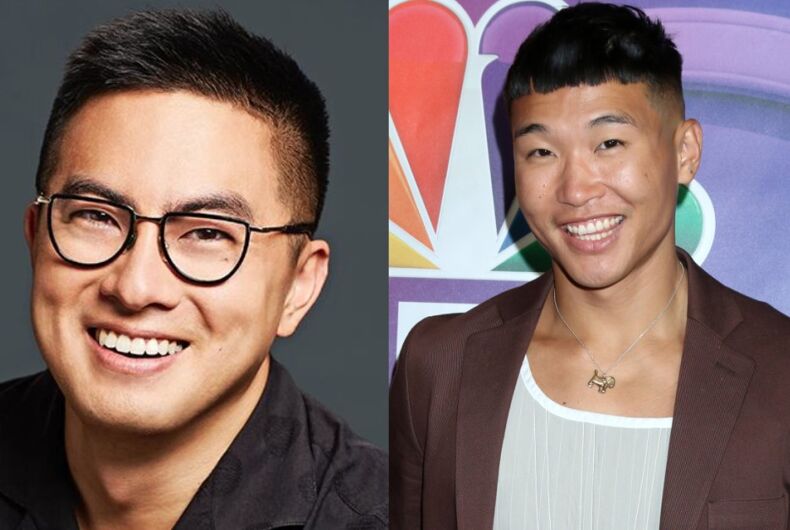 After tackling Kim Jong-un, Fran Lebowitz, and The Iceberg That Sank the Titanic, Saturday Night Live’s Bowen Yang is about to take on Jane Austen’s Pride and Prejudice.

The out comedian has been named to co-star in Fire Island, a film inspired by Austen’s 1813 literary classic about Regency romance in nineteenth-century England, only this time it’s a gay rom-com set in modern-day New York.

Out actor, writer, and comedian Joel Kim Booster wrote the script and will co-star with Yang, and Queer Korean-American filmmaker Andrew Ahn is the director. It’s the first leading role in a film for either Yang, 30, or Booster, 33. It adds Yang to the long list of SNL cast members who have made a film, from Dan Aykroyd and John Belushi to Kate McKinnon and Pete Davidson.

According to Variety, Yang and Booster will play two best friends who go on a weeklong vacation to the LGBTQ hotspot and when they encounter a diverse mix of eclectic characters. Hilarity ensues.

It’s not exactly clear how Fire Island will stand in for Hertfordshire and Derbyshire, the settings for Austen’s novel. According to Vulture, the film will “riff on Jane Austen’s timeless tale of negging and intra-class distinctions.”

On Twitter, Ahn called it simply “a gay Pride and Prejudice on Fire Island.”

THIS IS MY JURASSIC WORLD. THIS IS MY ETERNALS. A GAY PRIDE AND PREJUDICE ON FIRE ISLAND WITH @ihatejoelkim AND BOWEN YANG! https://t.co/CEdp4jNND5

Set in 1812, Pride and Prejudice has inspired numerous adaptations, including a faithful six-hour BBC miniseries in 1995; Bridget Jones’s Diary, a 2001 interpretation with a contemporary twist; and a 2005 version starring Keira Knightley and Matthew Macfadyen. Not to be overlooked: the 2016 film Pride and Prejudice and Zombies, a horror-comedy that blended Regency-era romance and zombie mythology.

Backed by Searchlight and produced by JAX Media, Fire Island is expected to start filming in New York City and on Fire Island next month. The film will be released on Hulu in the U.S. and will stream on Disney Plus’s Star brand outside the country. A release date hasn’t been announced.

People living with HIV have about the same early death rate as everyone else, study finds