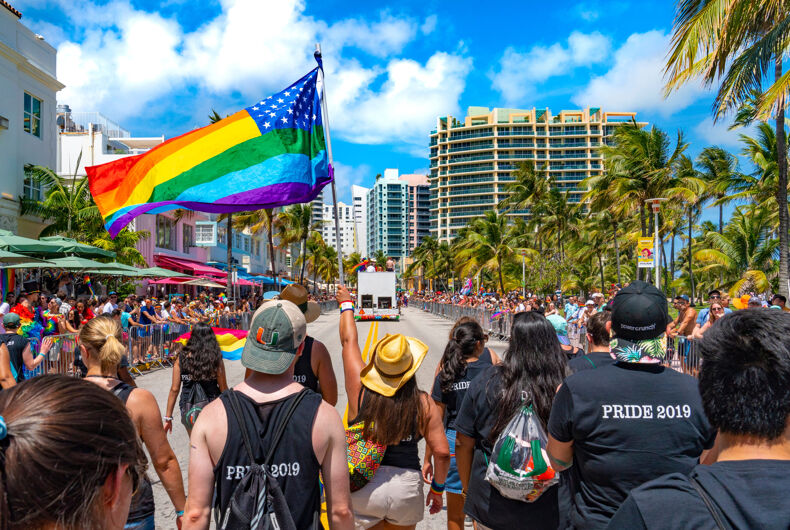 A 17-year-old is in Canadian custody for threatening a mass shooting in West Palm Beach after an international investigation.

The suspect posted a threat online to shoot people at the “Pride on the Block” event. Authorities stopped the potential mass shooter before he could hurt anyone at Pride.

Related: 6 Pride events that went on in the face of violent threats

Deputy Chief Rick Morris spoke during a press conference, saying, “I can say through his statement that there’s no remorse.” The suspect was caught posting a video on Omegle where he was wielding a gun according to the police.

Police said the video included chilling details of the proposed attack, anti-LGBTQ comments, and even mentioned which block he was going to commit the mass shooting on the day of the event.

The West Palm Beach Police Department said in a statement that their officers collaborated with the FBI, New York Police Department, Toronto Police Service, and Peel Regional Police to find the location of the suspect.

The teenager was arrested in Canada in the early hours of Monday, June 6, and the video, as well as the firearm that was seen in the video, were recovered at the time of the arrest.

Canadian authorities have charged the suspect with threatening to commit a mass shooting, and similar charges are pending in Florida, including written or electronic threats to kill, do bodily injury, or conduct a mass shooting or an act of terrorism.

This isn’t the first time that a Pride event has been threatened by a terrorist.

Back in 2017, a Columbus city employee made a comment on the Facebook event for Columbus Pride calling for the death of LGBTQ people.

At the time, Stonewall Columbus executive director Karla Rothan said, “There are people out there that are homophobic and they will say some negative things.” She assured people that the event would be safe. Fortunately, nothing happened at the Pride event.

Internationally, Pride events have been targeted by online attacks in the past.

In 2017, the Kyiv Pride in Ukraine and the Tel Aviv Pride Parade were targeted by attacks on Facebook as well as in-person where protestors burned rainbow flags. A Pride event in Beirut was canceled in 2017 because of terror threats.

In 2016, Toronto almost canceled its Pride event due to threats made online. Luckily, the event went on without incident. Internationally and domestically, Pride can’t be stopped by those looking to inflict terror on the LGBTQ community.