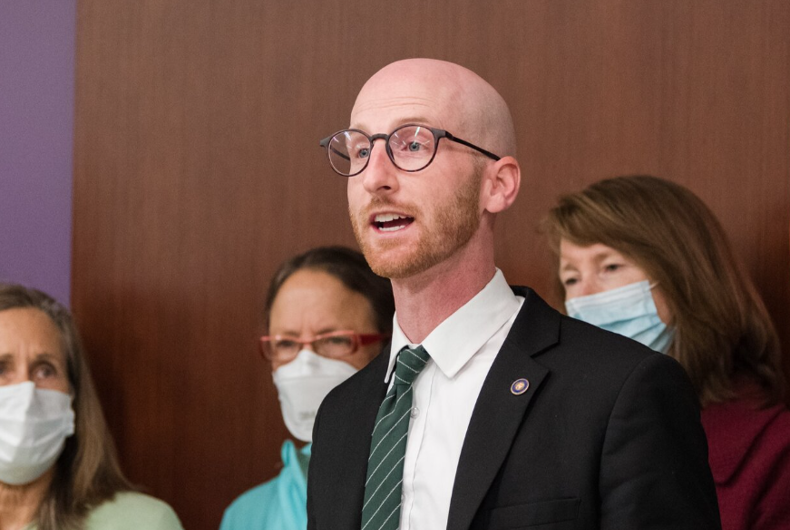 “We need to protect the right to marry at the state level because we don’t know what will happen at the federal level from the Supreme Court,” Obergefell said.

The recently leaked draft opinion from the Supreme Court indicating Roe v. Wade will be overturned signals marriage equality could be in danger as well. Roe v Wade and the Obergefell decision rely on similar interpretations of the right to privacy in the Constitution.

Obergefell said: “I am here today to call on every state that still has laws on the books prohibiting marriage equality to do more.”

Kitchen, Utah’s only out gay legislator, was one of the plaintiffs in the case that brought marriage equality to Utah in 2014. Utah was the first state to ban same-sex unions, passing a law banning marriage equality in 1977, a statute that federal courts stopped the state from enforcing.

In statute, however, Utah still recognizes marriage only between different sexes: “It is the policy of this state to recognize as marriage only the legal union of a man and a woman.”

Standing on the steps of the Utah Capitol Tuesday, Kitchen said that has to change.

Current Utah Code. Title 30. Chapter 1. Section 4.1. 1A
“It is the policy of this state to recognize as marriage only the legal union of a man and a woman as provided in this chapter.”

I have opened a bill file to officially codify marriage equality in the State of Utah. pic.twitter.com/k0ebKGbN7a

“We will not go back. We have come too far to go back. We must defend our progress. We must be proactive by removing this exclusionary language from Utah code. We are legislating with our eyes wide open because our history tells us that we have to.”

In Utah, changing state code is just one part of the equation. A constitutional amendment banning same-sex unions was approved by voters in 2004.

“That constitutional amendment needs to be removed,” Kitchen said. “In addition to that, we need to address all statutes throughout state code that specify that the state will only acknowledge opposite-sex couples because what that does is it leaves same-sex couples in a vulnerable position.”

Kitchen wants to “make sure that couples who are currently married stay married no matter what happens.”

Justice Samuel Alito, author of the Dobbs v. Jackson Women’s Health Organization draft decision imperiling abortion rights, voted against the right to same-sex marriage when that case was decided in 2015.

Pride In Pictures: House of Prism works at pride