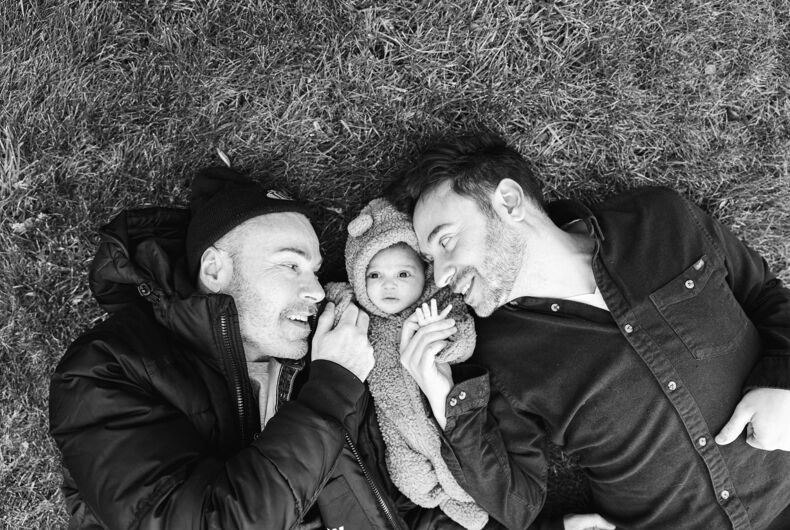 How can I change the trajectory of my life so that childhood trauma doesn’t define me? That was a question I often asked myself in my journey to become who I am today. I did an enormous amount of hard work to get past that trauma but in my quest to embrace love and kindness, I didn’t necessarily see fatherhood in the picture.

Until I met Jordan.

Related: This was what happened when I was called into the principal’s office when my child said he is trans

Jordan is eight years younger than my 47 years and after meeting in 2012 we realized we were a perfect match. Pretty early on in our relationship Jordan said, “I want to be a dad, I am going to be a dad.” It was the first time that I ever really considered fatherhood and a family to be a true possibility.

Fast forward to 2017 and our wedding and the initial steps we took to lay the foundation for our future family including finding an accepting, inclusive neighborhood and buying our first home. The next step for us was deciding to start a family.

But what would be the right option for us? Surrogacy? Adoption?

After careful consideration, we chose the adoption route as we felt we had the opportunity to provide a loving life to a child who otherwise may not have one. That was the most important aspect of choosing adoption for our journey to parenthood.

Finding the right adoption path can be a challenge and we didn’t automatically go to an agency. Initially, we decided to go it alone with the help of an adoption attorney. After a year of placing ads in “penny-savers” and local newspapers advertising “two dads seeking to adopt” with varying levels of response ranging from potential scammers to absurd to concerning – we decided to make a change.

There are so many reputable and welcoming adoption agencies. We were lucky to find Friends in Adoption, an inclusive, LGBTQ-friendly organization that welcomed us with open arms. Once we made it through all the requirements, for a second time, we were on our way to finding our future child.

While I tend to be a person who believes in fate and destiny, my husband Jordan is not. People don’t often talk about the dynamics in the relationship of the parents in this journey. While we were on this mission together, we often experienced very different emotions. I felt strongly that it was meant to be, and it would happen in good time. Jordan, however, often had doubts and worried if all our efforts would be for nothing in the long run.

It was important for us to recognize our fears and talk through them as a couple. Ultimately our support of each other’s worries and concerns enabled us to even more fully commit to the desire to become parents.

In March 2021, while on a trip to Sedona, we were at a low point in our journey. We were doing a lot of waiting with little progress and worried the pandemic would slow things down even further. While in Sedona, I channeled the spirituality of that special place to find peace in this journey. Little did we know at the time that while we were seeking solace on this getaway, our future child was conceived. Looking back, it seems almost destined to be.

But the journey was not without additional disappointment. Soon after our return, we were matched with a young mother in Mississippi. Despite exchanging many texts, a seemingly strong connection, and a level of comfort between all of us – she stopped communicating after two months of exchanging messages. While this felt like a setback and made us consider reevaluating our path, I knew deep down that our baby was out there, and the journey was worth continuing.

It was months later in November, but we were matched again. This time with a mother (we will call her Lisa) in Tennessee who was believed to be early on in her pregnancy. It felt very similar to the previous match and our emotions were high for fear the same disappointment could happen.

Much to our surprise, what we thought was going to be a call to iron out details about how we could communicate with Lisa turned out to be a call saying she was in labor. On the next call we were asked to get to Tennessee as soon as possible because Lisa had just given birth. Luckily, despite thinking she was early in her pregnancy, Lisa was actually 37 weeks pregnant, so the baby was not born premature.

It was on that call that we found out that we had a daughter, and we named her Charli.

Charli had arrived and while we knew, deep down, Lisa was solid in her decision and had chosen us to be Charli’s parents, the next few days were hard. Emotions were high for us and for Lisa as a new mother experiencing a surge of hormones and coming to terms with her decision.

Lisa asked to keep Charli in her room for an extra night. I would be lying if I said that didn’t scare us. We knew that Lisa had 30 days to change her mind. What if she decided we weren’t the right parents? What if she decided she wanted to keep Charli? I never dreamt how quickly we would become attached. But again, I firmly believe in destiny and told Jordan, “Who are we to say Lisa shouldn’t keep her baby if she decides that’s what she wants?” We wanted her to be able to make that decision and be 100% clear that this is what she wanted in her heart.

We arrived in Tennessee not knowing what to expect and eight days later we were bringing our daughter home on a full plane in the middle of a pandemic. Nerves were on edge, but joy won the day. Charli was introduced to our family and friends and truly was a gift to all of us on her first Thanksgiving.

Some people may not realize that even after you bring your baby home, there is still a 30-day waiting period. So, the biggest celebration came on finalization day where we were joined by family and friends via zoom and in-person at the courthouse and finalized the paperwork to officially become Charli’s parents.

I never would have thought that one of my greatest fears would be more about how Charli is perceived as an adopted person vs the potential discrimination as the daughter of a same-sex couple. Our goal is to be open about all of it. There is no shame in being multi-racial, being adopted, or being part of a same-sex family. What a gift Charli is that she has such a diverse background to share with the world.

If I could give any advice to same-sex couples considering adoption or even going through the process now – it would be to open your heart to all your options. Our willingness to not restrict our search with specific parameters (male/female, multi-race, etc.) allowed us to be matched much more quickly. Additionally, work through the low points and stay on course. Be proactive and reach out to your adoption agency frequently so they know how committed you are.

As we prepare to celebrate our first Father’s Day, I think about progress… The progress that I have made as an individual to move past trauma and open my heart to experience love in all its forms. The progress that is being made in the world of same-sex families. How everyone that Jordan and I encountered along this journey has been supportive and loving. The world often hears about a lot of the bad, but I am encouraged by the changes we see in society including the true normalization of same-sex families.

On this first Father’s Day, we encourage others to open their hearts to this journey. If you are hesitant because you are worried about discrimination or challenges, know that the challenges make the reward even sweeter. There may be disappointment along the way but with perseverance, a support system (even if you don’t have a supportive family, there are many groups you can join), and an open heart and mind, the joy of motherhood or fatherhood can be achieved.

As creative director at Health Care Advocates International (HCAI), a health and advocacy organization serving the needs of the LGBTQ+ community through prevention, programs, education, advocacy & treatment, Thomas creates multimedia campaigns such as Stigma Warrior, HIV Equal and now HIV Advocates. The Stigma Warrior Campaign is a social media and web-based initiative that encompasses the innumerable stigmas faced by the LGBTQ community highlighting local celebrities and everyday people either overcoming their own struggles or helping others as they strive to live fulfilling lives as their authentic selves. Thomas’ dedication and passion for what he does shine through his work. He uses digital photography and social media to deliver a much-needed message of hope and optimism.