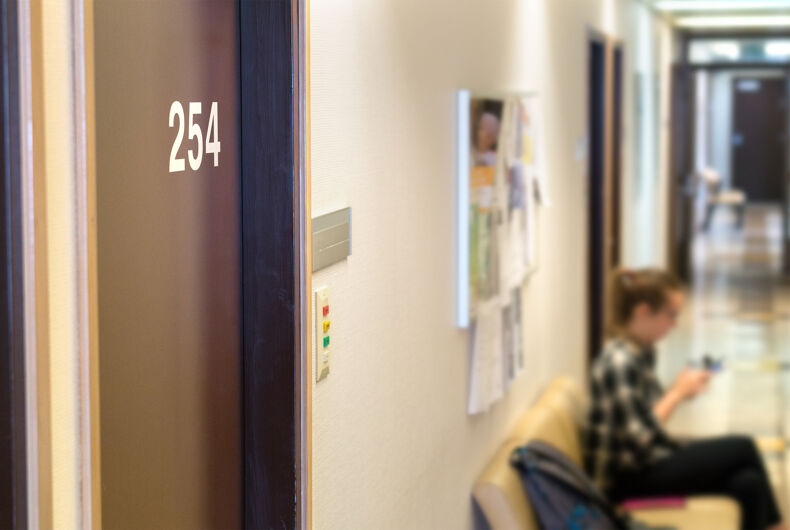 Each of the four times I was handed my babies when they were born, I was drowned with equal amounts of joy and overwhelming responsibility for the safety and wellbeing of the tiny humans. Many parents feel a duality of love and fear raising their kids. As the parent of a transgender child, I assure you that we feel that duality even more. The current trend of legislation targeting trans kids and their families takes away our focus on raising these exceptional humans with love and joy by filling us with fear.

I was a fairly good kid in school. Getting called into the principal’s office was not a common occurrence for me as a child, but the few times when I did have to face the music of authority and discipline left an indelible mark. After my child came out as transgender more than five years ago, my fear of a call from the principal was about way more than afterschool detention.

Related: Out country star Brandi Carlile’s daughter couldn’t do project about her family in Florida

Over the phone, Ms. Z said she’d like to meet to discuss some things my child had disclosed at school “just to get ahead of any potential problems in the future.”

I knew this wasn’t about academic success or passing notes in class. I couldn’t shake the chill that settled in my gut as I drove to the school.

I checked into the front office with the admin assistant and was greeted by Ms. Z., who led me to a boardroom across the hall. The French teacher and the Child Development Advisor joined us. Like the rest of the public school, the room was a throwback to the 1960s with updated neon overhead lighting and bare dingy greenish-grey walls. The boardroom table was an assembly of four separate tables, all about half an inch in height variance from the other. The office chairs we sat in were too low and leaned back too far, amplifying my sense of being small and unstable.

The formalities out of the way, Ms. Z started with pointed questions about rumors that my child was taking testosterone. I felt that I was being accused of either not knowing that my eleven-year-old was injecting drugs behind my back or that I didn’t think it was relevant to inform the school that I was performing Frankenstein experiments with my child.

I quickly reassured them that my fifth grader was not taking testosterone, he merely asked them to use male pronouns, but that we had started to see a psychologist who specialized in transgender issues. I positioned having a therapist as some sort of insurance policy against being judged as an unfit mother. They couldn’t accuse me of neglect as long as I was working towards a solution for the welfare of my child, right?

The conversation continued, and the questions were many. Were they curious or testing me to see if I was making this stuff up? Finally, I conceded we were quite new to this and were far from ready for medical interventions.

“There won’t be any testosterone anytime soon,” I assured them.

The relief that washed over the principal’s face couldn’t be mistaken.

On my drive home, I couldn’t help but wonder if I was throwing my child under the bus in order to appease the principal, to appear as her version of a good mother doing the right thing. For the next six months, I jumped through all the hoops put in place by the school to avoid getting a call from child protective services. I didn’t defend my trans son’s right to explore his gender identity without being labeled as mentally ill out of pure fear. Instead, I followed orders and got the psychiatric diagnosis of generalized anxiety the principal asked for so that she could justify the staffing needs to protect him from discrimination by transphobic students.

Over time, as my transgender son was more insistent, persistent, and consistent with his gender identity, I understood that my fear of authorities was getting in the way of his best life. So, we switched his school and took on the role of champion advocates for his rights as a trans child.

Although we have a happier ending today compared to how my son’s coming out at school began, the reality is that things could have been much worse had the proposed laws around affirming transgender children existed. My son’s then-principal assumed that transgender children were taking testosterone at eleven years old, and many of those opposed to the mere existence of transgender children think that they are undergoing surgical procedures too. As voters, lawmakers, principals, and parents, we all need to educate ourselves on what transgender truly means—especially for trans children.

Transgender children, like all trans people, don’t identify with the gender they were assigned when they were born. That’s it. It doesn’t mean they are switching genders; sometimes, they are non-binary. It also doesn’t mean they are having any physical interventions. Most of the time, children only transition socially, meaning they change their clothes, how they style their hair and the name or pronouns they use. Finally, none of this has to do with sexuality. Yet so much of the narrative from people opposing trans children has to do with sexualizing minors and being concerned about their reproductive life as if that is the only purpose of being human.

The false beliefs that trans children are being mutilated and having irreversible damage inflicted on them maligns parents who affirm their kids and, in many cases, save their lives. Parents of transgender children have so much to consider in our daily lives in order to support our children in their health and happiness. The last thing we need is to be the target of investigations and persecutions. In the end, it is our trans children who suffer.

Gay bars are on the decline nationwide according to new study