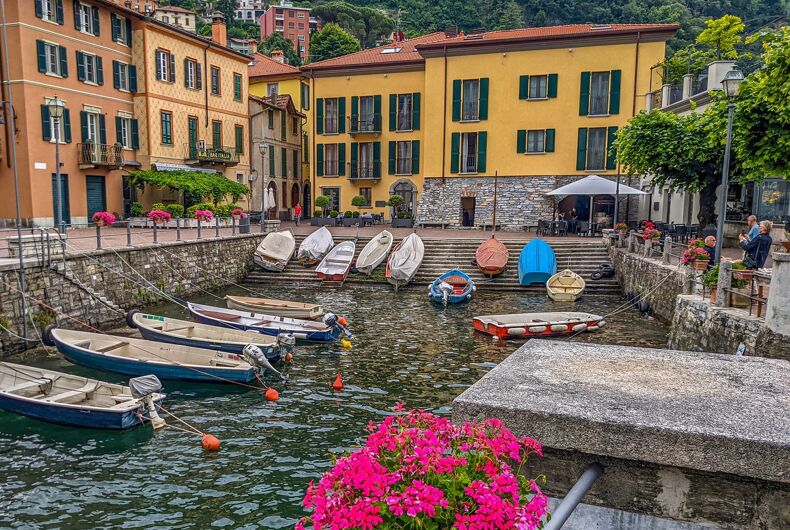 We hadn’t planned on living on Lake Como in Northern Italy.

Then again, a lot of our nomad destinations aren’t “planned” exactly: we always do our due diligence, but we also often make semi-impulsive decisions based on invitations from old travel friends.

In this case, our old friend George Clooney generously invited us to spend a month with him and his wife Amal in their $100 million villa in Laglio on Lake Como.

We actually came to Como to meet up with our friend Javier, someone we’d met on our very first nomad stop, in Miami, back in 2018. He and his girlfriend Missy had come to Lake Como to continue their efforts to become licensed floatplane pilots — and the lake was somewhere they could specialize specifically in floatplanes.

We expected Lake Como would be beautiful. And we knew that, yes, it’s home to George Clooney and other rich celebrities.

In fact, we assumed the entire area was an enclave for the rich — a sort of Italian Aspen, or maybe like Monaco, that glitzy, casino-decked city-state on the Mediterranean near the border between Italy and France.

It turns out we were wrong, mostly in ways that delighted us.

Como Isn’t Just an Enclave for the Rich

No offense to people who love Aspen and Monaco, but places like that just aren’t our beat. For one thing, as nomads, we both only own a single pair of shoes — tennis shoes, at that.

But Lake Como, especially the city of Como, isn’t nearly as posh as we expected.

To be clear: the area is fairly expensive by Italian standards (though not “Capri” or “Positano” expensive). It’s also very touristy, especially the deeper into the summer high season you go.

And, yes, if you’re looking for upscale boutiques — your Dolce & Gabbanas, your Armanis — you’ll definitely find them.

Meanwhile, Bellagio, one of the towns farther up the lake, is definitely an enclave for the rich — which is why that Las Vegas casino was named after it. But even Bellagio was a lot smaller than we expected.

In fact, unlike Aspen (which has become far too expensive for even its workers to live there), Como is filled with plenty of local Italians living regular Italian lives. We saw lots of pensioners, school kids, and a surprising number of immigrants from Africa and Southeast Asia, which gives the city a welcome amount of racial diversity.

As a result, cheap food options abound, and the city has public markets that many tourists ignore, all filled with affordable — and extremely fresh — meat, cheese, and produce.

Rich tourists can wear out their Platinum Visas. As for us, we loved the sprawling pop-up markets that frequently rise right outside the city walls of Old Town.

It’s Even More Beautiful Than They Say

Look, we’ve all heard how beautiful Lake Como is. It is frequently cited as the most beautiful lake in the world.

Somehow it managed to exceed even our very high expectations.

Lake Como is situated at the base of the Alps, in the shape of an inverted “Y.” From the top to the longer of its lower two branches, it’s about forty-seven kilometers long.

It was created by glaciers, which scraped deep gouges in the earth and created steep, sheer mountains on either side. As a result, the lake is the deepest in Europe outside of Norway: 400 meters to the bottom in some places.

The waters are now a deep azure blue, and the steep hills are densely wooded in vibrant green. A series of picturesque Italian villages dot the shoreline at regular intervals.

Simply put, this all repeatedly and regularly took our breath away.

We both love our hometown of Seattle, Washington, but the city has gone through three decades of explosive, insane, off-the-charts growth.

These days, there’s still natural beauty — but you only see it if you can somehow ignore all the strip malls, congestion-clogged freeways, and endless urban sprawl.

No doubt older Italians decry how modern-day Lake Como isn’t like the Lake Como of yore, but to our eyes, it still looked incredibly charming and authentically Italian.

Riding the ferry up the lake, we passed village after village, each one more idyllic than the last. Red clay roof tiles topped pastel-colored buildings.

Meanwhile, when we stopped to explore these villages in turn, we found each one more delightful than the last: cozy little harbors that led to winding stone stairways that rose up to shaded parks with moss-covered sculptures and bubbling fountains.

At the risk of sounding like elitist snobs, we also appreciated that the lake isn’t overrun by jet-skis and motorboats, and that the area isn’t marred by sprawling resorts and towering condominiums.

Instead, everything fits seamlessly together. For the most part, the modern highways are tucked away behind hills and in tunnels, and the towns and their buildings gently follow the contours of the land. The architecture is old-fashioned and consistent.

Perhaps our favorite towns were the ones perched high up in the hills, sparking our imagination as to why anyone decided to build that high up in the first place — and how, to this day, they regularly manage the incredibly steep climbs.

The Ferries Are Great

Lake Como is surrounded by roads, one along the shore and a more modern highway higher up in the hills.

But the way to really see the lake is on one of the many ferries that plow up and down its narrow length.

There are two options: high-speed hydrofoils, and the battelli, which are a kind of local ferry.

In fact, the hydrofoils aren’t that fast — only cutting a little over a half-hour off the hour-and-forty minute trip from Como to Bellagio. They’re also enclosed, which means your view of the lake is limited, and they require a small surcharge.

Our recommendation? Take the high-speed ferry one direction and catch the battelli on your way home, which affords you a much better look at the glory of the lake and its many villages.

But Lake Como is Unprepared for our Age of Over-Tourism

Look, we love Italy. And we’re really glad that Lake Como still seems authentically Italian and has maintained so much of its old-world charm.

But the downside to this is that they’re not really prepared for the hordes of tourists that descend in our current Age of Over-Tourism.

Those ferries we loved so much? It’s impossible to buy tickets via machine, and online purchases are limited, and there are only (at most) three open ticket windows at the ferry terminal in Como.

That means long lines almost all hours of the day, even in the less crowded shoulder seasons. And the ferries fill up in the high season, meaning you may have to wait a ferry or two to get home.

Meanwhile, the complicated ferry schedule is virtually unreadable to non-Italian eyes (save time and just ask any available agent how to get where you’re going).

The lines can be even worse at Como’s famous funicular that rises up to the oh-so-charming village of Brunate, which is required visiting if only for the incredible view of the lake.

The funicular was built in 1894, and frankly, it seems like it accommodates about the same small number of people that it carried back then.

On one hand, Lake Como seems quaint and bucolic — a world apart from the bustle of the modern world.

On the other hand, it’s a short, forty-five-minute train ride from Como to Milan, the second-largest city in Italy.

And what a city!

Milan was, of course, one of the centers of the Renaissance, and is home to Leonardo da Vinci’s famous “The Last Supper,” which was painted directly on the wall of the refectory of Santa Maria della Grazie church.

The city’s centerpiece is its famous Duomo — figuratively and literally: all roads spread out from or circle around the church. It’s known for its Gothic, spired roof and its overwhelming number of statuary: some 3,400 statues, 135 gargoyles, and 700 other miscellaneous figures.

Also, when in Milan, don’t miss the marvelous Monumental Cemetery, which is home to an absolutely astounding variety of crypts, tombs, and ossuaries.

And Switzerland Is Right Next Door Too!

Lake Como is so close to Switzerland that your cellphone may frequently tell you that you’ve entered that country even when you haven’t crossed the border.

From Como, the Swiss town of Lugano is a very easy forty-five minutes by train — only two short stops away.

And it is definitely worth visiting.

The highlight may be Lugano’s two-part funicular that carries visitors to the top of nearby Mount Salvatore. Once at the top, the view of Lake Lugano below, is, well, see for yourself:

But one thing to keep in mind: Italy is one of Western Europe’s more “affordable” countries, and Switzerland is one of its most expensive.

Practically speaking, that means prices for food, lodging, and everything else will at least double once you cross the border.

We’ve long said, “The closer you get to a major tourist attraction, the worse the food is going to be.” After all, if restaurants are catering mostly to tourists, they don’t have to worry about repeat customers.

Lake Como is definitely a major tourist attraction, but we still found the food to range from Very Good to Excellent.

And the gelato? It was consistently great.

Then again, maybe “surprisingly good food” is true of all of Italy. Italians seem to take real pride in their cooking.

Brent Hartinger is a screenwriter and author, and Michael Jensen is a novelist and together they write Brent and Michael Are Going Places, a couple of traveling gay digital nomads. Subscribe to their free travel newsletter here.

Today is our first Father’s Day. Here’s what we learned on our journey to adoption