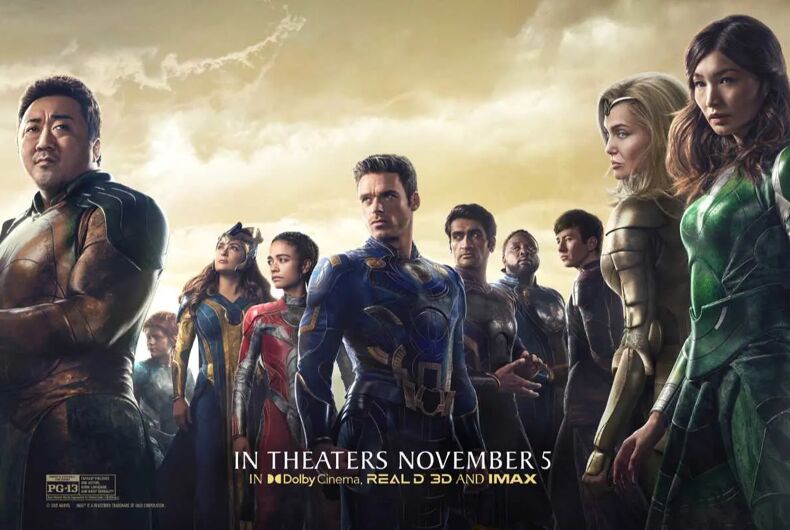 Have you ever noticed that the majority of our Western narratives have a single hero who, at some point, has to go off to fight the Big Bad on their own? Think about all of our big common stories–Star Wars, Harry Potter, even The Avengers–eventually, the hero winds up in a one-on-one battle with the bad guy, maybe with their friends watching from the sidelines.

This type of story is culturally significant, and it has played an integral role in the way Western culture evolved. But I think it’s time to move in a different direction as storytellers. Our narratives deeply impact the way we think about and move through the world. Through the lens of our media, we’re led to believe that we have to do everything on our own. If we can’t, these stories tell us, we’re some sort of failure or burden.

Related: “Eternals” inundated with hateful fake reviews because the movie has a gay superhero

This is completely untrue.

Humans are a social species. We evolved to support one another, build communities, and work toward the survival and betterment of mankind together. So why do our stories still focus so narrowly on this myth of the solo hero?

It’s definitely easier to tell a story if you have one character alone, I’ll say that. It’s easier to focus on a single character and disregard the patterns of community, kin, and climate they’re embedded in. But in the end, it doesn’t serve us.

We don’t need more heroes. We need more communities working together, sorting out interpersonal problems, and showing us that healthy ways of living and working together are out there. We need more stories that show us the connections between the people in them and everything around them. Because this myth of the Lone Hero Ruggedly Struggling? That kind of myth is killing us.

As an author and a member of marginalized communities, I do my best to work to shift the narrative. In my Aces High, Jokers Wild series, my characters showcase the radical acceptance and collaboration of many people across many genders, ethnicities, and personal histories. Some of my characters come from privileged backgrounds and use their advantages for good. Some of my characters are from marginalized backgrounds and are shown being supported and starting to reach their fullest potential as they thrive.

As each character comes into their own, they make their unit—called the Wildcards—that much more successful. As the group gains more ground, they can do much more to help the overall cause they’re fighting for: the return of democracy to America. And that, on the highest level, is the story I  want to tell. But on a more intimate level, I’m telling a story of a family coming together and helping each other to be the best they can be.

The Wildcards are a bunch of misfits, and as an author I want to show these kinds of people finding acceptance, community, and a home that welcomes them as who they are. Since much of the audience for my work is from various marginalized backgrounds, I see this as a way to support my readers. I’m reminding them that, yes, they can find a place where they’ll belong and be supported. There is a community out there for them. I want them to know that. And that starts with telling stories focused on groups instead of singular hero figures.

When it comes down to it, we’re all heroes in our own ways. Isn’t it time our stories reflected that?

O. E. Tearmann lives in Colorado with two cats, their partner, and the belief that individuals can make humanity better through small actions. They are a member of Rocky Mountain Fiction Writers, the Colorado Resistance Writers and the Queer Scifi group. In their spare time, they teach workshops about writing GLTBQ characters, speak and plant gardens to encourage sustainable agricultural practices, and play too many video games.

What is the asexual pride flag?