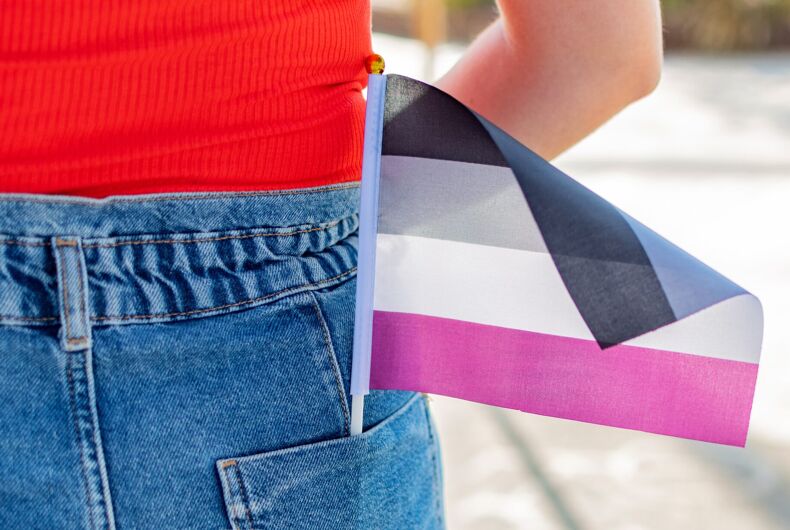 “Ace” is short for “asexual”, a type of sexual orientation that’s defined by the Human Rights Campaign as a “complete or partial lack of sexual attraction or lack of interest in sexual activity with others”. Here, we take a look at the history and meaning behind one of the most important symbols for the ace community: the ace pride flag.

What Does It Mean To Be Asexual?

According to Asexual Visibility & Education Network (AVEN), asexual people are neither drawn to people sexually nor do they have a desire to act on their attraction to others sexually.

Asexual people are often misconstrued as celibate. However, celibate people voluntarily abstain from sex and usually do so for religious reasons. Asexual people, on the other hand, have an intrinsic lack of sexual attraction or desire for other people. This makes asexuality a sexual orientation much in the same way that being gay, lesbian, or bisexual is a sexual orientation.

With that being said, not everyone experiences asexuality the same way. The asexual community is incredibly diverse. Different people have different levels of attraction and desire as well as different wants and needs in a relationship.

Although asexual people have been around for centuries, the concept of asexuality wasn’t explored until the late 1890s. One breakthrough for the asexual community was the inclusion of a “Category X” on the Kinsey Scale – which describes people with “no socio-sexual contacts or reactions” – in the 1940s.

As asexuality is only now receiving attention from researchers, there are very few studies on it. Experts estimate that asexuals make up approximately 1% of the population.

There is no one definitive way to experience asexuality. In fact, it is a spectrum rather than a singular identity. The asexuality spectrum – often referred to as acespec or a-spec – ranges from asexual to allosexual, the latter of which is defined as “people who experience sexual attraction”.

Here are some of the identities that fall under the acespec:

Also known as “graysexual” or “gray ace”, gray-asexual describes the gray area between asexual and allosexual. People who identify as gray ace may experience some degree of sexual attraction but may not feel comfortable fully identifying as allosexual.

Gray ace may be used to describe people who:

Demisexual people must form an emotional bond with someone before they can be sexually attracted to them. For some, attraction works in two stages: primary and secondary attraction.

Your primary attraction to someone could be based on their smile, their laugh, their eyes, or your first impression of them. Meanwhile, secondary attraction is something that forms after you spend some time with that person and get to know them on a deeper level.

Also known as lithsexual, these are people who can experience sexual attraction to others but may lose that feeling of attraction once they know that their feelings are reciprocated. In a sense, akoisexuality is the opposite of reciprosexuality.

Before the creation of the asexual flag that we know today, the most widely used symbol for asexuality was the AVEN Triangle – an upside-down triangle with a black and white gradient and bordered by the color purple.

The purple accent, which was used in the overall design of the AVEN website, was said to have been chosen by AVEN’s creator after taking inspiration from a legend surrounding purple amethyst. The legend claims that placing purple amethyst in wine can keep someone from getting drunk. This legend was used to stand as a loose metaphor for asexuals’ lack of sexual desire.

Today, there is one flag that is widely accepted and used by the ace community. This ace flag was designed in 2010 by AVEN user “standup” after a month-long campaign to create a flag that accurately represents the ace community. The flag consists of four differently colored stripes, symbolizing the following:

Asexuality is a spectrum, and there are many different ways to experience it. The ace flag is designed to represent all of those experiences, and everyone who identifies with it should feel proud to wear it.

If you’re questioning your own sexuality or wondering if you might be asexual, we hope this article has provided some useful information for you!

Is it more difficult to be queer or have a hearing disability?