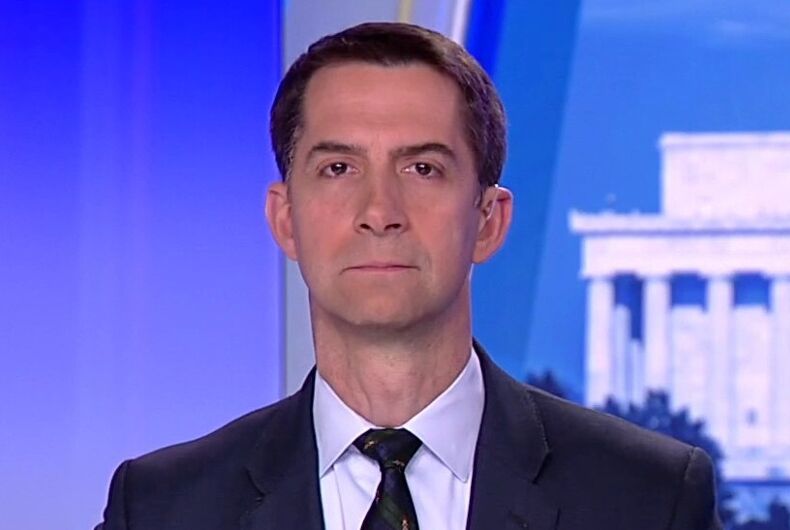 A group of Republican senators has introduced a bill that would deny federal funds to any gender-affirming medical care for transgender individuals. The bill would also allow anyone who received such care (and their parents) to sue the medical professionals who provided it. But the bill is based on a misleading and transphobic view of how gender-affirming care actually works.

The so-called “Protect Minors from Medical Malpractice Act of 2022” would give individuals who were given puberty blockers, hormone replacement therapy, and surgical procedures — and their parents — up to 30 years after the age of 18 to sue the medical professionals who administered the care.

The bill would also make it so that neither federal dollars nor federal laws could compel medical practitioners to offer such care.

In a deeply misleading statement, one of the bill’s sponsors, Sen. Tom Cotton (R-AR) wrote, “Gender-transition procedures aren’t safe or appropriate for children. Unfortunately, radical doctors in the United States perform dangerous, experimental, and even sterilizing gender-transition procedures on young kids, who cannot even provide informed consent. Our bill allows children who grow up to regret these procedures to sue for damages. Any doctor who performs these irresponsible procedures on kids should pay.”

Second, such care is neither “dangerous” nor “experimental.” Cisgender kids with rare cancers and other disorders have been given puberty blockers for decades with no damaging or long-term side effects. The other procedures mentioned have been used for many years with nary any reports of negative effects or regrets from its recipients.

Third, such procedures aren’t given without the “informed consent” of the children they’re provided to. Rather, such care is only approved of once medical and mental health professionals have found that a young person’s declaration of trans identity has been “insistent, persistent, and consistent.”

That is, a truly transgender child must repeatedly and continuously assert their trans identity over many years, not just a brief period, before professionals will render any kind of treatment. Medical professionals are also ethically required to discuss with children the sort of changes that gender-affirming care will have on their bodies over the long-term before rendering such treatment.

The true intent of this bill, other than misleading the public, is in its provision allowing the disapproving parents of trans children to sue doctors who provide their kids gender-affirming care.

As such, any parent upset with their child’s decision to transition could sue doctors for “scarring” their kids, even if the children themselves are happy with the care they received. This would essentially make it legally risky for medical professionals to render such care, something that will make them and medical institutions much less inclined to provide such care.

Additionally, the bill seeks to deny government funding for hospitals and professionals who render such care, making it much harder to fund such life-saving services.

The legislation was introduced by Republican Sens. Cotton, Josh Hawley (MO), Marco Rubio (FL), James Lankford (OK), and Steve Daines (MT). The bill follows a Republican narrative that children are being forced to transition against their will, a narrative that is blatantly untrue.

Cotton is no friend to progressive or trans causes. Cotton has said that he wants transgender women to be imprisoned with cisgender men even though it increases the women’s chances of being violently assaulted. He once called the lesbian president of the American Federation of Teachers “a joke” because she didn’t have kids (though she clapped back excellently).

He is also notoriously racist. He has been behind bills to defund anti-racist education in the military and public schools. He has called slavery a “necessary evil,” championed slaveholder and Native American slaughterer President Andrew Jackson as an American hero, and supports using the U.S. military to attack racial justice protesters.

CDC reports one of the worst meningitis outbreaks among gay & bisexual men in U.S. history