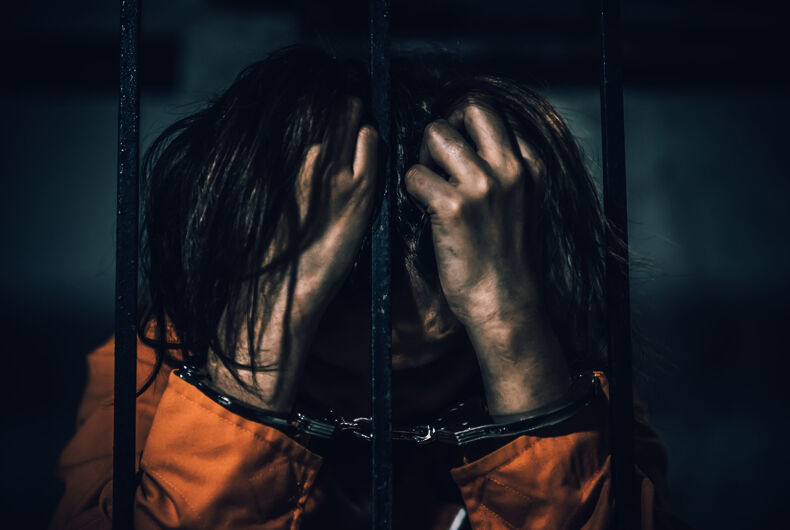 On Thursday, Sen. Tom Cotton (R-AR) introduced a bill that would require the Bureau of Prisons (BOP) to house trans federal inmates based on their sex assigned at birth rather than their gender, a policy that LGBTQ equality advocates say will put transgender people at risk of violence.

The bill would also incentivize state prisons to do the same by limiting funding to those who house inmates by their gender identity.

Cotton proposed the bill under the guise of protecting women from violence, even naming it the “Preventing Violence Against Female Inmates Act.”

The bill is a response to a report that leaked from the Department of Justice (DOJ) detailing a potential executive order from President Joe Biden that would mandate prisons house inmates according to gender.

“President Biden’s plan to house male and female prisoners together will put women in danger,” Cotton claimed in a press release that denigrated trans identities. The release cited unspecified anecdotes about violence against cis women but not any statistics on the alleged problem.

“Documented cases prove that placing men—including ones who ‘identify’ as female—in women’s prisons puts female inmates at increased risk of sexual assault. My bill will stop the president’s ill-conceived plan and keep men and women separated in federal prison.”

In reality, it is trans inmates who are at far greater risk of violence, especially trans women who are housed with men.

“Anyone concerned with violence against women should be worried about the staggering rate of sexual violence against transgender women in men’s prisons,” Gabriel Arkles, senior counsel at the Transgender Legal Defense and Education Fund, told Xtra.

As of now, federal policy surrounding the placement of trans inmates is murky.

When it comes to state prisons, the Prison Rape Elimination Act, a federal law, says state prisons must interview trans inmates every six months about where they would feel safest and account for these feelings when deciding where to house them.

There is, however, very little oversight to confirm this is happening, and it remains rare for a trans inmate to be housed in accordance with their gender identity.

A 2020 NBC News investigation found that almost all trans inmates are housed according to the sex they were assigned at birth. Of the 4,890 trans inmates in state prisons across 45 states at the time of the report, NBC News could only confirm 15 inmates who were housed based on their gender.

Trans advocates are worried that Cotton’s bill will even further endanger trans inmates.

“The Constitution protects the rights of incarcerated people including transgender people,” Lambda Legal senior attorney Richard Saenz said, “and the federal Bureau of Prisons and state prisons and jails systems have a duty to keep people in their custody safe.”

Cotton has long been known for his anti-LGBTQ voting record and has gotten a score of “0” on the Human Rights Campaign’s Congressional Scorecard for the past several years.