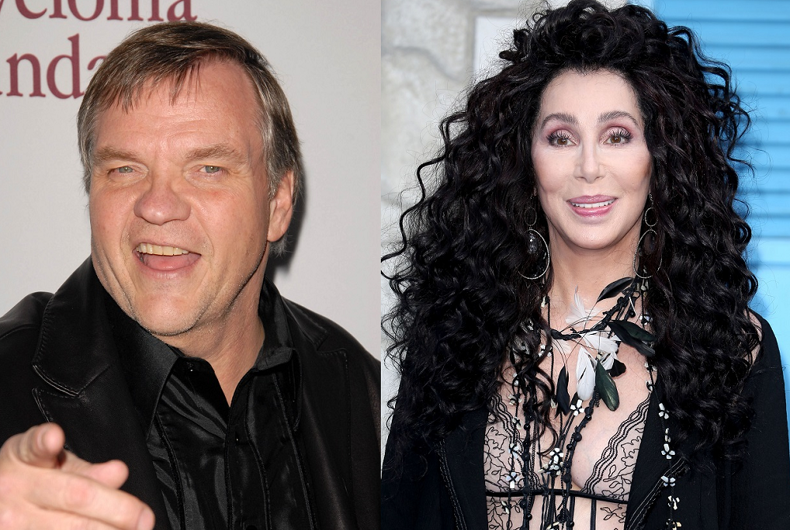 “Had So Much Fun With Meatloaf When We Did ‘Dead Ringer,'” the 75-year-old veteran of the entertainment industry wrote, referring to her and Meat Loaf’s 1981 hit duet “Dead Ringer for Love.”

“Am Very Sorry For His Family, Friends, & Fans. Am I imagining It, or Are Amazing Ppl In The Arts Dying every other Day⁉️”

Had So Much Fun With Meatloaf When We Did “Dead Ringer”. Am Very Sorry For His Family,Friends,& Fans. Am I imagining It, or Are Amazing Ppl In The Arts Dying every other Day⁉️
😢

Meat Loaf’s family posted on Facebook last night that he had passed away at age 74. They did not share the cause of death.

“Our hearts are broken to announce that the incomparable Meat Loaf passed away tonight with his wife Deborah by his side,” the message said.

Related: Cher explains why she has loved gay people since she was 9-years-old

“We know how much he meant to so many of you and we truly appreciate all of the love and support as we move through this time of grief in losing such an inspiring artist and beautiful man.”

“R.I.P Meatloaf,” said musician Boy George. “Love and prayers to all his family and close friends. He once turned me upside down in a Chinese Restaurant in St Johns Wood.”

Early in his career, Meat Loaf was cast in the roles of Eddie and Dr. Everett Scott in the stage production of The Rocky Horror Show. He played the role of Eddie in the queer cult classic The Rocky Horror Picture Show, released in 1975.

Two years later in 1977, he released his album Bat Out of Hell, which would sell over 43 million copies and become one of the best-selling albums of all time. “I’d Do Anything for Love (But I Won’t Do That),” a power ballad on the sequel album Bat Out of Hell II: Back Into Hell, earned him a Grammy for Best Rock Vocal Performance, Solo.

Later in life, Meat Loaf got involved in Republican politics. He supported Mitt Romney’s 2012 presidential bid and sang “America the Beautiful” at an Ohio campaign event.

He appeared on a season of Celebrity Apprentice in 2011 and befriended the Trump family.

“He’s intelligent,” Meat Loaf said in a 2017 Billboard interview, referring to Donald Trump. “He’s like me in the sense that he will hire the best people for the position that he can find. And he will then listen to them and I would say probably say 70 percent of the time he will go with their recommendation.”

Moments after she tweeted about Meat Loaf, Cher brought up actor Betty White, who passed away in December at age 99.

“I’m So Relieved & Happy,” Cher wrote, “That there Will Be A Program Where We Will Talk About Betty. My one fear is…. I may cry.”

I’m So Relieved & Happy
That there Will Be A Program Where We Will Talk About Betty. My one fear is…. I may cry😔

GOP Sen. Tom Cotton wants to force trans women to be locked up with violent men in prisons