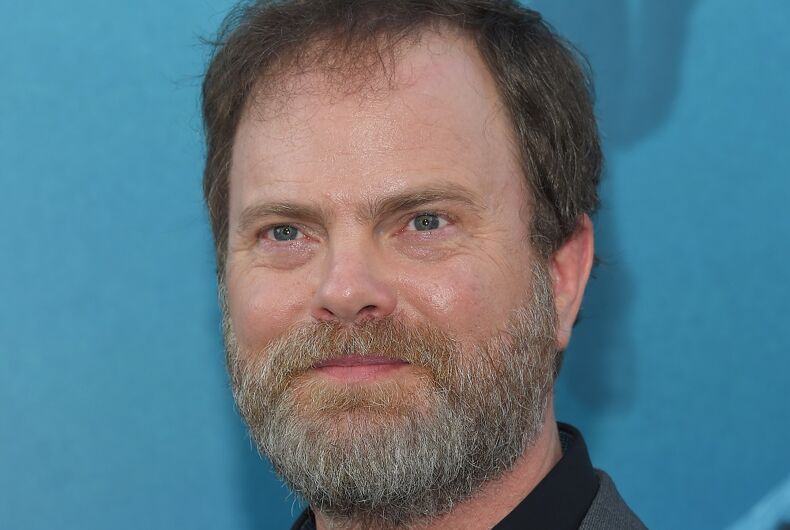 Actor Rainn Wilson, known for his portrayal of Dwight Schrute on The Office, has apologized for making a transphobic “mean crack” on social media.

“TIL you can no longer say ‘nursing or breastfeeding mother’ you have to say chest feeding person,” Wilson wrote earlier this week in a tweet that appears to have since been deleted.

Related: Disney won’t send 2000 high-paying jobs to Florida this year. Is it because of “Don’t Say Gay”?

Chestfeeding is a term used by some trans fathers and non-binary parents because the term breastfeeding can trigger dysphoria.

Wilson was referring to the online discussion of a 2021 statement from the U.K.’s Academy of Breastfeeding Medicine that recommends using the terms like chestfeeding, lactating, breastfeeding, and expressing depending on who a professional is talking to. The statement itself uses the terms breastfeed and chestfeed multiple times together and includes both of them on a list of “gender-inclusive terms.”

That hasn’t stopped the right from saying that the term “breastfeed” has been banned since the statement was released and even The Times of London was forced to issue a correction after it parroted the anti-trans misinformation.

“Yesterday I tweeted a mean crack about breastfeeding vs chestfeeding,” he wrote. “After speaking with some Trans friends and educating myself a bit more I want to apologize for the tweet. It was adding to misinformation and meanness. I’m sorry.”

Yesterday I tweeted a mean crack about breastfeeding vs chestfeeding. After speaking with some Trans friends and educating myself a bit more I want to apologize for the tweet. It was adding to misinformation and meanness. I’m sorry.

His fans had a mixed reaction. Many of them said that he shouldn’t have apologized and apparently didn’t understand that no one is actually advocating that the word “breastfeed” never be used. Others were glad that he was able to learn by listening to actual transgender people and admit that he was wrong.

As a trans person in the US right now, it feels like the we are on a slide towards mass criminalization and extermination that cannot be stopped, that cis people not only don't care but celebrate our suffering. It might seem silly, but tiny moments of hope like this help.

Don’t apologize for making a joke.

Thank you for educating yourself and doing better.

Perhaps you should talk with some actual nursing mothers and educate yourself about why the term “chestfeeding” is offensive and degrading to women. (Women, in case you are confused, are the humans who are able to breastfeed children).

Me too. I, as a post top surgery trans guy, don’t personally like chest feeding as a term (if it were applied to me), but it also will never apply to me, so I’m happy there’s more inclusive language that is making parenthood more inclusive and accessible.

Trans people are constantly under attack from the right wing, and not enough people are standing up for them. A good comedian should be able to be funny without hurting people who are already vulnerable.