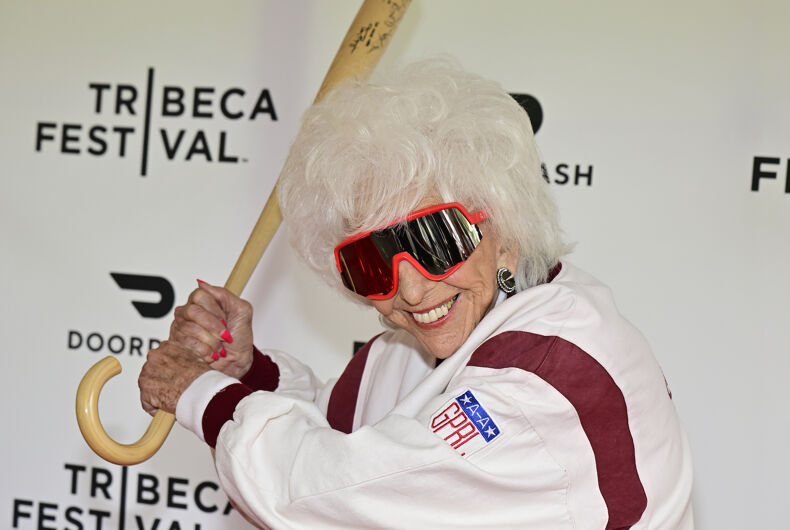 Maybelle Blair attends the premiere of "A League Of Their Own" during the 2022 Tribeca Festival at SVA Theater on June 13, 2022 in New York City.Photo: Jeff Neira/Prime Video

Maybelle Blair, who inspired the character played by Madonna in Penny Marshall’s 1992 comedy A League of Their Own, has come out as gay. The 95-year-old made the announcement at the Tribeca Festival premiere of Amazon’s new series based on the film.

Speaking about the new, more inclusive version of the story of the All-American Girls Professional Baseball League, Blair said, “I think it’s a great opportunity for these young girl ball players to come realize that they’re not alone, and you don’t have to hide.”

Related: Baseball players remove Pride logos from uniforms because “we believe in Jesus”

“I hid for 75, 85 years, and this is actually basically the first time I’ve ever come out.”

Both the show’s and Amazon Studios’ official Instagram posted a video from the Tribeca event, with a note celebrating Blair’s announcement.

“For the majority of her life, sports legend 95-year old AAGPBL player, Maybelle Blair felt like she had to hide her authentic self,” the caption reads. “Today she came out publicly for the first time. We couldn’t be happier for her, and continue to push for love, acceptance, and education on and off the field.”

A post shared by A League of Their Own (@leagueonprime)

Unlike the 1992 film, the new series, co-created by Will Graham and Abbi Jacobson, centers on queer and trans characters, and features the stories of the Black players who weren’t allowed into the AAGPBL. Jacobson (Broad City) stars as Carson Shaw, a player who develops a romantic relationship with teammate Greta (D’Arcy Carden of The Good Place and Barry).

Blair, who earned the nickname “All the Way Mae” during her time with the Peoria Redwings in the late 1940s, recalled realizing she was attracted to women as a teenager.

“I thought, oh my gosh, Maybelle, what’s wrong with you? Because I had a crush on this girl in high school and finally, we sort of had a little thing, you know how you do,” she said. “It was really bad because in our day you wouldn’t dare tell your family or hint to anybody that you were gay it was the most terrible thing in the world.”

But, joining the AAGPBL changed her life, Blair said. “I went back to Chicago, and I got on the team, and I’ll tell ya, it was the most amazing time of my life because they asked me to go out to a bar,” she recalled. “Well, it turned out to be a gay bar, and I was never so happy in my life.”