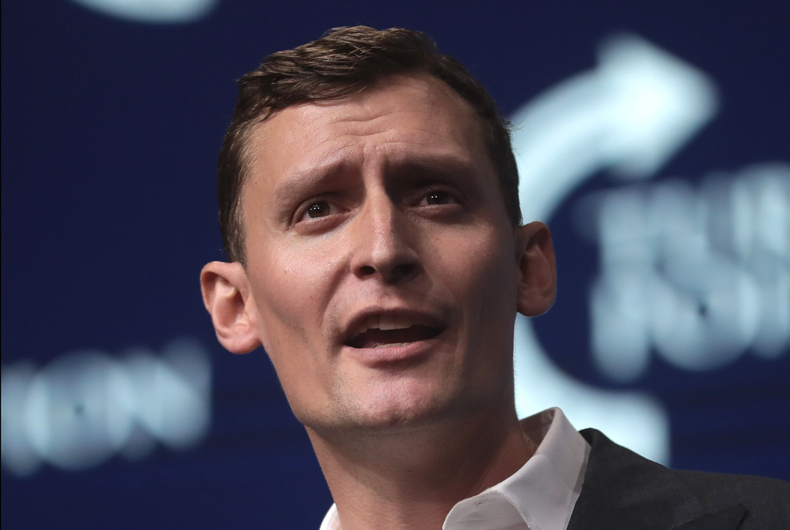 Thiel Foundation President Blake Masters, who is a Republican candidate for a U.S. Senate seat from Arizona, may have backing from a gay billionaire, but he went on a tirade about marriage equality earlier this year.

“It’s not just Disney, you know, ‘follow your heart,’” he said at a February event. “It has a point.”

The “point” of marriage, according to Masters, 35, is to have children, and therefore marriage for same-sex couples has no point.

“Marriage is an institution that goes back thousands of years, and it has a point. The point is procreation and creating children,” he said.

“The Supreme Court should not be deciding gay marriage,” he said, referring to the 2015 Obergefell v. Hodges decision that legalized marriage equality in all 50 states.

“If this country wanted to legalize gay marriage or recognize it, what you would do is you would have a constitutional amendment. It’s supposed to be hard. It’s supposed to be hard for a reason,” he continued. “Frankly, the Supreme Court just squinting and making up so-called rights in the Constitution – the right to privacy that was for abortion, the right to gay marriage – I disagree with that.”

Masters even brought up out gay billionaire Peter Thiel, who he called his “former boss and mentor,” and said that even Thiel’s marriage should be invalidated.

“I went to his wedding like, you know, I’m… it was great, I wish him well. I don’t think the Supreme Court should have decided that case that way,” he said. “Marriage is between a man and a woman.”

Masters said that marriage equality wasn’t “the live issue right now” at the time, but just several months later it is. The Supreme Court overturned Roe v. Wade this past Friday with a decision that attacked the very notion of substantive due process, the constitutional doctrine underpinning Obergefell and Lawrence v. Texas, the 2003 decision that ended sodomy laws in the U.S.

Supreme Court Justice Clarence Thomas wrote in a concurring opinion that marriage equality should be reconsidered in light of Roe being overturned.

“We should reconsider all of this Court’s substantive due process precedents,” Thomas wrote. “We have a duty to ‘correct the error’ established in those precedents.”

Masters is currently polling ahead of all other candidates in the Republican primary for the U.S. Senate seat. The primary is scheduled for August 2, and if he wins he will face Sen. Mike Kelly (D-AZ) in the general election in November.

Thiel, a conservative and wealthy supporter of rightwing candidates, married his partner Matt Danzeisen in 2017.

Vandal arrested for spray-painting Target’s Pride display. He could get locked up for years.