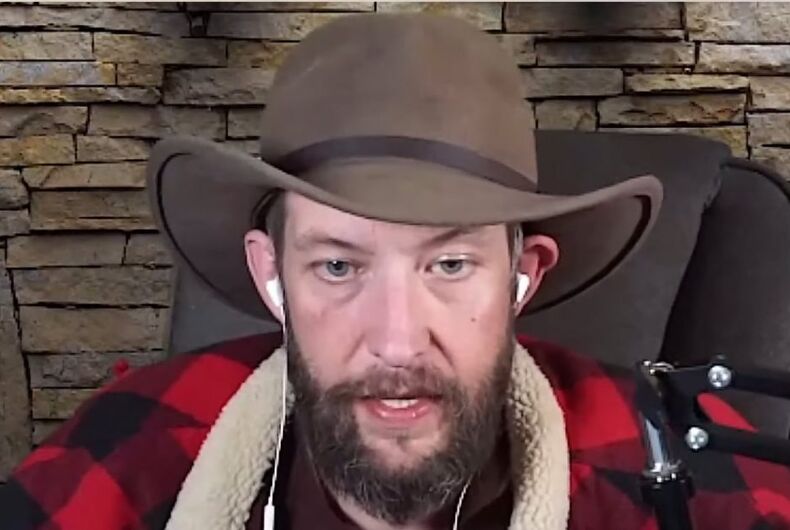 A conservative pastor has declared bankruptcy and admitted that he is a liar after a transgender activist sued him for claiming that she had harassed a Montana state senator and made the senator fear for his safety.

The pastor, J.D. Hall, recently admitted that he lied when he wrote on his website, The Montana Daily Gazette, that Native American transgender lobbyist Adrian Jawort had harassed state Sen. Butch Gillespie (R) in the state capitol building. Jawort’s alleged harassment and threats had made Gillespie so fearful, Hall wrote, that he asked the capitol’s sergeant-at-arms for additional protection.

Hall wrote this in a May 3, 2021 article entitled, “Who’s the Gothic Transvestite Haunting the Halls of the Montana Capitol?” The article repeatedly misgendered Jawort, mocked her “mannish” appearance and makeup, and said her trans identity is proof that she’s mentally ill.

In response to his article, Jawort sued Hall for libel. The two reached a pending legal settlement that requires Hall to pay $250,000 to Jawort. Additionally, Hall must also issue an apology to Jawort and retract his article. He must post them in a “prominent place” on his website for seven days. The statement must permanently remain on the website afterward as well.

Hall has filed for bankruptcy, meaning that Jawort may never see a penny of the settlement. However, she told the Great Falls Tribune that she’s happy about the legal outcome nonetheless.

“I am grateful that after a tumultuous year, Pastor Jordan Hall was finally able to admit committing libel and bearing false witness against me,” Jawort said. “In this day and age when trans people like myself are targeted with political bullseyes on our backs, it was especially dangerous of him to falsely accuse me of bullying and harassing an elderly state Senator I’d never met to the point where the sergeant at arms had to pull me away.”

“There are people out there who’d physically hurt me if they thought that was true and then saw me to take revenge,” Jawort added. “Hall must realize as a pastor people will take his word as literal gospel and act on it.”

In an affidavit, Gillespie wrote that a person had once confronted and yelled at him in the capitol building, but he didn’t identify the person. Jawort said she wasn’t sure if the confrontation that Hall described had actually ever occurred, was a case of mistaken identity by Gillespie, or if the story was just made up to silence her and other LGBTQ and Native American political advocates.

Hall was arrested two weeks ago on charges of driving under the influence and illegally carrying a concealed weapon. He pleaded not guilty, claiming he suffered from a “vitamin deficiency.” He submitted his resignation to the Fellowship Baptist Church where he serves as a pastor. The church declined his resignation but put him on a three-month leave of absence, saying he could only return if his wife permits it.