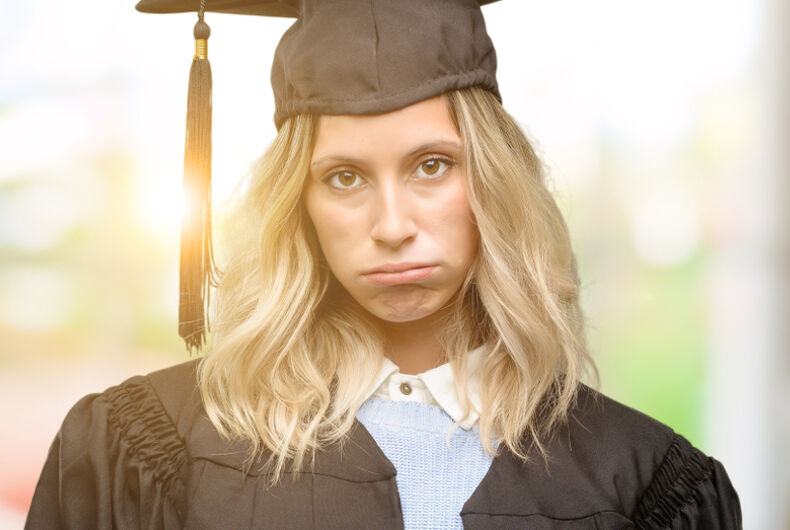 Students and faculty were left feeling unwelcome and attacked during the River Valley High School graduation ceremony in Marion, Ohio after the commencement speaker made anti-gay remarks during his speech.

Jim McGuire, a local businessman who owns J.L. McGuire and Associates, told students that they should follow “Biblical principles” and condemned same-sex marriages during his time at the podium.

Related: A school banned the rainbow flag from being flown. Students & teachers had the best response.

The rambling and odd speech started off badly when he told students that Jesus Christ established the modern calendar “and we need to remember that.”

“It is currently some people’s thoughts to be in vogue to diminish or play down biblical principles,” he added, before encouraging graduates to “choose a spouse.”

“I also strongly suggest to make sure to choose biblical principles, you know, a male with a female and female with a male.”

McGuire wrapped up by telling the audience about the time he went to Applebee’s and a “very helpful skeleton” sat down beside him and ordered “a beer and a mop.” That led into his recounting of the time he terrorized three toddlers as an April Fools joke.

“As with all alumni speeches in past ceremonies, the speech was not reviewed by anyone on the RV Administrative team or Board of Education,” the school system said in a message sent to parents after the ceremony concluded. “Any views expressed by the speaker during his commencement speech reflected his personal beliefs. He was not speaking as an official representative of River Valley Local Schools.”

“In cooperation with the River Valley Board of Education, the River Valley Administrative team will be reviewing our processes for future ceremonies. Above all else, we want to ensure our students, families, and guests receive a high-quality program focusing on the accomplishments of our graduating class.”

Alexis Osipow, a 2018 graduate who attended the ceremony to celebrate her sister’s graduation, said the speech was disrespectful to the LGBTQ students in attendance.

“When he made the comment that marriage should only be between a man and a woman, my jaw dropped to the floor, and I honestly thought I was hearing it wrong,” Osipow told the Marion Star.

“I had to look around and see if other people were having the same reaction that I was, and they were. I felt like crying when I heard some people in the crowd clapping. But I was absolutely outraged and so were my parents and brother. I heard people behind me whispering about how inappropriate the comment was as well.”

McGuire is a member of the Marion County Board of Developmental Disabilities. The board said it will review the remarks and decide whether to remove him from his position.

“While we did not attend the ceremony, our mission is that of inclusion of all people. We are learning the facts of this incident and will be meeting with the county commissioners to discuss his appointed position as a board member,” the board posted on Facebook after the uproar.