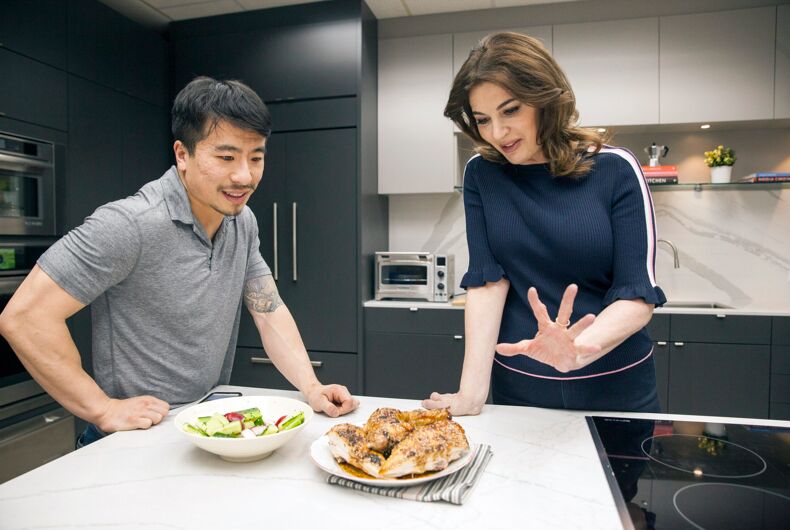 A few years ago, I started making post-Pride resolutions. I don’t suppose it’s a particularly original insight, but I’ve come to think of Pride as the culmination of the LGBTQ calendar—kind of like New Year’s Eve. So, the Monday after the parades and the marches and all the parties, I like to think about the work ahead, the opportunities for self-improvement and better engagement in the fight for LGBTQ rights and social justice broadly.

Of course, being heinously shallow and slightly brain damaged by the sight of so, so many shirtless dudes with perfect bods basically everywhere for the entire month of June, my Pride resolutions also tend to have a regrettable element of…body image nonsense. Get fit; do exercising; eat better. That sort of thing.

Unsurprisingly, I fare about as well sticking to Pride resolutions as I’m sure most people do sticking to the New Year’s variety. The resistance bands I bought last year hang limply in my closet, the yoga mat continues to accumulate dust. I’ll bookmark links to 7-minute workouts which I’ll somehow never manage to wedge into my extremely terribly busy schedule. Which is fine. I’m perfectly happy to get over the shallowness and body dysmorphic brain damage rather than significantly alter this poor beloved carcass of mine.

What I can manage to muster some enthusiasm for is a little dietary improvement. Not so much restraint. Not a diet, per se. Diet culture is, of course, toxic, and frankly, after a Pride weekend of late nights and too many cocktails and whatever else anyone may or may not have gotten up to, who needs more toxins? This isn’t about weight-loss or anything like that. It’s about feeling better, rebalancing the system after a period of indulgence.

I guess you could call it a detox—although, not being any sort of dietician or doctor, I do have the sense that detoxing isn’t really…a real thing. But that’s the feeling I’m going for. After all the celebratory drinks and subsequent morning-after catatonically ordered greasy take-out, I want to put food into my body that feels fresh and, for lack of a better word, pure.

When I’m in this reset mode, I invariably turn to the “Templefood” chapter of Nigella Lawson’s 2002 book Nigella Bites. (You know those Twitter threads that are like, “Tell me you’re gay without telling me you’re gay?” My contribution is: “The only cookbooks I own are by Nigella.”) There’s also a whole episode of her 1999 TV show devoted to the topic, which I’ll say is particularly helpful if you need motivation to get into the kitchen.

Templefood, Lawson writes in her introduction, is “my term for the soothing, pure, would-be restorative food I make for myself after one binge or late night too many. ‘Temple’ as in ‘my body is a…’” I’m pretty sure this applies to, say, several consecutive weekends’ worth of binges and late-nights-too-many as well.

I mean, I’m sure there are lunatics out there who can snap into disciplined, ascetic self-denial when they need to, but that’s not me, and you’ll find no prescriptions for existing on lemon water and cayenne alone here. The chapter is full of salads and surprisingly hearty meals that involve fish and fresh herbs and lime juice, none of which make you feel deprived. I’m particularly fond of her Vietnamese chicken and mint salad, which is like a fresh, sprightly take on coleslaw. I will wolf down the entire two-person serving when I feel like my insides need to be scoured with fiber and citric acid—very useful after eating nothing but late-night pizza hastily grabbed on the way home from the bar for days on end.

With the caveat, again, that I know next to nothing about nutrition, I am vaguely aware that things like omega fatty acids and fish oil and antioxidants are what you need, well, all the time, but particularly when you’re feeling depleted. And let’s be honest, plenty of us feel depleted both physically and mentally after Pride. If that’s the case, I’d recommend delving further into the Nigella oeuvre: she has a super easy poached salmon which I like over a salad of spinach and avocado dressed with a raw apple cider vinegar dressing. And it may seem bonkers to look to her Christmas book in the height of summer, but her antioxidant fruit salad—which is just pomegranates, blueberries, and mango spritzed with lime juice—works as well post-Pride as it does on New Year’s Day.

Look, I fully understand that the prospect of cooking and prepping meals—not to mention the clean-up after—is daunting when all you want to do is lie on the couch and binge Heartstopper until Labor Day. But I know Lawson would agree with me when I say that there is something restorative in the cooking itself. You know that feeling you get when you eat take-out, no matter how healthy, and you feel…stuffed but not nourished? I feel strongly that that doesn’t happen when you cook for yourself—whatever you cook. Not to get all woo woo or anything, but the act itself can be meditative. It’s literally self-care! And good god, we could all use a bit of that after all the fun we’ve just put ourselves through!

Pride In Pictures: In honor of Mark