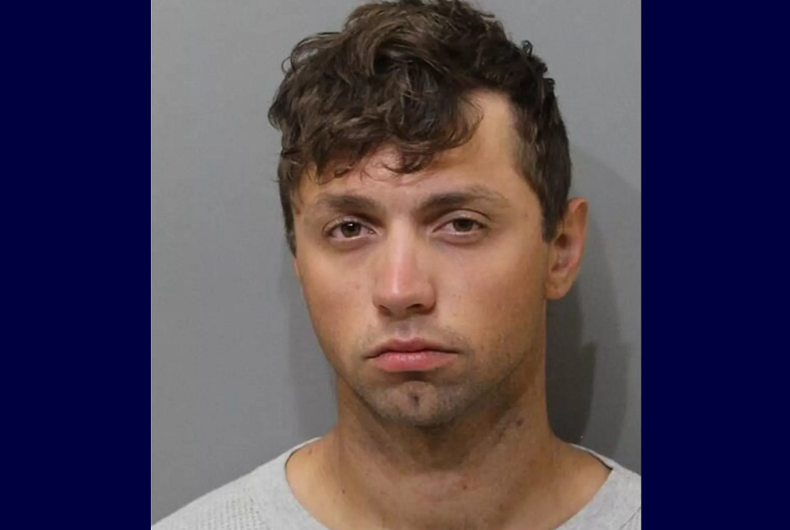 Thirty-one members of the white nationalist organization Patriot Front were arrested as they were allegedly on their way to riot at a Pride event in Idaho, some carrying firearms.

And one of them just got kicked out of his mother’s house.

Karen Amsden, the mother of Utah resident Jared Michael Boyce, 27, said that her son has been struggling ever since his father came out as gay and they got divorced.

She told The Daily Beast that after her son got out of jail in Idaho she told him, “Well, then you can’t live here. You can choose between Patriot Front and your family.”

“And he’s like, ‘Well, I can’t quit Patriot Front,’” Amsden recounted. “I’m like, ‘Well, then you’ve just chosen. So pack your stuff and get out of my house.’”

This past Saturday, 31 young men associated with the far-right organization traveled to Coeur d’Alene, Idaho to disrupt a Pride event. Police said that they had prepared an “operations plan” and had riot gear and smoke grenades.

“Officers believed it likely the intent of these individuals was to incite physical confrontation and cause disorder,” the Coeur d’Alene Police Department said in a statement. “All 31 were arrested for conspiracy to riot.”

Boyce, 27, was one of those 31 who got reported to police by someone who called them a “little army.” His Twitter bio calls him an “Alpha Chad” and “Patriot through and fucking through,” and he uses the handle @PedosnJooshang (“pedos and Jews hang”).

A social worker, Amsden said that she’s been trying to get her son to cut ties with the far-right group since before he was arrested in Idaho. But she hasn’t been able to convince him to leave Patriot Front.

“I would love to do whatever I can to out him [as a Patriot Front member] so that he can’t be a part of it,” she said, explaining why she’s talking to the media now. “And that they don’t want him to be a part of their group because his mom has loose lips and a big mouth and he’s never going to get away with anything.”

She said that her son told her that he was just going to Idaho to go camping for the weekend, and she said she had no idea that he was part of the “little army” going to wreak havoc on Pride.

“And I saw this news story come up that said 31 members of a white supremacist group were were arrested at a rally, and I just knew – I knew he was part of it,” Amsden said.

She said that her son told her, “Don’t believe the media, mom. We were just there because they’re grooming kids,” echoing language that rightwing politicians like Reps. Marjorie Taylor Greene (R-GA) and Lauren Boebert (R-CO) and Florida Gov. Ron DeSantis (R) have been using for months to vilify LGBTQ people.

“He’s so misguided and bought into all their rhetoric,” she said. “It just makes me sick.”

“This is not who I raised. This is not the example that was set for him.”