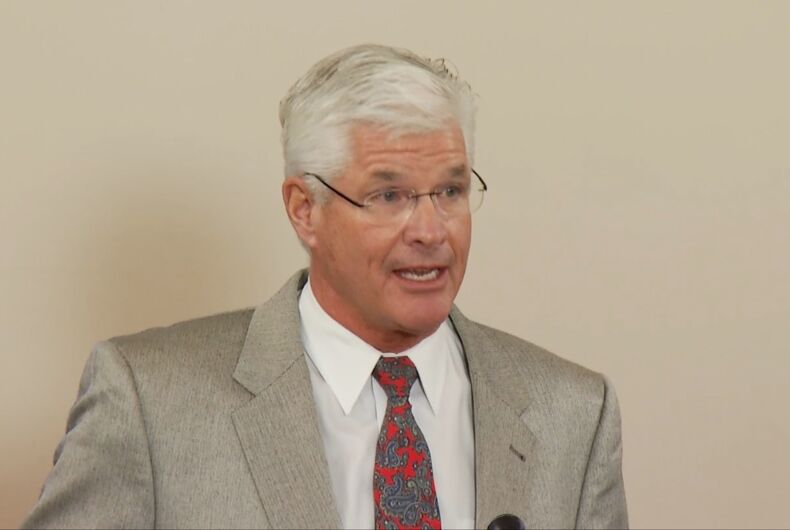 Michigan state Republicans have rejected a congressional resolution recognizing June as Pride Month in the state, even though they passed an identical resolution last year.

State Senate Majority Leader Mike Shirkey (R) referred the resolution back to his Government Operations Committee in order to make it “more reflective of the diversity of opinions in the Senate,” his spokesperson said.

Shirkey suggested removing references to the LGBTQ community and its struggles, adding a note that the state legislature values “all” Michigan residents as well as including a statement that “not every citizen in Michigan agrees with the lifestyle of the LGBT community” — implying that LGBTQ identity is a choice.

The original resolution noted that Pride began with Black trans woman Marsha P. Johnson and other trans and queer people risking “their lives to protest the over-policing of the LGBTQ community and the injustice that threatened their existence on a daily basis.” It also noted that Pride month has since become a “celebration of love, living authentically, and accepting ourselves.”

“Everyone in Michigan benefits… from preserving the freedom, worth, and dignity of those in the LGBTQ community,” the resolution stated. “Michigan should expend all efforts to attract and retain talent and signal to the nation we are welcoming to all those who wish to contribute to the economic vitality of our state.”

However, Shirkey wanted to remove a section of the resolution that references the “tragedy” that the LGBTQ movement faced due to “the slow and insufficient government response to assist those with HIV/AIDS.”

Shirkey also wanted to include a statement that reads, “Though not every citizen in Michigan agrees with the lifestyle of the LGBT community, it is agreed that every life is special, precious, unique, and loved by the creator, and each person is created in God’s image.”

State Sen. Jeremy Moss (D), who is gay and Jewish, accused Republicans of “again throw[ing] Pride Month back into the trash heap,” noting that Shirkey’s aforementioned statement would be like amending a Jewish American Heritage Month resolution to state that “not everyone in the state of Michigan supports the Jewish lifestyle,” The Michigan Bridge reported.

Now the resolution is stuck in Shirkey’s committee where it is unlikely to pass before the end of the month. A majority of the state’s Republican-led legislature supported the same resolution without issue in 2021.

“This is clearly an intentional target against our community,” Moss told Axios. “This isn’t just me decrying it from within the community — it’s plain for anyone to see. [The Republicans’] agenda is to make you fear the gay agenda.”

“I guess the cruelty is the point,” he added, stating, “I will not be gaslit that [the resolution not passing] is my problem. I did not change the stakes. I did not move the goalposts. They did.”

Shirkey has claimed that the January 6, 2021 insurrection on the U.S. Capitol was a hoax intended to make former President Donald Trump look bad. Shirkey also claimed that “many” dead people voted in his state’s 2020 election, even though state election officials have said there’s no proof to support his claim.