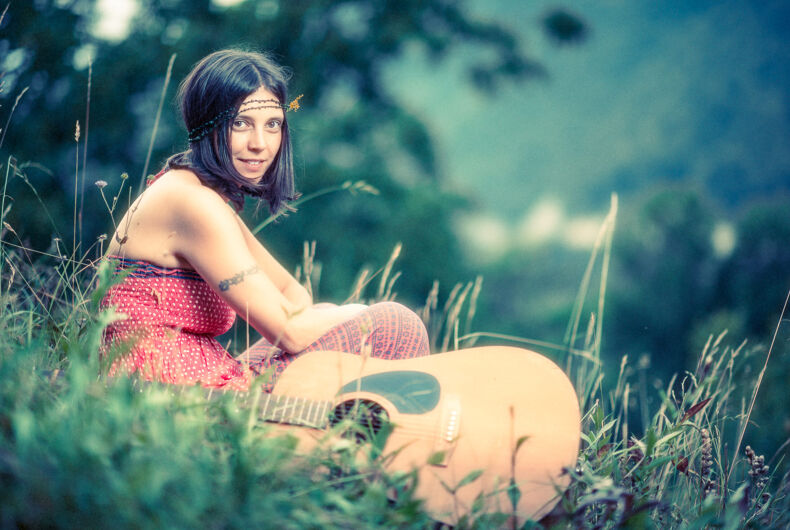 As a child growing up in Wyoming in the 1960s, I did not know an actual gay person.  I knew exactly one fact about gay people, a fact universally accepted but never talked about: gay people are strange. Even weird.  They weren’t yet called “gay” back then. They weren’t called anything because no one talked about them, but the unspoken label was either homosexual or queer.

Since I didn’t feel weird myself, it didn’t occur to me that I was gay. I just didn’t seem to have a boyfriend.  Then I went to college and found myself in an English class with a professor who was dynamic, funny, warm-hearted, eloquent, and, as it happened, gay. He was not the least bit strange.

Related: How to get smarter & fight harder for LGBTQ rights

The realization that gay people were not necessarily strange meant it was not impossible that I could be one of them.  Once my mind opened to this idea, other realizations followed, such as a different understanding of my crushes on dazzling older girls in my high school, and the awareness that a dorm-mate scurrying to bring me tomato juice when I was sick might have more than a friendship in mind.

Unlike many people coming out, I did not have difficulty with my family. Although we lived in Wyoming, my parents had come from a New England Unitarian tradition of tolerance. My mother figured out about what she called my “woman relationship” before I told her and my romantic choice was accepted without comment. However, in the wider world, anti-gay slurs were commonplace, and I stepped a bit carefully.

Coming out in those times taught me some important lessons. For instance, I learned that millions of people can believe something mistaken (gay people are weird), so it is wise to examine assumptions and get as much firsthand information as possible before drawing conclusions.

Also, I realized I couldn’t expect other people to be comfortable with me unless I was comfortable with myself.  Most of the progress in the last 50 years has come from gay people ceasing to cooperate in the self-judgment, fear, and silence that kept us hiding for so long.

And finally, I learned that it’s better to be on an obscure cowpath going the right direction than on a well-marked superhighway going the wrong direction. I found that being “different” from the majority was not as scary as it seemed.

Having the confidence to try things would shape many subsequent life choices. Equipped with a degree in English, I found myself programming computers. Later I moved to a small farm and my partner and I gutted and renovated the old farmhouse, learning building trades as we went along, from books and the advice of friends.

In 1990, starting with an idea that germinated as I was driving across the country in a truck and trailer hauling a bull calf, I wrote a novel with a very particular goal: to convey a more sympathetic understanding of the gay experience to a mainstream audience. That novel, Alma Rose, was discovered in the slush pile at Seal Press and published in 1993.

Curiously, the publication of Alma Rose coincided with one more big challenge, my first episode of multiple sclerosis. Multiple sclerosis is an autoimmune disease that attacks nerve cells in the central nervous system and disrupts the transmission of nerve signals. Its symptoms can range from minor numbness and tingling all the way to blindness, spasticity, loss of bladder control, crippling fatigue, and often, the need to use a wheelchair. Its cause is unknown and its course unpredictable.

At the time of my first episodes of MS, no medical treatments existed, and the doctors said there was nothing to be done except to live my life and wait to see what happened. I was not inclined to wait and see how bad things might get. I went to the medical library and started reading. I trusted that the doctors knew about the pharmaceutical options, but I was on the hunt for whatever else I could learn.

Because the disease was so baffling, there had been a lot of research into history and epidemiology. Where was the disease common? Where was it rare? Reading the research, I noticed a pattern the literature was not talking about: Places that consumed a lot of milk had a lot of MS; places that consumed little milk had little MS. When I mentioned this pattern to a relative who was a cancer researcher, he did a search of medical journals and found that French scientists had just published a study documenting a correlation between milk consumption and MS incidence.

So now I had something to try. I would stop consuming any milk products and see if that made a difference.

The concept was simple. The implementation was harder. I was extremely fond of milk products and they are everywhere in the American diet. But I had lived for many years off the more usual path, and that helped me now. If I could deal with being gay in 1978, I could survive without ice cream and cheese.

It has now been twenty-seven years since I changed my diet. I have had only one mild flare-up, in 2004, and my only residual symptom is slight numbness in my hands. I have never taken any MS medications.

Since I was the only person in my self-designed experiment, I don’t know if this good outcome is due to my actions or is simply chance. But after so many years, it feels like the right road, even if it is not on the conventional maps.

Edith Forbes is the author of Tracking A Shadow: My Lived Experiment With MS, a memoir about the self-designed experiment that led her to identify a unique approach to the disease. She has also written four novels published by Seal Press in Seattle. She began her career in computer programming but abandoned it for less logical pursuits including farming, house renovation, and writing.  In addition to novels and her memoir, she has penned essays, poetry, screenplays, and a cookbook.  She holds a degree in English from Stanford, was raised on a ranch in Wyoming, and currently lives on a small farm in Vermont.

Commentary
Coming Out, coming out in 1970s, life lessons, what I learned

Man stabbed trans woman while shouting slurs. He just got what he deserved.