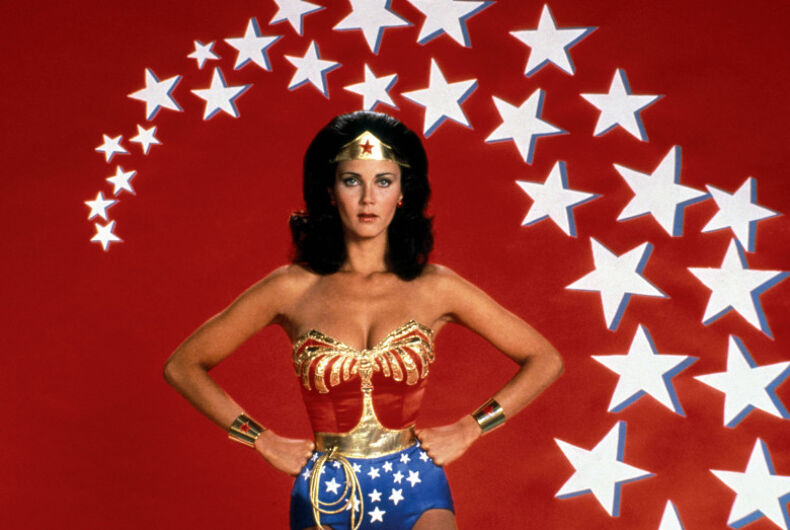 Carter then went on to share a Hollywood Reporter article that revealed Wonder Woman was bisexual in the comic books. Carter proudly stated that Wonder Woman is now a bisexual icon also.

I didn't write Wonder Woman, but if you want to argue that she is somehow not a queer or trans icon, then you're not paying attention.

Every time someone comes up to me and says that WW helped them while they were closeted, it reminds me how special the role is.

Love seeing all the love from LGBTQ+ fans today! Now here's one I call the "ready to fight your homophobic relatives" pose. Just kidding. (Or am I?) Haha! 😘 pic.twitter.com/5voHHdZViA

Carter has been an ally to the LGBTQ community for years and has shown how much she embraces her seminal character being a “queer or trans icon.” Earlier this year, Carter tweeted out her support for the transgender community during International Women’s Day.

Today we celebrate women and girls from all walks of life… And yes, that includes our trans sisters! 😘

To be a woman is to be a wonder, but it's no wonder that we are so strong and full of possibilities. Happy International Women's Day! pic.twitter.com/PCaOdUH54j

This isn’t the first time Carter has shown support for the LGBTQ community. Earlier this year in February, Carter tweeted out her support for the transgender community in Texas. This came after Gov. Greg Abbott’s (R) order to investigate families that allow their trans kids to get medical attention for child abuse and said that doctors, nurses, and teachers who don’t report parents who allow their trans kids to get gender-affirming medical care could face jail time.

His order was based on Texas Attorney General Ken Paxton’s (R) non-binding opinion that gender-affirming care denies patients their constitutional right to procreate.

There have always been trans kids. This is nothing new. Letting them live their truth will save their lives.

To all the trans kids and families who love them, in Texas and around the world: stay strong and keep fighting for your freedom.

Back in 2021, Carter expressed massive support for the transgender community. In December, her positive words came just after J.K. Rowling tweeted about trans women being rapists, leading many of Wonder Woman’s fans to conclude that she was subtweeting the über-wealthy Harry Potter author. Many fans tweeted their love for Carter after the supportive tweet.

It's always nice when your childhood hero is still a hero.

Besides fighting against transphobes like J.K. Rowling, she also speaks the truth like when she did back in October of 2021. Again, Carter tweeted her support for the transgender community, supporting trans women in particular for being “Wonder Women.” Fans responded to her tweet with lots of love.

Thank you! As a trans woman, you are the epitome of who I strive to be. Your style, grace, intelligence, beauty, there are more adjectives but we only get 100 characters, is what I emulate through my transition. 💋💜💋💜💋💜💋💜

Carter is proving to be one of the greatest LGBTQ allies and is one of the gold standards of celebrities who offer support 365 days out of the year. For any celebrity looking to be a better ally to the LGBTQ community, especially the transgender community, look no further than Lynda Carter, a true Wonder Woman on-screen and off.

Now to combat any homophobic relatives, Carter will be there in spirit in her classic crime-fighting pose to support all her LGBTQ fans.