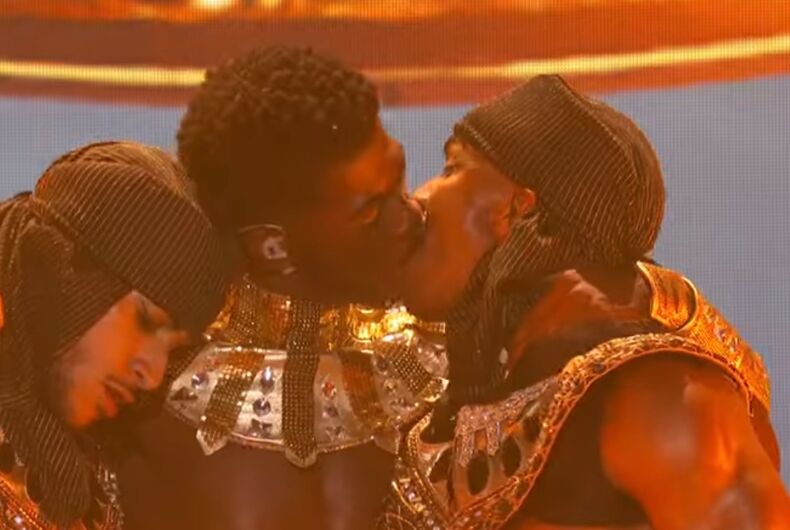 Earlier this month, out rapper Lil Nas X condemned BET and the BET Awards after receiving zero nominations for his album Montero. He later hit back at BET with a track called “Late to Da Party” featuring YoungBoy Never Broke Again.

Fans were curious about why Nas created the diss track after a successful performance at last year’s BET Awards; however, it turns out the performance wasn’t a success at all.

Speaking with Rolling Stone, unnamed members of Nas’s team revealed that a BET producer came up to one of them after the 2021 performance and said that it was “really f**ked up” to kiss another man on stage. Nas’s 2021 performance is famous for going viral after he finished by kissing one of his male backup dancers on the lips. The kiss was seen as a powerful moment for LGBTQ audiences who felt represented by Nas onstage.

The team member, speaking anonymously, said, “At some point after [Nas] got offstage, one of the BET producers came up to me and before I could even open my mouth, he looked at me and said, ‘That was really fucked up.'”

And it turns out that the drama between BET and Nas began even earlier before the awards show happened.

Nas issued a statement to Rolling Stone detailing his relationship with BET: “My relationship with BET has been painful and strained for quite some time. It didn’t start with this year’s nominations like most people might think. They did let me perform on their show last year, but only after [I gave] assurances that I was not a satanist or devil worshiper, and that my performance would be appropriate for their audience.”

Nas is referring to his music video for “Montero (Call Me By Your Name)” where he is seen giving the devil a lap dance and for his controversial “Satan Shoes.” After the previous events had transpired, Nas was approached by BET producers to ensure that his performance would not include any satanic worship.

However, the same-sex kiss wasn’t discussed in advance.

“The response we got back was, ‘We need to clarify a few things,'” another unnamed team member said. “Is he a Satanist? Are there going to be elements of devil worship or satan in the show? I was so taken aback by it. We’d been fielding those questions from people for months by that point after the video and the shoes, and of course, the answer was no and we obviously got the slot. But it blew our minds.”

“When Nas created ‘Montero,’ he knew what he was doing. He wanted to create a queer-pop anthem. He wanted to make a statement based on what he’s heard from people probably his whole life as a gay man,” the source added. “That statement was very clear to me. But they’ve all missed the message so much that all they see is the devil. There was no contemplation that this was what he’s always heard and that now he’s embracing it.”

The performance ended up being a proud moment for Nas and LGBTQ audiences, and although BET states their support for Nas, he believes they are disingenuous.

“They say that ‘no one cheered louder’ for me than them that night but the BET Awards team was actually very upset that I kissed my dancer onstage and vocalized their discontent with multiple members of my team immediately following the performance.”

And Nas and his team believe that it is because of this performance in 2021 that he was snubbed this year at the BET Awards.

“It’s almost like they didn’t mind sweet kind of gay ‘Old Town Road’ Lil Nas X, but this is too much,” the second team member said. “I think BET is doubling down on what they did wrong. Instead of saying, ‘We got it wrong,’ they said, ‘It’s [the voting] community and they don’t f**k with him,’ which is bulls**t. All the accolades, the achievements Nas has had in his career, all the music people have consumed, the [voting] community doesn’t f**k with him? What are you talking about?”

Although Nas feels snubbed by BET, the rapper still has a large support system of other artists who respect and admire him. At the 2022 BET Awards, “Industry Baby” collaborator Jack Harlow showed his support for the “Montero” singer.

Jack Harlow was seen wearing a Lil Nas X shirt on the BET Awards red carpet and Nas tweeted out his gratitude for the gesture.

In a statement, BET denied the rapper’s criticism of the awards saying that the “summation of events around Lil Nas X’s 2021 BET Awards performance is simply untrue. Since last year’s performance, we have been in touch to work on other projects. We are still excited about his previous performances and continue to wish him well.”

Vandal arrested for spray-painting Target’s Pride display. He could get locked up for years.

What is the MLM Pride flag?