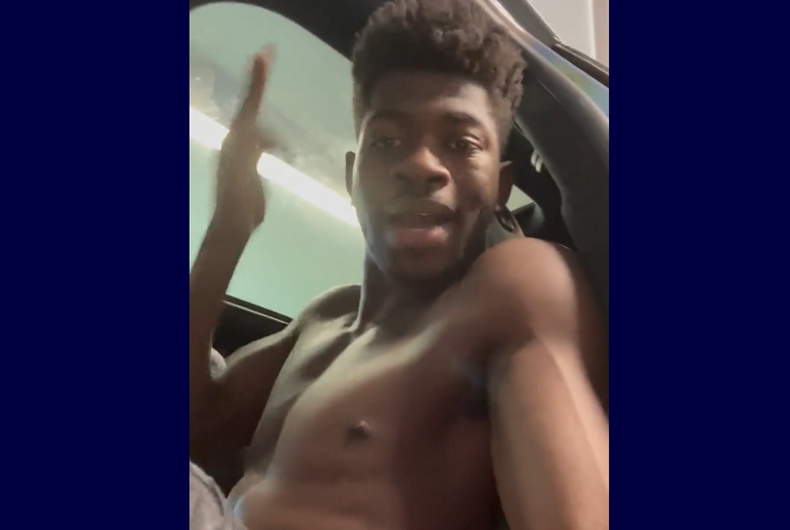 Lil Nas X isn’t having it.

The 23 year-old multi-platinum, Grammy-winning artist is fuming over his BET Awards nomination shut-out and has a new track saying as much.

Nas released a one minute tease of the new song, “Late to Da Party” featuring YoungBoy Never Broke Again, shirtless and writhing in a parked car: “Lick it on up, slurp it / Make it sloppy, ok, ok, ok, ok / Look at how I top s— / I just put like three up in the top 10.”

The three up in the top ten include “Industry Baby,” “That’s What I Want,” and “Montero (Call Me By Your Name)” from the artist’s debut album Montero, released in 2021. All the tracks hit no. 1 on the Billboard Hot 100. Despite their popularity, neither the album or any of the singles rated a BET nod.

“thank you bet awards. an outstanding zero nominations,” he wrote on Twitter in a post since deleted. “black excellence!”

BET responded re Nas: “Unfortunately, this year, he was not nominated by BET’s Voting Academy, which is comprised of an esteemed group of nearly 500 entertainment professionals in the fields of music, television, film, digital marketing, sports journalism, public relations, influencers, and creative arts. No one from BET serves as a member of the Voting Academy.”

The Black-owned and operated network added: “At BET, we are passionate advocates for the wonderful diversity that exists within our community. We are committed to using all of our platforms to provide visibility and inclusion for all of the many intersections of the Black community.”

Nas says the issue is bigger than a nomination diss: “this is about the bigger problem of homophobia in the black community.”

this not over no bet award this is about the bigger problem of homophobia in the black community, y’all can sit and pretend all u want but imma risk it all for us.

The awards show has recognized Nas in the past: in 2020, he lost a Best New Artist award, but stole the spotlight with a show-stopping performance of “Montero (Call Me by Your Name)” featuring some deep kissing with male dancers.

In 2022, the Grammys nominated the same song for Song of the Year, its video for Video of the Year, and his album for Record of the Year, while in 2020, Nas was the most-nominated male artist at the 62nd Grammys, where he ultimately won awards for Best Music Video and Best Pop Duo/Group Performance.

Nas points out another irony: while he failed to receive any BET noms, his collaborator on “Industry Baby,” the album’s biggest selling track, did. Jack Harlow, who is white, picked up a nomination for Best Male Hip Hop Artist.

funny thing is industry baby was the biggest song me & jack released last year in the eligibility period but only one of us got a nomination https://t.co/3DUkngGnXN

Pride In Pictures: Queen for a day at pride