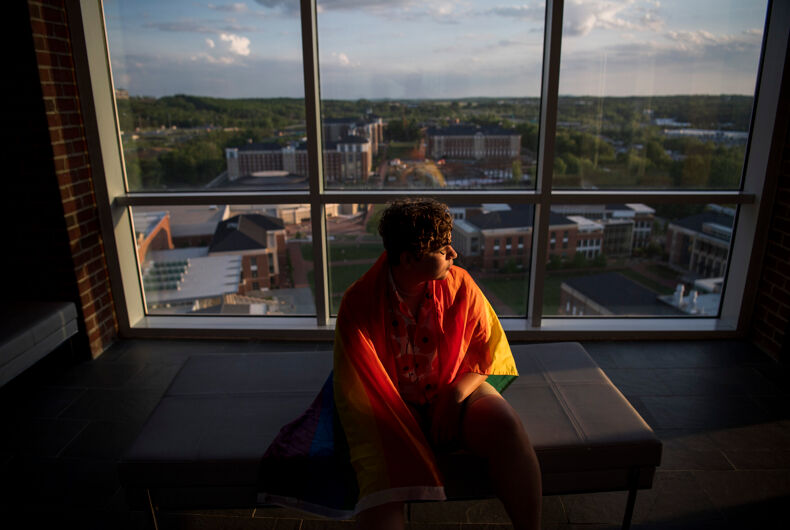 Some Liberty University students joke about the irony of the word “Liberty” in the school’s name. A long list of rules in the student honor code seemingly contradicts the so-called freedom implied in the school’s name. Now, with the ban on “statements and behaviors associated with LGBT states of mind,” the university has snatched even more liberty from the reach of students.

Students know The Liberty Way as the code of conduct the university expects them to uphold. Unknown to most, The Liberty Way was quietly updated days after Thanksgiving break in 2021 to actively discriminate against students who are members of the LGBTQ community. Now queer students live under the daily fear of expulsion on the basis of their sexuality or gender identity.

Related: India’s drag scene is nothing like America’s. Here’s how it’s different & why

“Sexual relations outside of a biblically-ordained marriage between a natural-born man and a natural-born woman are not permissible at Liberty University. While mental thoughts, temptations and states of mind are not regulated by The Liberty Way, statements and behaviors that are associated with LGBT states of mind are prohibited. For example, romantic displays of affection with a member of the same sex (e.g., hand-holding, kissing, dating, etc.) and actions confirming denial of biological birth sex (e.g., asking to be referred to by pronouns inconsistent with one’s birth sex, using restrooms and changing facilities reserved for persons other than one’s birth sex, etc.) are prohibited. In personal relationships, students are encouraged to know and abide by common-sense guidelines to avoid the appearance of impropriety. Activities inconsistent with these standards and guidelines are violations of The Liberty Way.”

For LGBTQ students, such words had already been unspoken law on campus at Liberty University. Now the community faces certain discrimination under the new restrictions.

In recent years, multiple scandals, including the resignation of former president Jerry Falwell Jr. and the lawsuit filed by women with claims that Liberty improperly handled their sexual assaults, tarnished Liberty University’s reputation.

In the midst of the backlash, the school’s decision to surreptitiously edit The Liberty Way slid under the radar of the student body, the media, and most importantly the queer community on campus. No public announcement was made, and even those impacted the most didn’t notice the change until two months later.

Before, The Liberty Way indirectly acknowledged the LGBTQ community in the section called “Sexuality and Relationships.”

“Sexual relations outside of a biblically-ordained marriage between a natural-born man and a natural-born woman are not permissible at Liberty University,” the old version of the Liberty Way read.

In the new revision, Liberty University added more to the code to directly condemn homosexual relationships and transgender or nonbinary identification.

“While mental thoughts, temptations and states of mind are not regulated by The Liberty Way, statements and behaviors that are associated with LGBT states of mind are prohibited. For example, romantic displays of affection with a member of the same sex (e.g., hand-holding, kissing, dating, etc.) and actions confirming denial of biological birth sex (e.g., asking to be referred to by pronouns inconsistent with one’s birth sex, using restrooms and changing facilities reserved for persons other than one’s birth sex, etc.) are prohibited.”

In 2019, students formed a protest on campus advocating for LGBTQ rights and the #MeToo movement. Now making any statement with an “LGBT state of mind” breaks the rules, meaning students are not permitted to exercise their First Amendment rights without violating The Liberty Way.

Freedom of speech is an unusual target for Liberty University to shoot down based on its history of rejecting censorship and clinging to the First Amendment. A Liberty-associated initiative called The Standing for Freedom Center serves as a mouthpiece for conservative propaganda, dedicating plenty of time to the topic of free speech. The center claims to champion values like life, liberty, and truth.

The reality couldn’t be any different. There is no freedom for anyone to even come out as gay without violating The Liberty Way and facing the consequences. Freedom of speech is only a right for students as long as they are saying what the university agrees with.

Meanwhile, the Standing for Freedom Center uses its First Amendment rights to lash out at the LGBTQ community. One recent article describes coming out as trans as a “transdemic” in a “highly contagious and transmissible craze of transgenderism and trans ideology that is spreading like gangrene, infecting the minds and poisoning the hearts of our nation’s children.”

The founder of Liberty University, Jerry Falwell Sr. once featured a cover for his Moral Majority Report with a headline reading “Homosexual Diseases Threaten American Families.” Pictured is a family wearing masks, seemingly to protect themselves from the “AIDS” written in all caps above. Fifty years after Liberty’s founding, the same rhetoric is still used to describe the LGTBQ community.

Jerry Falwell Sr. may have felt personally threatened by the queer community but the tables have since turned. Today his legacy threatens queer students at Liberty University. Alessandra, a junior majoring in IT, says the new rules are hurtful to her as a transgender woman wanting to be referred to by she/her pronouns.

“I think that it’s really disheartening being told that I’m required to use the pronouns that I was assigned at birth because it’s a direct affirmation that Liberty is against my very existence,” Alessandra said. “I’ve always been aware that they fundamentally disagree with LGBTQ identities but it just makes your life as a student all the more stressful, scary, and lonely when your college actively opposes a core element of who you are as a human being.”

When a student violates the honor code The Liberty Way lists a set of punishments at varying tiers of severity according to the offense. Violating the Statement on Sexuality and Relationships at the highest level could mean a punishment of a $300 fine, 30 hours of community service or even expulsion.

“When I first heard about the updates, I wanted to throw up. For about a week, I kept going back to the new update and rereading it because it just didn’t feel real to me,” said Haven Chace, who identifies as bisexual and just graduated from Liberty University. She continued, “And, honestly, this shift happened about a month after Jerry Prevo officially assumed the office of Liberty University president. We all knew of his homophobic streak in Alaska. This doesn’t exactly feel like a coincidence.” [Note: she misspoke–it was two months, not one month.]

In a recorded conversation between Prevo and a university official, Prevo declared his intention to continue manipulating a legal exemption to keep discrimination alive under his watch.

“I have a 50c3 church,” Prevo said, according to Politico. “For 30 years, I’ve known how to handle that and not get into trouble. The homosexual community has tried to take me down for at least 30 years, and they have not been successful because I know how to work the 50c3.”

Liberty makes the rules–even if they are discriminatory–and it’s lawful via a legal loophole in Title IX laws: religious exemption.

That’s not the only area in which the government enables Liberty University to get away with discrimination. In 2019 alone Liberty University received over $720 million in funds from the federal government for aid and grants for its nearly 80,000 students. That money helps further the university’s mission of “training champions for Christ,” which is advanced today by enforcing the new homophobic and transphobic rules.

Over the years, the rules enforced in the Liberty Way have changed many times. Mark Hyde, the Associate Dean of Students and Executive Director for the Office of Community Life, said in an email that The Liberty Way is looked over and sometimes edited once a year. He declined to comment further on any behind-the-scenes information on revisions.

“Suffice it to say that we prayerfully review the Liberty Way annually and make adjustments as needed,” Hyde said in an email.

Last year, it was prayerfully decided that new discriminatory rules needed to be added. While it’s still unclear as to who actually drafted the new edit to the Liberty Way, upper administration is responsible for the approval and implementation of the discriminatory addition. The change was also made without consulting Liberty’s Office of Equity and Inclusion.

Ellen Black, the current Executive Director of Inclusion, Diversity and Equity, declined to comment on where they stand on the matter, but she did say her department was not consulted on the new additions to the Liberty Way.

In its “about” section online, the Office of Equity and Inclusion declares its purpose partially includes the promotion of “biblical based diversity,” which may offer a route for the department to defend the discrimination based on religious beliefs.

“Biblical based diversity, equity, and inclusion efforts are crucial to Liberty University’s mission of training champions for Christ,” the statement reads. “We are here to serve all students, faculty, staff, and leadership by making every effort to promote inclusiveness and impartiality throughout our institution and standing against all forms of unbiblical discrimination.”

That means “biblical diversity” could be interpreted as not including the LGBTQ community because of the religious lines crossed by affirming the queer community. Despite the promise to serve all students, the Office of Equity and Inclusion, while promoting diversity and condemning injustice, has done nothing to help the queer community in the face of the new discrimination.

The new Liberty Way promises a dark future for queer students. The underhand discrimination silently forcing rights away from students is not only a violation of freedom but also brings Liberty backward.

Even though the everyday existence of LGBTQ students is threatened daily at Liberty University, the community is surprisingly resilient. A small community online stays connected in a group of nearly 200. Chace says the community is strong because it has to be.

“Living in an environment where people tell you you’re going to hell or threaten you with fines or expulsion for something beyond your control… it can be so disheartening,” Chace said. “But we manage to live beyond that.”

CDC reports one of the worst meningitis outbreaks among gay & bisexual men in U.S. history