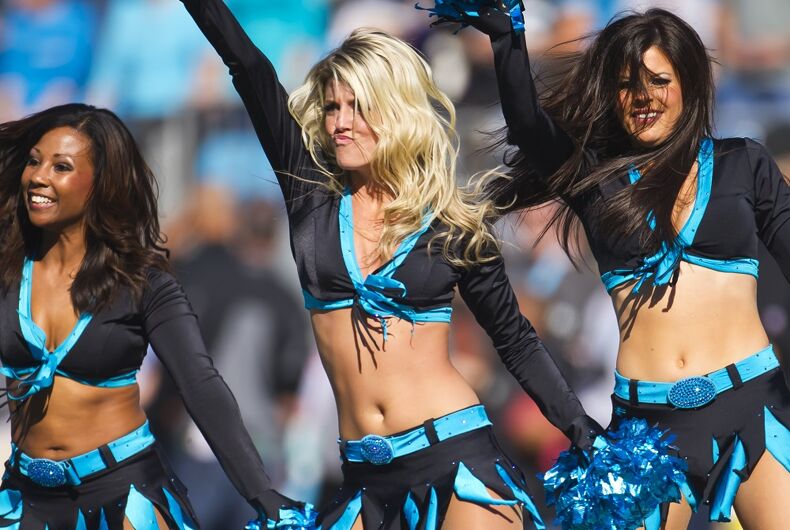 Nov. 21 2010 - The TopCats perform at a Carolina Panthers gamePhoto: Shutterstock

“You are looking at the newest member of the Carolina Panthers TopCats,” the 29-year-old wrote in a celebratory Instagram post back in March announcing her membership on the team’s cheerleading squad and officially coming out publicly as trans. “This is a moment I will never forget and I cannot wait to show you all what this girl has to bring.”

In her first interview, Lindsay tells BuzzFeed News about the fear she had to overcome to make the announcement. “I just felt like when I posted it, whatever reaction I get from everyone, it does not matter.”

She also thanked TopCats coach Chandalae Lanouette in that initial post. Lanouette says she was aware of Lindsay’s gender identity, but that it was her talent that secured her place on the squad. “My goal is to create a team of individuals that are absolute fire on the field but are incredible human beings in the locker room, good friends, good people, and at the end of the day, you have to walk through the door first to get to that spot.”

At a time when transgender youth are under attack, particularly in the sporting arena, Sam Ames, the Trevor Project’s director of advocacy and government affairs, says Lindsay represents “critical” visibility for young people. “She can give young people watching a dream to hold on to and a future to hold out for.”

“I’m happy because I was able to break down that door and tell people, ‘Hey, we are not just sexual beings,’” Lindsay said. “‘We are actual human beings who want to better ourselves.’ I felt like, Why not tell the world: ‘Hey, listen, this is a great accomplishment.’”

As is all too predictable, Lindsay received some backlash online after the announcement. But she’s taken it in stride, clapping back in another post. “The carolina panthers Organization is an excellent one, one that supports all people white, black , yellow trans, straight etc.,” she wrote. “I’m paving the way for those under me who are scared and afraid to take that step because it is not easy to do when you have ignorant people making comments that didn’t go through the process like the rest of us.”

Lindsay’s accomplishment is all the more significant in the context of the NFL. In recent years, the league has come under increased scrutiny for the long-term effects of players’ frequent head injuries, as well as its treatment of Colin Kaepernick. The former San Francisco 49ers quarterback alleges he was blackballed after repeatedly taking a knee during the National Anthem to protest racial injustice and police killings of Black Americans.

The participation of transgender athletes in elite sports has also become a hot-button issue, with swimmer Lia Thomas recently becoming a lightning rod for those who insist trans women shouldn’t be allowed to compete in women’s sports.

Pride In Pictures: Working it at pride