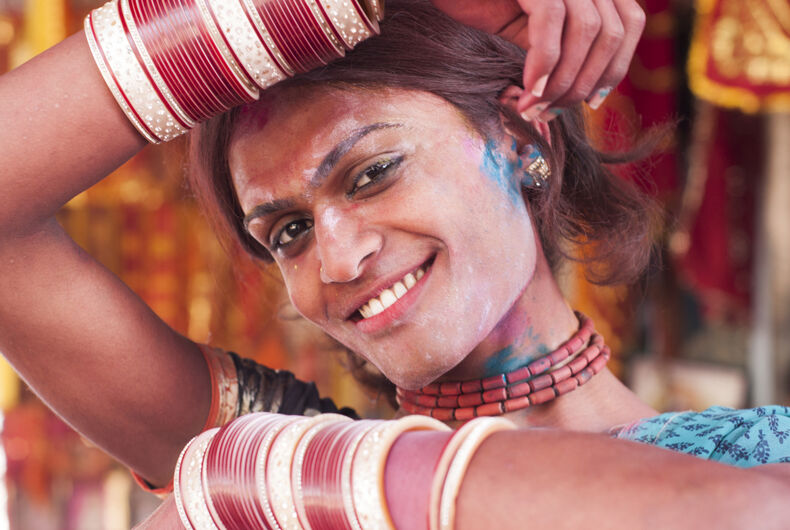 In 2005, Living Smile Vidya, an Indian theatre artist who identifies as a transgender woman, was living in a commune for transgender persons in Pune, Maharashtra. There, she was once asked if she eats meat. “I eat everything – beef, mutton, chicken,” she responded, “But beef is my favorite.”

After some time, one of her sisters from the same commune whispered in her ears, “Next time somebody asks you if you eat meat, don’t be stupid and mention you eat beef. People will assume you are Dalit.”

Vidya, or Smiley as she prefers to be called, was surprised. “I am Dalit, but why would people assume that?” she asked her friend. But the incident opened her eyes: despite being in a supposedly safe space for transgender women, there was one identity she was supposed to hide – her caste.

The caste system is a rigid hierarchical system of segregation that divides people into several categories based on the traditional occupation of one’s birth family. Codified in several ancient Hindu texts, most notable of which is the Manusmriti, the caste system is one of the oldest – and still surviving – systems of social stratification.

At the top of the caste pyramid are Brahmins, i.e., priests. Following the Brahmins, in order, are Kshatriyas (warriors), Vaishyas (traders), and Shudras (laborers; people doing so-called menial tasks).

For example, Smiley is Dalit and comes from a caste group that traditionally practiced manual scavenging. Since traditional occupations of certain Dalit communities – like scavenging – were deemed “dirty”, Dalits were historically considered “untouchable”. The practice of untouchability also meant that Dalits lived in segregated colonies, were deprived of social capital, and faced violence and harassment at the hands of upper-caste individuals.

It has been argued that there are similarities between casteism – the act of discriminating against somebody due to their caste location – and racism. For example, Rajesh Sampath points out in an article for The Conversation that Dalits are at a higher risk of poverty, much like African-Americans. Sampath also points out that despite anti-segregation laws in the US, “cultural and political segregation of the public space continues to occur.” This, according to Sampath, is also true in the context of caste in India.

In 1950, the Constitution of India banned the practice of untouchability and discrimination based on one’s caste. Despite that, as Sampath points out, Dalits are often forbidden to enter Hindu temples, have abysmal representation in Indian educational institutions, and crimes against Dalits continue to rise.

However, several people have pointed out marked differences between race and caste. For example, Arjun Appadurai has written in The Wire about the different origins of the race and caste systems.

Further, Appadurai also points out that race functions through an impervious binary – that is, “black vs white” – where one black person may not feel superior over another black person. On the other hand, castes at the bottom of the pyramid are “strangely porous”. According to Appadurai, even the lowest caste groups in the pyramid have people beneath them “who [perform] polluting services (like cremation, scavenging and hair-cutting) for them”, creating an infinite pyramid where somebody is always lower than the other.

According to Smiley, it is true that Indians are also racist. “Our villains are always black, and our heroes and heroines are always super fair and super white,” she told LGBTQ Nation. However, she believes that racism in India is inexorably linked to caste. For example, she mentions the highly prevalent misconception that people from lower castes have “dark skin” while people from upper-caste backgrounds have “fair skin.”

Being Trans, Being Dalit

Dalit transgender women are intersectionally marginalized through the “combined might of patriarchy, transphobia and casteism,” says Smiley.

Both Dalits and transgender persons are “socially conditioned to internalize that they are meant to do only some jobs,” Smiley said. She told LGBTQ Nation that as a Dalit person, the most she can imagine as an occupation is a doctor or an engineer.

“I didn’t know I could also become a NASA or an ISRO [Indian Space Research Organization] scientist, or an auditor in the Reserve Bank of India, because that’s the limit of my exposure,” she said.

Sudipta Das, who works at the YP Foundation, echoes Smiley’s experience. Das comes from a marginalized caste location and identifies as gender non-binary. They spoke to LGBTQ Nation about how their caste and gender locations informed their choice to work in the development sector. “From one’s childhood, one is told that if you are trans, then you cannot make it into the corporate world.”

They spoke about how the abilities of Dalit and transgender persons are constantly questioned. In India, a certain number of seats/positions are reserved in government institutions for people from marginalized caste backgrounds. This is to enable the social mobility of people from historically marginalized caste groups. People from upper-caste backgrounds have generally been anti-reservation, claiming that reservations dilute merit, although the Supreme Court of India recently upheld the constitutional validity of reservations.

“There is a constant doubt on one’s merit in both ways,” Das said, referring to how doubts on their capabilities are amplified because they come from both a marginalized caste and gender identity.

Smiley also believes that transgender persons may unconsciously practice traditions rooted in the caste system. For instance, a tradition that Hijras, a cultural transfeminine group in India, follow. Hijra communes follow a matrilineal organization, and junior commune members are expected to greet an elder by saying “Paam padti”, which translates to “I bow to your feet.”

“Why do you translate respect to touching your feet? Why is there no equality and more hierarchy in our community? Where does this come from?” Smiley asks. The answer, according to her, is the caste system.

However, Smiley cautioned, “I am not degrading our community. Casteism is a problem that exists all over India, and we need to recognize it seeps – consciously or unconsciously – in trans spaces too.”

She believes that recognizing this problem is the first step toward alleviating it.

Das told the LGBTQ Nation that when they first came out in 2011, they often had to mask their caste location to be accepted in queer and trans spaces. “There is a constant fear for people like us about what will happen if people come to know of our caste location,” they said.

“I had high expectations that queer and trans spaces are going to be affirming, but I don’t think they were in many ways,” they added.

Arya (name changed on request), a journalist who identifies as a gender non-binary person and comes from a marginalized caste location, reports a similar experience to Das’s. “I am more open to people knowing about my queer self than my caste location,” they said.

Smiley also highlighted “generational privilege” – the idea that social, cultural, and political privileges are passed from one generation to another, ensuring people from upper-caste backgrounds have better education and employment. Generational privilege, according to Smiley, also plays a role in determining who among transgender persons would have to resort to begging and sex work to make a living and who would be able to access better options, for example, being in the upper echelons of a Non-Governmental Organization (NGO).

“I have never seen a Brahmin trans person resorting to begging,” she recounted.

Dalit transgender persons are often recruited only at the bottom ranking positions in NGOs, Smiley pointed out, while upper-caste individuals control how these spaces function. According to her, when Dalit transgender persons are recruited into these organizations, they are exploited and made to work as “peer volunteers”, which means that they play no strong role in their organization and receive very little pay.

Ragamalika Karthikeyan, an editor at The News Minute who identifies as a genderfluid person and is a Brahmin, talks about how her upper-caste location has allowed her greater social access. “The fact that I came out late in my life, combined with the fact that I am a privileged person by caste, means the opportunities that I have with regards to work are much better than the opportunities that a trans non-binary person would have if they are from a marginalized caste,” she told LGBTQ Nation. “I’m not seen as a threat on multiple layers in a workplace,” she added.

Further, Ragamalika also mentioned that her authority is not questioned as often because of her privileged caste location. “I know that even cisgender and heterosexual Dalit people in leadership positions face much more questioning when compared with a queer or non-binary person with caste privilege in a similar position,” she said.

Smiley also mentioned Dalit-Trans solidarity. She talked about her conversations with cisgender Dalit individuals: “I try to explain that they have also been made to feel less human by Savarna castes [upper-caste individuals] in a way similar to how society treats Thirunangais [transgender women]. I ask them why they can’t understand our pain when they have had similar experiences individually and historically.”

She mentioned that it is often the same cycle of discrimination and lack of opportunities that ensure transgender persons – like Dalit individuals – remain restricted to occupations traditionally demarcated for them. She pointed out that transphobia ensures that transgender persons in India have “no other option but to do ‘dirty’ jobs like sex work and begging, and then calls us ‘dirty’, just like the caste system did with Dalits.”

For Smiley, transphobia is a form of Brahminism. “Dalit comrades need to fight patriarchy and transphobia along with casteism,” she said, much like transgender individuals need to recognize casteism within their communities and work consciously towards dismantling caste.

BR Ambedkar, the economist, social reformer, and political activist under whose supervision the Indian constitution was drafted, was of the opinion that “internal reform of the caste system is virtually impossible,” since dismantling caste would require people from upper-caste backgrounds to give up their generational privileges. Smiley agrees with Ambedkar.

The responsibility of dismantling caste, therefore, undoubtedly lies on people from upper-caste backgrounds. Ragamalika told LGBTQ Nation that as someone in a leadership position in a newsroom, she has consciously attempted to ensure that while hiring, she gets in at least a few people from marginalized caste backgrounds to the table. However, she added, “I have definitely not done enough.”

Smiley reiterated to LGBTQ Nation that the fight against casteism and the fight against transphobia cannot be seen as distinguished from each other. It is important that the queer- and trans-rights movement in the country focus on the education and employment of transgender persons, she believes.

Several state and central government policies in India have proposed a vertical reservation, where transgender persons would be subsumed within the Other Backward Classes (OBC) category – one of the socially and economically disadvantaged groups that have reservations in education and employment.

Transgender rights activists, including Smiley, have been opposed to this move. For example, Smiley has previously said that subsuming transgender persons within the OBC category would mean that Dalit transgender persons would not only have to compete with upper-caste trans individuals, but also with cisgender people.

She advocates for “horizontal reservation”, in contrast to vertical reservation. That is, transgender persons should be offered separate reservation at par with people from other backward classes, people with disabilities, and people from economically weaker sections of the society.

A recent judgment from the Madras High Court has given a glimmer of hope. The Court advised the government of Tamil Nadu to provide separate reservations for transgender persons. A report on the judgment from The News Minute quotes the judge saying that these reservations are to be provided apart from “other relaxations and concessions extended to the socially and economically backward classes.”

Is the government listening? Only time will tell.

Sayantan Datta (they/them) is a queer-trans journalist who writes at the intersections of science, gender, sexuality, caste, and health.