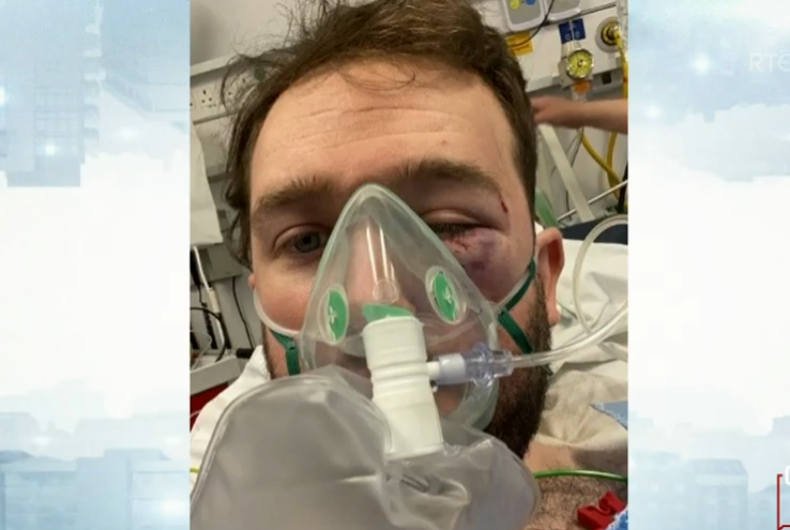 A brutal homophobic assault has left an openly gay Irish Rugby players uncertain whether he will every play the sport again. A over a month after the beating, which occurred in Dublin in April, Evan Somers appeared on Irish chat show Claire Byrne Live to talk about the attack that may have jeopardized his career.

“We were trying to get a taxi,” the 23-year-old said, recalling the incident. “I just remember this guy coming up and kinda singling me out and calling me names.”

Somers says he does not remember much after being punched. He sustained a fractured eye socket, a dislocation of his left ankle, and two fractures. Ireland’s Sunday Independent reported in April that several others joined the initial attacker. This group committed another unprovoked attack that same night, though they had no connection to Somers’s attacker.

“Last night a stranger called me a fa***t before beating the shit out of me,” Somers tweeted the day after the attack along with photos of his injuries. “He left me with a fractured eye socket, 2 fractures in my ankle, a dislocation in my ankle & some other minor injuries. We’ve come a long way but still have such a long way to go in terms of equality.”

Somers believes he was specifically targeted as he was coming out of a local gay bar.

“I think he knew exactly what he was doing,” he said of his attacker.

“I don’t think my ankle’s ever gonna be properly the same,” Somers told Byrne. “I’m not sure when, if ever, I’m gonna get back to doing the things I was doing before.” Somers played for the Emerald Warriors. On its official Instagram account, the team describes itself as “Ireland’s first LGBTI+ inclusive rugby team.”

And the scars go beyond the physical. Somers says he’s more wary going out now than he used to be. “I think I was a little bit naïve. Somewhere deep down I think you know things like this do happen. But in 2022…especially in Dublin, it’s weird. It’s like the Middle Ages,” he said. “I’d be quicker to look over my shoulder now.”

Appearing alongside Somers, out radio and TV presenter Stephen Byrne, himself a victim of homophobic assault, said the attack sends a message to Dublin’s LGBTQ community.

“When something like that happens it reverberates throughout the entire community.”

Last night a stranger called me a faggot before beating the shit out of me. He left me with a fractured eye socket, 2 fractures in my ankle, a dislocation in my ankle & some other minor injuries. We’ve come a long way but still have such a long way to go in terms of equality. pic.twitter.com/aAA8OQ83QY

Does an Indian transgender person’s caste change their experience of being trans?