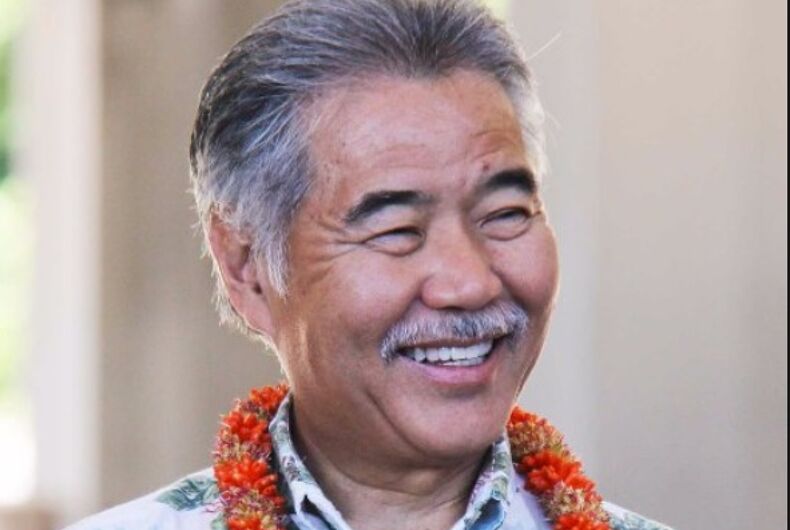 Hawaii is celebrating Pride Month by adding new protections for LGBTQ residents. These new laws echo similar protections that Governor David Ige signed into law back in 2019. The laws provide protection for insurance coverage, jury selection, and an LGBTQ commission to run on a permanent basis.

Ige posted the news on Instagram to celebrate Pride Month, as he did in 2019. Some things have changed since then, including the election of Hawaii’s first out elected official, Adrian Tam, who had some happy thoughts to share on the signing of the bills.

Related: Adrian Tam is on his way to becoming the only out LGBTQ elected official in Hawaii

At the signing, Tam said, “My hope is that we send a strong message across the nation that while some states are looking backward, Hawaii will continue to move forward.”

In his statement on Instagram, Ige shared exactly what the LGBTQ protections will be.

The first bill ensures that “insurance providers will be prohibited from excluding gender-affirming treatments when medically necessary and will require health plans to provide information on gender transition services.”

The second bill ensures that “gender identity or expression cannot be a reason for excluding a citizen from jury service.” This bill follows right in line with the 2019 law banning the use of gay and trans panic defenses in criminal cases, ensuring that the legal system is equitable for Hawaii’s LGBTQ citizens.

The “gay panic” defense refers to when defendants claim that they committed a crime because their heterosexuality was effectively questioned when a person of the same sex made a perceived sexual advance on them. Similarly, the “trans panic” defense is often used by perpetrators of violent crimes claiming they lost control after learning that someone with whom they engaged in sexual activity was transgender.

The final bill establishes the Hawaii State Lesbian, Gay, Bisexual, Transgender, Queer, Plus commission on a permanent basis. The commission addresses LGBTQ issues throughout the year and works to solve them with the help of lawmakers.

When announcing the three bills, Ige had this to say: “Collectively, these 3 bills are critical in supporting the LGBTQ+ members in our communities. They will help us identify social and community issues more effectively and ensure that we can work to prevent discrimination in many areas of our society.”

A 2019 bill also allows applicants a third option in addition to male and female for driver licenses: an “X.”

Why I left my job teaching this year