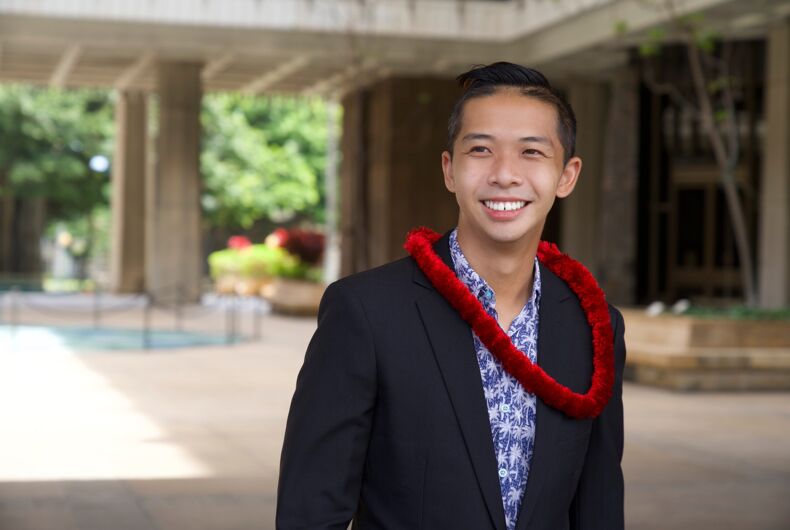 28-year-old Adrian Tam, running for the Hawaii state House of Representatives, is on his way to becoming the only out LGBTQ elected official in the entire state.

On August 8th, Tam won the Democratic primary for District 22, defeating incumbent Tom Brower, who has represented the district since 2006. On November 3rd, Tam will now face off against Republican Nicholas Ochs.

Related: Washington state may elect a progressive bisexual woman to Congress in November

Due to Hawaii’s extreme liberalism, Tam told LGBTQ Nation that his sexuality has barely come up in the race, but nevertheless, he said, bringing LGBTQ representation to Hawaii government would mean a lot to him.

“Our district is very LGBTQ friendly, and our entire state is as well,” he said. “I know that there are many young adults and children in Hawaii that are probably LGBTQ, and I’m hoping that my election will inspire them to know that things are possible.”

Tam has long been a warrior for the rights of LGBTQ Hawaiians. In fact, while working for Senator Stanley Chang, he wrote the bill that banned conversion therapy for minors, which passed in 2018.

“That was by far one of the proudest days that I’ve had working for a legislator, when Governor Ige signed it,” he said.

He decided to run for the Hawaii House because “Hawaii wasn’t working for a lot of the families here,” he said.

The rising cost of living has made it difficult for many residents to stay in the state, Tam explained. “Many of our young professionals are leaving for opportunities elsewhere, and our leaders don’t seem to care.”

Tam is focused on diversifying Hawaii’s economy so that it isn’t so dependent on tourism. This is especially important to think about during the COVID-19 pandemic, he said, when tourism essentially came to a halt.

“The plan I’m proposing is an investment in green manufacturing and green technology that would funnel money into the University of Hawaii to create research and allow that research to be used by any business, corporation, or entity for free, as long as they operate out of Hawaii and hire a 50% quota of a local workforce here. It creates thousands of jobs and it helps us meet clean energy goals and fight climate change.”

While Hawaii is heavily Democratic, Tam said it doesn’t stop elected officials from vehemently disagreeing with one another. He believes he will be able to work well with anyone.

“People are always at each other’s throats, not communicating, not looking out for what’s best with the people. Ultimately, I will work with anyone to pass good legislation for the people…You can be reassured I will do what’s best for Hawaii and for its future, and if that means working with someone I absolutely despise or someone I don’t agree with, I will work with them.”

Tam also said he hopes to bring a greater community feel to his district, such as building a community garden and hosting an annual neighborhood fair. Indeed, Tam has worked hard to make his campaign feel like a community, even sending out handwritten letters to constituents that include his cell phone number.

“What I want voters to know about me is that I’m just a local boy born and raised in Hawaii who desperately wants to call this place home,” he said. “But with everything that’s going on, with the high cost of living, with the rising housing shortage, homelessness, crime, and everything, it has become impossible for me and people like me with my resume to live here, and I’m going to fight to make sure Hawaii works for everyone and not just a select few.”

This year’s elections are about Donald Trump, not internal Democratic fights