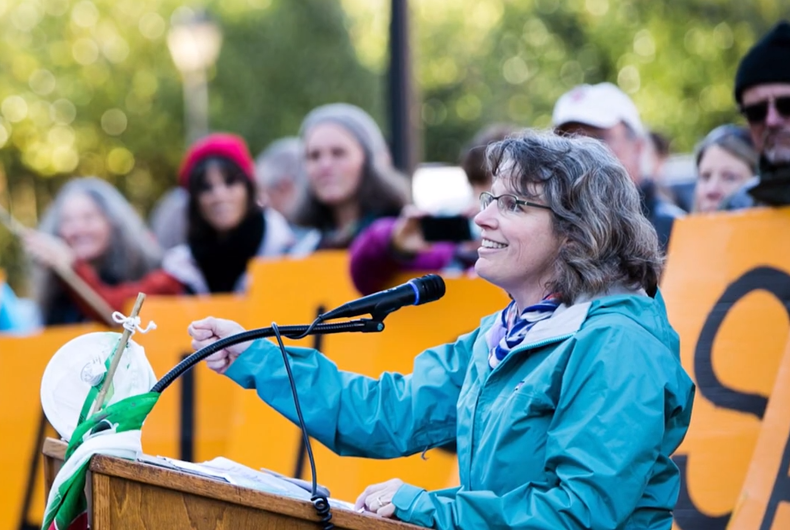 Washington state representative and Democratic Congressional candidate Beth Doglio wants voters to know that she’s a fighter. “I don’t give up,” she told LGBTQ Nation. “I will fight tooth and nail for this district.”

Running in Washington’s 10th district, Doglio, who identifies as bisexual, has the potential to become the state’s first out LGBTQ congressperson.

Related: Georgia Rep. Park Cannon is a queer “activist elected official” getting it done in the South

“It would be awesome,” she said. “I mean, it’s really unfortunate that I would be the first. Here we are in 2020 and there has not been a single other person…The time has come when this should take place. So I am super excited about it. I’m looking forward to being a very strong advocate for the LGBTQ community, as I have been as a state legislator.”

A member of the LGBTQ Caucus, Doglio said she has enjoyed “standing side by side, and encouraging and empowering my LGBTQ brothers and sisters to speak out.”

“It’s really important that people see people in positions of leadership talking about their identity,” she said, “and hopefully that helps people feel comfortable, and know that regardless of how they identify themselves that they, too, can move through this world and have role models, and know that other people are able to succeed.”

Doglio is running for Congress, she said, because she feels the stakes are too high not to.

“I think our very Democracy is under attack,” she said.

She is intent on passing sweeping climate change solutions and she also supports Medicare-For-All. Running in a district that also contains one of the largest military bases in the nation, Joint Base Lewis-McChord, Doglio says she is also committed to fighting for the rights of trans people to serve in the military.

Doglio’s race is a crowded one, with eighteen other candidates competing in the August nonpartisan primary.

“Actually passing landmark legislation through my relationship building and my ability to bring the outside advocacy power into the walls of the policymaking arena is really what makes me stand out,” she said.

She also noted the large number of endorsements she has received, including from Senator Bernie Sanders, and U.S. Representative Pramila Jayapal.

“I have over 135 elected officials because I have worked closely with them,” she said, “Not just as a legislator, but as an advocate for thirty years as well…and I’ve actually delivered and gotten things done, and I’ve passed policies that really make a difference in people’s lives.”

Before serving as a state representative, Doglio was the founding Executive Director of Washington Conservation Voters. She also worked for the National Abortion and Reproductive Rights Action League, Audubon Washington, and has worked at Climate Solutions since 2007.

Doglio is most proud of her prime sponsorship of a bill that set an efficiency standard for existing commercial buildings, which she said is the first of its kind in the nation. She noted though that it wasn’t her only accomplishment in the state legislature.

“There’s a ton more,” she said. “I’ve done things to help people breastfeed in the workplace. I negotiated the strongest bill to reduce toxic chemicals in our environment. I want to go do that at the federal level.”

The first bill she ever introduced, back in 2017, she added, focused on police accountability. “It was very controversial at the time, but I went out and supported my families in my community who deserve accountability when there is excessive use of force.”

Expanding access to housing, she said, is another priority of hers, as it is a really significant issue in her district.

“I’ve worked really hard on a federal housing plan. There’s a lot of work to be done to reform our federal programs to make sure they’re meeting the needs of people who find themselves without a home. I think the federal government has not been an equal partner, that it has really been left to the state and local governments to work on housing issues, and I think the feds really need to step up, and I’m going to play a big role in making sure that happens.”

Above all else, Doglio emphasized, she is prepared to keep fighting.

“I’ve been part of the fabric of this district for the last two decades. I raised my family here…I’d be absolutely honored to represent us in Congress.”