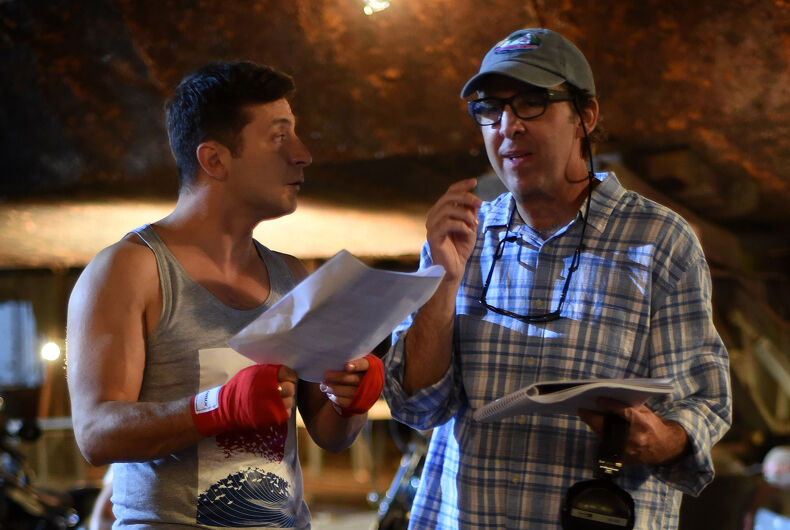 With the release of the 2018 film Me You He She, David Dodson earned the distinction of directing the highest-grossing Ukrainian movie of all time. Joining him on set as his lead actor was a popular comedian who was also eyeing the nation’s presidency. Now three years after making history alongside President Volodymyr Zelenskyy, Dodson, a staunch LGBTQ ally, discussed Ukraine, the United States, and what it was like to work with the heroic icon.

Affectionately referring to Zelenskyy by his nickname, Vova, the hit-making director explained to LGBTQ Nation that the 2018 blockbuster was the third movie he helmed that starred President Zelenskyy, along with having edited almost a dozen Zelenskyy films in total.

Their collaborative relationship has its roots dating back almost 15 years, to a movie filmed on location in New York City. That romantic comedy, Love in the Big City, which was the then-burgeoning auteur’s first Ukrainian production, set in motion Dodson’s personal and professional pathway moving forward.

Reflecting on what it was like to have Zelenskyy ostensibly working under Dodson’s vision while planning to mount a presidential campaign, Dodson delved into the heart of what made their partnership work.

“I don’t think anyone ever understood how Vova manages to do all that he does. Being the star of these movies, he was on set all the time. But he was also the head of his media company, Kvartal 95, which did TV shows, live shows, animation, tours, etc. When he showed up to set he was always completely prepared and 100% focused. I never once felt like he was distracted from the immediate task at hand. If he was acting, he was acting. If he was producing, he was producing.”

Dodson added the key was Zelenskyy’s “laser-like concentration” that managed to make those around him better at the same time.

“Vova was monumentally generous. He treated me like I was an Oscar-winning director. He has the ability to make people feel like they’re capable of greatness, and he trusts you to do it.”

When asked if he was surprised that the Ukrainian President rose to the monumental task of becoming a wartime leader, Dodson made clear he wasn’t, but for reasons not entirely tied to Zelenskyy personally.

The bravery and courage of Ukraine’s citizenry have become a universally accepted truth in the face of the ongoing counting Russian onslaught; less accepted is the narrative of Ukraine as a society that accepts those identifying as queer.

With the movie industry in the US being a bastion of acceptance, Dodson opined on what life is like for the LGBTQ community in Ukraine.

“Homophobia is the default setting in both Russia and Ukraine, so there are not many actors openly out. It’s just not talked about. Even Zelenskyy’s media company, Kvartal 95, and their troupe of sketch comedy actors use a lot of low-brow humor laced with homophobia. This said, Ukraine has been on a steady trajectory of improving attitudes regarding homosexuality.”

According to Dodson, life on the film set in Ukraine is more accepting than general society for those who are LGBTQ and he “never personally encountered or witnessed any bad behavior towards gay cast or crew” while making a movie.

As with many Ukrainian families, on February 24, Dodson and his Ukrainian wife, Natalya, absorbed the devastating news that came with the commencement of Russia’s full-scale war on Ukraine.

“My wife received a one-word text message from her sister in western Ukraine, ‘Bomb.’”

They then lived through an “utter nightmare” as his in-laws and five-year-old niece huddled in a makeshift bomb shelter, waiting out the rocket attacks near their apartment.

“Most people can not comprehend what it feels like to know that your family is being targeted for death,” Dodson said before adding that his father-in-law escaped Irpin just “days before the Russians got there.”

In light of Russia’s current terrorism against Ukraine, Dodson took a moment to point out just how badly Russian–Ukrainian relations have deteriorated in a relatively short time.

“I think it’s essential to understand that, prior to the Revolution of Dignity in 2014, and even to an extent after, Vova was a beloved comedy star in Russian. There was nothing controversial about him.”

In fact, Dodson himself had experienced working with Russians. Love in the Big City was co-produced by a Russian company and directed by Maryus Vaysberg, a Russian national.

While living through the visceral trauma of war, Dodson is also thinking of both the present and future, a future where Ukraine, as expected, has won the war and a present that is seeing tremendous challenges for democracy and civil rights in the United States.

“I’m not discounting generations of grief that will follow this time; it’s heartbreaking in ways I can neither describe nor comprehend, but the Ukrainian people will survive and thrive. This I know. After Ukraine wins, I do see myself working in Ukraine a lot.”

Then in a nod to the turmoil and pain being experienced stateside Dodson added, “However, the U.S. is going through its own existential crisis and I don’t see myself abandoning that struggle either.”

He finished by ruminating on the duality of a life lived across two nations, and on two continents, with both places involved in their own wars.

“It’s a curious thing, to arrive at a moment in your life when your heart is neatly divided in two, with two loves, two passions, each calling, each in desperate need, and always feeling like you’re not doing enough for either.”

David Dodson, Love in the Big City, Me You He She, Ukraine, Volodymyr Zelenskyy, Zelensky movies