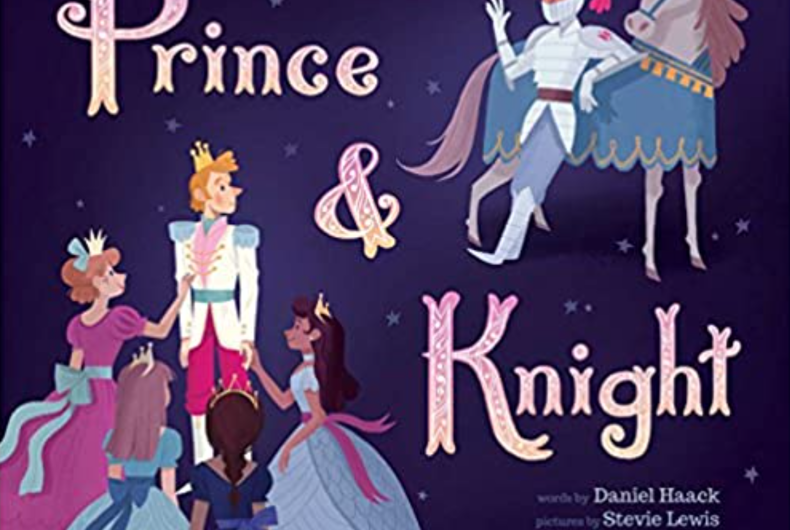 Some parents in Woodbridge, Virginia are angry that a librarian read an age-appropriate children’s book called Prince & Knight to the school earlier this month.

The book by Daniel Haack is about a prince who “prince didn’t quite find what he was looking for” when his parents tried to set him up with some princesses. He and a knight are then forced to battle a dragon and protect their lands, when he discovers that the knight is who he was looking for all along.

Amazon says the book is for preschool through third grade children.

Despite the anodyne story, some parents at Marshall Elementary School are angry that a librarian read the book during morning video announcements to students this past Friday.

“Some romantic issues or sexual issues should be dealt with at home because gay marriage can be a matter of religion,” said Janelle Anderson, as if straight marriages aren’t religious even though they often take place in churches.

“I thought that was a very controversial choice to read at an elementary school level and not give parents the option to opt-out or give parents a warning.”

Anderson was so mad that she posted a video of the librarian reading the book to social media with the caption “Force-feeding gay romance books to kids.”

WUSA9 asked her if she would feel the same way if the librarian read a similar book about a straight couple, and Anderson said, “I don’t really think that romance of any kind belongs in elementary school books. I cringe at the Snow White story.”

That doesn’t exactly square with her use of the word “gay” in her video caption or why she hasn’t said anything about any books read at the school until now.

Former teacher Rebecca Anderson said that she thought it “just makes sense” to read a book with LGBTQ characters during Pride Month.

In a statement, Principal Dr. Kristin Bock said that the school will not tolerate “intimidation of Marshall staff and insinuated threats against them.” She did not say whether anyone has been making threats.

Panicking Democrats are already whispering about dumping Biden in 2024