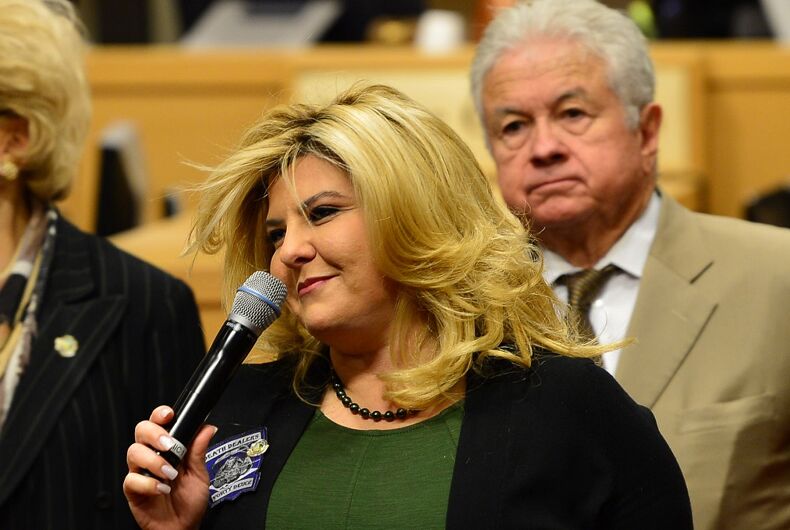 Unlike many of the outspoken crop of deranged conservatives trying to blame the queer community on society’s ills, Michele Fiore is different.

Michele Fiore’s mother is an out lesbian.

Michele Fiore has marched in Pride.

Michele Fiore has engaged at least one transgender woman both publicly and privately to work with her.

No, Michele Fiore doesn’t hate the LGBTQ community, she’s just another power hungry, bigoted, spineless politician willing to do anything to hold onto to a paycheck as she is under FBI investigation and staring at looming irrelevancy.

June 14, 2016. The sweltering summer of six years ago hadn’t yet been written into history as the season which saw Donald J. Trump gain the Republican nomination on his way to gaining the presidency of the United States.

But on that day a headline blared across a Politico profile that invoked his name, along with that of a rising star in the then-nascent reactionary wing of the GOP.

Titled “The Lady is a Trump,” it asked if a certain Nevada politician would follow Trump’s footsteps onto the national stage.

That story’s subject, Michele Fiore, went on to be trounced in her own primary that cycle, losing by double digits to eventual winner Danny Tarkanian on the same day the story ran.

On June 14 of this year, Fiore will be on the ballot again in Nevada, this time with the expectation that she’ll decisively prevail against her competition in the intra party faceoff and head into the general election against Nevada’s incumbent State Treasurer Zach Conine (D).

Winning the nomination for a statewide office would be considered an accomplishment for most politicians, for Fiore however, the prize is yet another example of her penchant of never living up to her own hype or that of her fervent, yet easily duped, supporters.

After her embarrassing failure in 2016, Fiore floated in the political wilderness until sneaking out a victory for Las Vegas City Council in 2017 by 2 points in an off year, non-partisan, battle where turnout was less than 15%.

Once on the Council, the same wretched approach that landed her the Politico write up was on display.

While her actions in the Nevada legislature included conspiring with named domestic terrorist and former Washington state lawmaker Matt Shea and building relationships with indicted insurrectionist Stewart Rhodes and the Bundy clan, once Fiore found her place behind the dais, her behavior became ever more unhinged.

During the peak of the Black Lives Matters protests, Fiore railed against affirmative action by claiming that if “my white ass is more qualified than somebody’s Black ass,” she should get the position. Also during that time period it was reported that she made the statement at a meeting of the Las Vegas City Council that “White Lives Matter” in addition to naming off other races.

This history of agitating racial strife wasn’t new to the Brooklyn-born politician. In 2015 she casually used the term “colored” while referring to a black colleague in the state assembly.

Yet Fiore – who believes cancer is caused by a fungus – vehemently denied that racist intent was behind her statements, which leads to last week’s comments about the transgender community.

In addition to her mom’s sexual orientation, which Fiore has proudly touted over the years, almost a decade ago the then-Assemblywoman voted to overturn Nevada’s ban on marriage equality.

Her first public comments regarding the trans community dates back to the bathroom bill battles of the mid 2010’s.

On a radio show she hosted at the time she had this to say, according to a transcript provided by RalstonReports.com.

“I want to be in the shower with other girls and if you are transgender and you have a penis… I don’t feel like looking at your penis! Nor do I want you looking at my va-jay-jay.”

Fiore then made clear that she didn’t have an issue with the idea of a person transitioning.

“So I don’t care if you have a va-jay-jay, until you a va-jay-jay stay out of my nakedness area!”

In addition to that record, Fiore also had a direct connection to an out and open trans woman.

Chattah, who called for the hanging of Nevada’s current AG, Aaron Ford, a Black male, had engaged me to do political opposition research on her fellow Republicans. I did so, at no cost, compiling reams of sensitive information which I handed off in near real time to the state’s Democrat party, and individual candidates who were in alignment with the values of the United States and not the traitorous Trump administration.

Upon our introduction, Fiore and I entered into the same style of relationship which Chattah and I had, and in addition to dining with her a couple of times, we communicated with regularity for a  few months, as I compiled dossiers on her GOP enemies, again free of charge, and again with the end result of me sharing that data and info with other liberal and progressive groups, media outlets, and centrist Republicans.

We grew close enough that Fiore even suggested I start a Socialist party in Nevada, which I helpfully responded to by pointing out that the Democratic Socialists of America (DSA) already had a strong presence in the state.

Our relationship ended when angered by my intended political aspirations, she attempted to destroy my personal life, and told me my actions were a “big mistake.”

Her record and actions are abhorrent, repugnant, and not befitting a person aspiring to, or deserving, any elected office.

Michele Fiore is an opportunist.

Michele Fiore is not anti-LGBTQ, nope, not at all, she’s just a no good, very bad person. In every way.

Pride In Pictures: A memory not to be forgotten