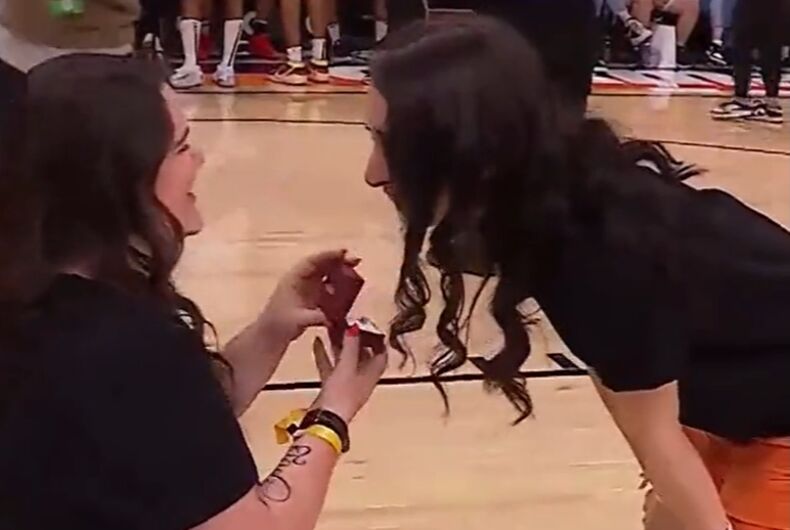 A woman proposed to her girlfriend on the basketball court during a pro-game on Wednesday, surprising fans and warming hearts.

The proposal occurred during a game between the Phoenix Mercury and Seattle Storm, according to Outsports. The two teams are with the Women’s National Basketball Association (WNBA).

Related: Proposals, hugs and mittens: 9 of this year’s most feel good stories will make you smile

The second woman then gets down on one knee and pulls a small ring box out of her pocket as her girlfriend interestedly leans forward. When the kneeling woman pops the question, her girlfriend put her hands on her face, seemingly surprised.

The proposing woman’s free hand then reaches out to touch her partner’s arm in a gesture of concern. Holding each other’s arms, the girlfriend nods yes, the kneeling woman stands, and the two hug, as a photographer in the background snaps their pictures.

The women’s names are not yet publicly known. The Mercury later beat the Storm, 97 to 77.

Outsports recently noted that 20 percent of active WNBA players are out as LGBTQ, making the WNBA quite possibly “the most gay-friendly sports league” in the United States.

The WNBA has recently made headlines due to the arrest of lesbian player Brittney Griner by Russian authorities on drug smuggling charges. On Friday, a Russian court extended Griner’s pre-trial detention for an additional month. She’ll now remain in a Russian jail until June 18. Her case is expected to go to trial.

This Week on LGBTQ Twitter: The gay urge to buy rainbow swag & other queer realities