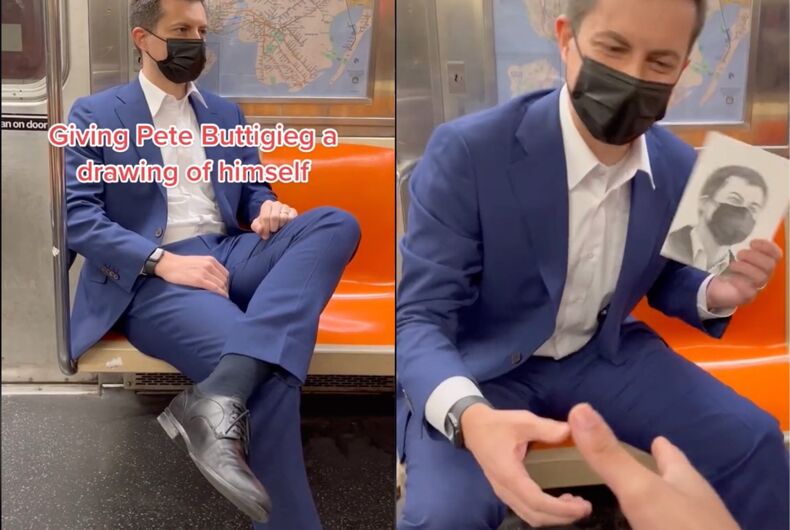 Transportation Secretary Pete Buttigieg ran into a fan on the NYC subwayPhoto: Screenshot

Out Secretary of Transportation Pete Buttigieg was surprised on the New York City subway by a fan with incredible talent.

Little did he know that he was sitting across from Devon Rodriguez, TikTok’s most-followed artist with over 25 million fans.

Rodriquez frequently posts videos of himself drawing unsuspecting straphangers and giving them the sketch while recording their reactions. So when he saw Buttigieg grab a seat across from him, Rodriguez quickly grabbed his sketchpad.

A stunned Buttigieg accepts the drawing as Rodriquez thanks him for “everything you’re doing for the subway.”

The only out presidential candidate to win a state primary election, Buttigieg has become one of the most popular members of President Joe Biden’s administration. He and his husband, Chasten, adopted twins last year and the celebrity couple have become stalwarts in defense of LGBTQ rights and progressive policies.

While some criticized the gesture as creepy or “cringy,” Rodriquez isn’t sorry in the least. As he points out, “cringy” made him famous and the recipients of the sketches love them. Many, like one woman who broke down in tears, tell him that it makes them feel seen and appreciated.

YOU CAN DO WHATEVER YOU WANT IN THIS WORLD‼️

Going to your first drag show? Here’s what you absolutely need to know