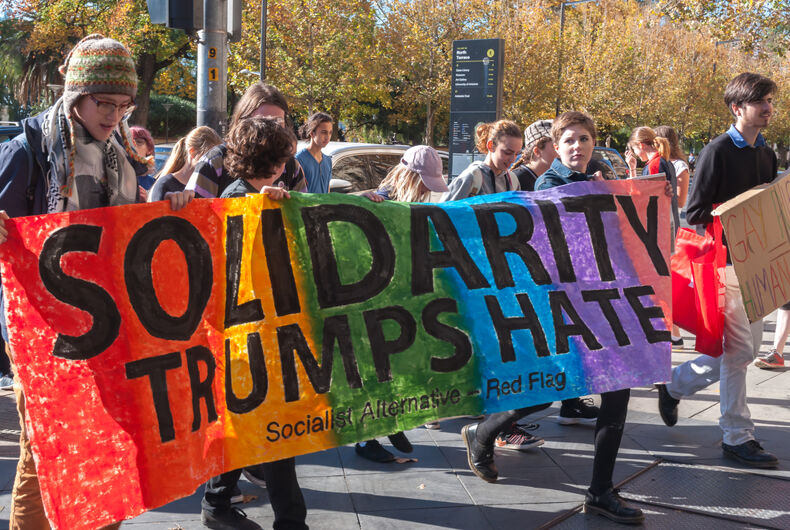 A 2017 protest for marriage equality in AustraliaPhoto: Shutterstock

Two people who were protesting for LGBTQ rights have sued Massachusetts State Police, saying that they were ticketed and ordered to leave as they counter-protested people who claimed that their city was making people gay.

In November 2021, Heidi Olson and Michael Picard were counter-protesting in Swampscott, Massachusetts, against people who were protesting against the city’s Pride flags.

The anti-LGBTQ protestors had signs saying that the town’s government was “trying to make everyone gay” and “make the kids gay.” They were also protesting against President Joe Biden and in support of Donald Trump.

According to the complaint, the anti-LGBTQ protestors got more vocal, with one telling a person carrying rainbow flag: “take down the flag, fa***t!” The same person threatened to pepper-spray a passerby who got mad at her for using slurs. She also allegedly got mad at boys form a nearby school who didn’t want to talk to her and told them they were being turned into “girls, f*gs, gay” by their school.

Olson and Picard were protesting against the anti-LGBTQ protestors and, they said, mostly collecting signatures for LGBTQ rights petitions. They had a sign that said “Let’s Make Everybody Gay.”

Picard said that the slur-shouting protestor threatened to pepper-spray him because he was carrying the gay sign.

According to the suit, Massachusetts State Police Trooper Devon Surian ordered Olson and Picard to stop using the bullhorn, and they say they did.

Surian made Olson and Picard stay until they gave their names and contact information. He accused them of “inciting” behavior; that is, their counterprotest could naturally lead the protestors to riot or commit acts of violence, “presumably referring to the fact that they were engaging in a counter-protest that the demonstrators did not appreciate,” their lawsuit states.

Picard and Olson were also fined $200 each.

The ACLU of Massachusetts, which filed the lawsuit, says that Olson and Picard “did not impede anyone’s passage on the public sidewalks or grass” and that their protest was legal. They were given citations for “disorderly conduct,” which the ACLU argues “violates free speech and is unconstitutionally vague.”

“Our right to protest — and to counter-protest — in public forums is essential, and clearly enshrined in both the U.S. Constitution and Massachusetts Declaration of Rights,” the ACLU of Massachusetts’s Ruth Bourquin said. “The DCR regulations — and [Massachusetts State Police]’s enforcement of them against our clients — are blatantly inconsistent with free speech principles.”