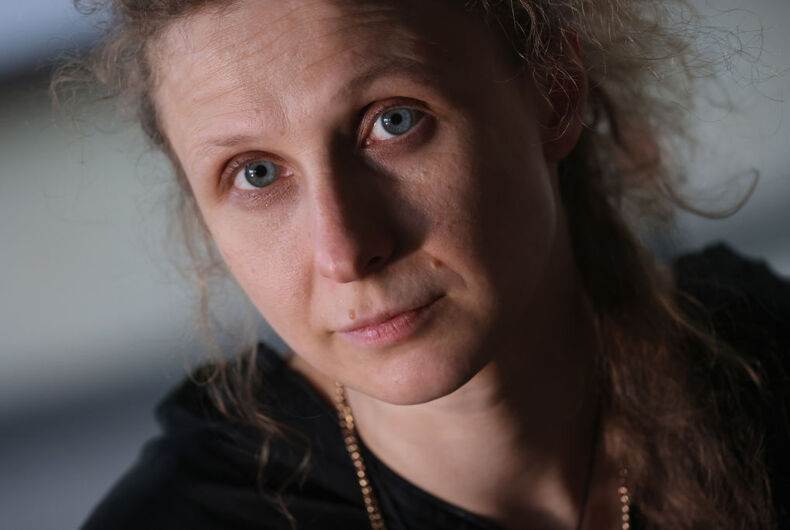 The queer political activist and punk rocker Maria V. Alyokhina executed a daring escape from Russia recently. Alyokhina is a member of Pussy Riot, a protest and performance art group that first made waves in 2012 for staging an anti-Putin protest in a church.

Alyokhina has been fighting for Russia to respect its own constitution for over a decade now and has been imprisoned more than once. Her escape involved slipping into Belarus dressed as a food courier, then making multiple attempts to cross into Lithuania. She was denied exit from Belarus twice before finally succeeding with the help of an unnamed European Union country.

In Lithuania, Alyokhina granted The New York Times an interview in which she described her cinematic escape, saying it read like a “spy novel,” and spoke out against the Russian regime’s invasion of Ukraine.

“I don’t think Russia has a right to exist anymore,” Alyokhina told the newspaper. “Even before, there were questions about how it is united, by what values it is united, and where it is going. But now I don’t think that is a question anymore.”

Alyokhina was joined during her interview by her girlfriend, Lucy Shtein, another Pussy Riot member who recently fled Russia. Most members of the activist collective have had to leave their homeland in the face of deepening political persecution.

While Alyokhina’s escape was certainly harrowing and there were close calls, including a six-hour interrogation by border guards during her first attempt to cross into Lithuania, she credited its success in part to Russia’s internal chaos.

“From here it looks like a big demon, but it is very disorganized if you look from the inside,” Alyokhina told The New York Times. “The right hand doesn’t know what the left hand is doing.”

In the midst of her escape and planning a European tour with the rest of Pussy Riot, Alyokhina expressed a desire to someday return to Russia. It is her home, after all. Unfortunately, she doesn’t know when or how that would be possible, given the political climate within the country and its growing political and social isolation.

As a result of the country’s invasion of Ukraine, not only have activists and independent journalists fled the country, but it has also been on the receiving end of intense international economic sanctions. There is also a growing divide between Russian citizens and other nations’ governments and populations, which Alyokhina pointed out, describing how she was treated better at the border when guards thought she was “European” and not “Russian.”