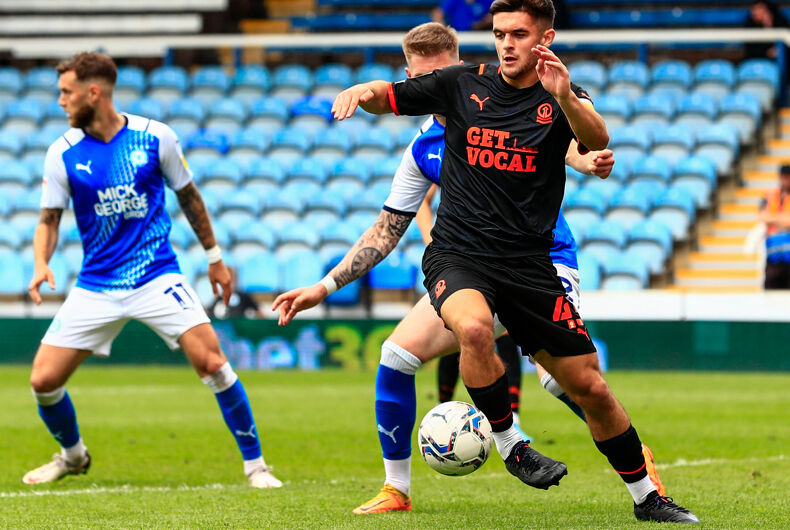 PETERBOROUGH, ENGLAND - MAY 07: Blackpool's Jake Daniels during the Sky Bet Championship match between Peterborough United and Blackpool at London Road Stadium on May 7, 2022 in Peterborough, England. Photo: CameraSport via Getty Images

“I know now is the time. I am ready to be myself, be free and be confident”.

With those words, English soccer celebrated a watershed moment on Monday. At just 17 years old, Blackpool player Jake Daniels became the first professional player in the UK men’s game for more than 30 years to come out publicly as gay while still playing.

Related: This dog is the new face of online homophobia

It was a remarkable, historic and emotional moment, as the teenager – who only turned 17 in January – sat down to speak to television cameras with the maturity of a man twice his age, telling the whole world why he was ready to embrace his true identity.

“Since I’ve come out to my family, my club, and my teammates, that period of overthinking everything – and the stress it created – has gone. It was impacting my mental health. Now I am just confident and happy to be myself finally.”

The significance of this moment for English soccer and LGBTQ supporters cannot be overstated. The last professional male soccer player in the English game to come out as gay during his career was Justin Fashanu in 1990. Tragically, he took his own life in 1998, after enduring years of homophobic abuse.

Other players have since waited until retirement to come out, including the former Ottawa Fury player Thomas Beattie and the former Germany international Thomas Hitzlsperger.

English soccer has wrestled for decades with the taboo of homosexuality. Homophobia is still rife among supporters and, to some extent, in locker rooms. The consensus had been the sport was simply not ready, the atmosphere too toxic and the personal risks not worth taking.

Over the last few years, however, there had been a subtle but noticeable shift in momentum, driven by initiatives such as the Rainbow Laces campaign and Football v Homophobia. English clubs finally began to take seriously their duty to create a supportive and safe environment for LGBTQ+ players and supporters.

Last October, Adelaide United player Josh Cavallo came out with an overwhelmingly positive reaction. He was, at the time, the only top-flight male professional soccer player in the world to do so. On Tuesday, International Day Against Homophobia, Biphobia, Lesbophobia, and Transphobia, Daniels was able to reflect on having joined him.

The soccer world – and the wider public – rallied around him. Boris Johnson, the UK Prime Minister, tweeted: “Thank you for your bravery, Jake. It would have taken huge courage to come out and you will be an inspiration to many both on and off the pitch.”

Premier League clubs Manchester United, Manchester City, and Chelsea all said they were “proud” of Daniels. The Football Association, English soccer’s governing body, hailed the striker as “an inspiration.”

Gary Lineker, the former England striker and one of the most instantly recognizable faces in the global game, said: “I’m sure you’ll receive huge love and support from the football community and many others will follow your path. Good luck to you.”

This truly is a landmark moment – so, what does it mean and where does it leave us?

Lineker, so often the man to encapsulate the United Kingdom’s feelings when it comes to soccer, is surely right. For years the feeling persisted that English soccer needed just one player – one hero – to stand up and say the words “I’m gay.”

On Tuesday, Daniels emerged as that man – or rather, that teen. He has his whole career stretching ahead of him. This pleasant, fresh-faced and charmingly honest teenager went overnight from a little-known championship footballer to one whose name and face are flashing around the world.

One hopes, of course, that his soccer career will go from strength to strength. Not least on the pitch, where his club, Blackpool, sits in the second tier of English soccer. Bigger teams in England and further afield will be taking an interest in his talents. Having made his announcement, he must not be defined by this moment alone.

English soccer must also now protect him. With depressing predictability, having made his announcement Daniels immediately received homophobic abuse on Twitter, leading to swift condemnation from the LGBTQ charity Stonewall.

What a moment this is for the legions of young LGBTQ soccer fans in the UK, Europe, and beyond. How emboldened they must feel – finally, an icon they can rally around, a young man just like them, a man of their own age they can embrace as one of their own.

And where does English soccer go from here? Is Lineker right to say others will follow in Daniels’ footsteps? Let us hope so, both for the future of the sport and for the well-being of those young men who still feel they cannot truly be themselves in the UK’s most popular sport.

Whether he realizes it or not, Daniels is now a figure who transcends sport. The impact of his decision to speak out on Monday will become clear over the next few months and years, particularly if others follow in his footsteps.

There is no doubt the landscape of English soccer felt different on Tuesday. Overnight, Daniels become the LGBTQ trailblazer we all needed. The game has changed. Do not underestimate the power of this moment. The power of one brave 17-year-old.