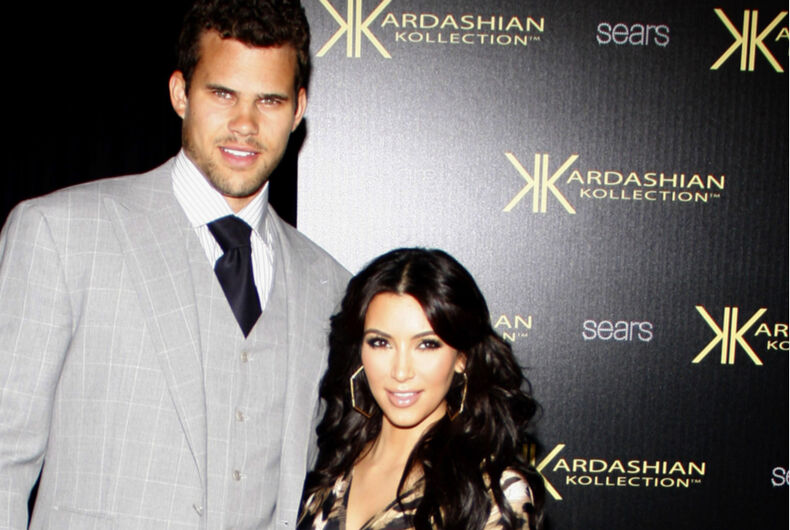 Kim Kardashian and Kris Humphries at the Kardashian Kollection Launch Party held at the Colony in Hollywood, USA on August 17, 2011.Photo: Shutterstock

Former NBA player Kris Humphries is reportedly angry with reality celebrity Kim Kardashian after she called him gay in the most recent episode of her reality show, The Kardashians.

In the show’s most recent episode, Kardashian commented that she “loves a gay wedding,” adding, “I haven’t been to a gay wedding since my second wedding.” Her second wedding was to Humphries in 2011. The two remained married for just 72 days before he filed for an annulment.

An unnamed source described as being close to Humphries said, “He does not understand why Kim continues to think he’s gay. It’s infuriating. Kim needs to move on, just like he has. She really should not drag his name through the mud after all of these years.”

Kardashian and Humphries’ wedding preparations and ceremony were aired as a two-part TV special on E! television. The marriage’s brevity led web commenters to speculate about the couple’s private lives or to wonder if the entire thing had merely been a publicity stunt.

Kardashian spoke about the failed marriage on a May 2017 episode of Watch What Happens Live With Andy Cohen.

She said, “[Before the marriage, I was thinking,] ‘Holy s–t, I’m 30 years old. I better get this together. I better get married.’ I think a lot of girls do go through that, where they freak out thinking they’re getting old and all their friends are having kids. So it was more of that situation. But I knew on the honeymoon it wasn’t going to work out.”

Humphries discussed their marriage in a 2019 interview with The Players Tribune, stating, “I should have known what I was getting into. I was definitely naive about how much my life was going to change. … There’s definitely a lot about that world that is not entirely real. But our actual relationship was 100 percent real. When it was clear that it wasn’t working … What can I say? It sucked.”

The couple finally reached a divorce settlement in June 2013. Kardashian went on to wed rapper Kanye West about 11 months later. She and West had four children together before she divorced him last March.

Humphries, now age 37, has remained unmarried. However, the former NBA player was seen in January 2021 spending time on a Miami beach with a former Playboy model named Neyleen Ashley.

Despite her comment, Kardashian has previously congratulated young musician JoJo Siwa for coming out in 2021.

Humphries played for eight NBA basketball teams from 2004 to 2017, including the Dallas Mavericks, Boston Celtics, Phoenix Suns and Utah Jazz.