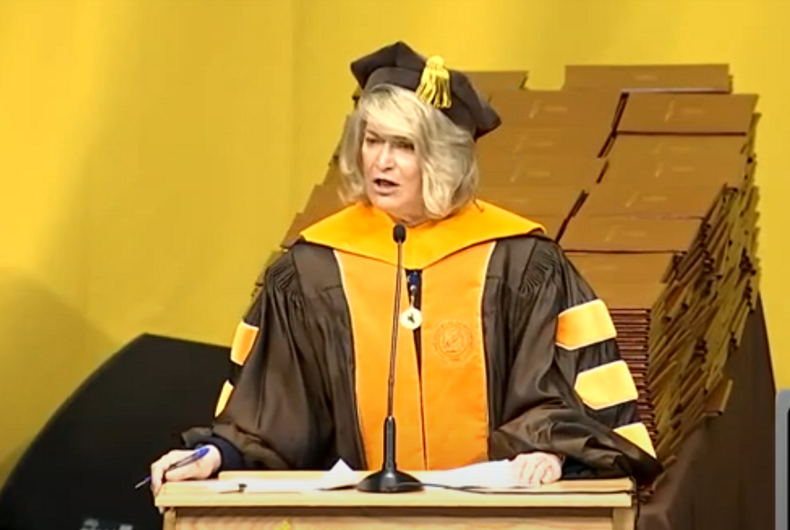 A Republican U.S. senator got booed at a graduation ceremony when she decided to use her speech to attack transgender people.

Commencement is supposed to honor the hard work and achievements of students, and speeches from distinguished people are supposed to impart wisdom to the next generation as they move on to the next phase of their lives.

Related: Homework assignment requires kids to explain how they would de-gay their friends

But Sen. Cynthia Lummis (R-WY) decided it was a chance to rail against transgender people.

“Even fundamental, scientific truths such as the existence of two sexes, male and female, are subject to challenge these days,” Lummis said during her speech at the University of Wyoming during graduation this past Saturday. Students booed and Lummis was clearly rattled by the unexpected reaction she got.

“You know I…. And I challenge those of you-” she said before trying to explain away her previous statement: “I’m not making a comment on the fact that there are people who transition between sexes.” She got more boos.

Those comments came during a section of her speech that was just a list of political grievances, including complaints about COVID-19 pandemic measures and the Department of Homeland Security’s Disinformation Governance Board, which has been the subject of rightwing conspiracy theories.

In a letter to students and parents, the University of Wyoming distanced itself from Lummis’s comments without apologizing for inviting her to speak in the first place.

“One of our speakers made remarks regarding biological sex that many on campus take issue with,” University of Wyoming President Ed Seidel said in a statement. “While we respect the right of all to express their views, from students to elected officials, we unequivocally state that UW is an institution that supports and celebrates its diverse communities that collectively make us the wonderful place that we are.”

Lummis also issued a statement apologizing. While she lied during her speech and said that her comment had nothing to do with transgender people, she was willing to admit in her statement that she was in fact talking about transgender people, but “it was never my intention to make anyone feel un-welcomed or disrespected, and for that I apologize.”

“I share the fundamental belief that women and men are equal, but also acknowledge that there are biological differences and circumstances in which these differences need to be recognized,” the statement said. “I have appreciated hearing from members of the University of Wyoming community on this issue, and I look forward to continuing this dialogue.”