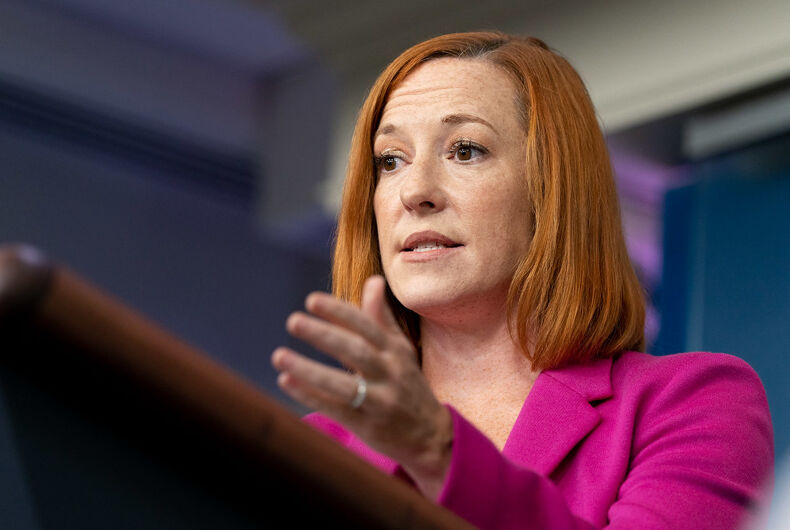 White House Press Secretary Jen Psaki shot down a Fox reporter who brought up the latest rightwing conspiracy: President Joe Biden created an Orwellian “Ministry of Truth” to censor the internet and force people to agree with Democrats.

Fox News’s Peter Doocy brought up the Department of Homeland Security’s (DHS) recently announced Disinformation Governance Board, a subject of much rightwing speculation over this past weekend. Homeland Security Secretary Alejandro Mayorkas has already said that the board will be focused on countering foreign disinformation campaigns, not Republicans.

In an interview on Sunday, Mayorkas said that the board is a “small working group within the Department of Homeland Security” that is developing a set of best practices to address foreign misinformation campaigns and “communicate those best practices to operators.” He cited misinformation from Russia and false information about U.S. immigration that potential migrants are finding online as examples.

But that’s not very scary, so conservatives took it a few steps further. Conservative pundit Candace Owens last week said that it showed that “we are now deep in the throes of a Harry Potter novel,” apparently getting 1984 mixed up with Harry Potter or George Orwell mixed up with J.K. Rowling.

A literal, actual Ministry of Truth.
We are now deep in the throes of a Harry Potter novel. https://t.co/R0egiFmLaX

“Now that the Biden regime has a Ministry of Truth, what’s next?” asked Rep. Marjorie Taylor Greene (R-GA). “Re-education camps?”

Now that the Biden regime has a Ministry of Truth, what’s next?

So it was in that context that Doocy asked Psaki yesterday: “Does the president know that the DHS is putting together this Disinformation Governance Board?”

Psaki first told him that all of this actually started when Donald Trump was in the White House.

“Well, Peter, I think I would note — and I’m not sure if this has been in your reporting yet — but this is a continuation of work that was done under the prior administration — under the Trump administration — to take steps to address disinformation, address the use of disinformation in helping smugglers prompt the movement of more migrants across — to the border,” she said.

She then explained that potential migrants are being lied to online about how the U.S.-Mexico border is “open” and that that misinformation is coming coming from “human smugglers that prey on vulnerable populations attempting to migrate to the United States.”

“So for anyone who’s out there who may be concerned about the increase in migrants to the border: this is the kind of apparatus that’s working to address disinformation and, again, continuing the work of the Department of Homeland Security in 2020, something we’re currently applauding,” she said.

Doocy wasn’t willing to let go of the idea that this was created by Biden in order to shut down conservatives online.

“But just in terms of what the President wants out of this, does he want the people on this board to start censoring information that is not helpful to him?” Doocy asked.

“Well, let me be clear on exactly what this board does or what the work they’re doing does,” Psaki said. “And in their announcement, which is publicly available on the Department of Homeland Security website for anyone to read, it says, quote, ‘The primary mission is to establish best practices to ensure that efforts to understand and respond to disinformation are done in ways that protect privacy, civil rights, and civil liberties, and the right to free speech.’”

Doocy: Does the President know that DHS is putting together this disinformation governance board?
Psaki: This is a continuation of work that was done under the Trump administration to address the use of disinformation helping smugglers prompt the movement of more migrants pic.twitter.com/Vh5c54dMAO