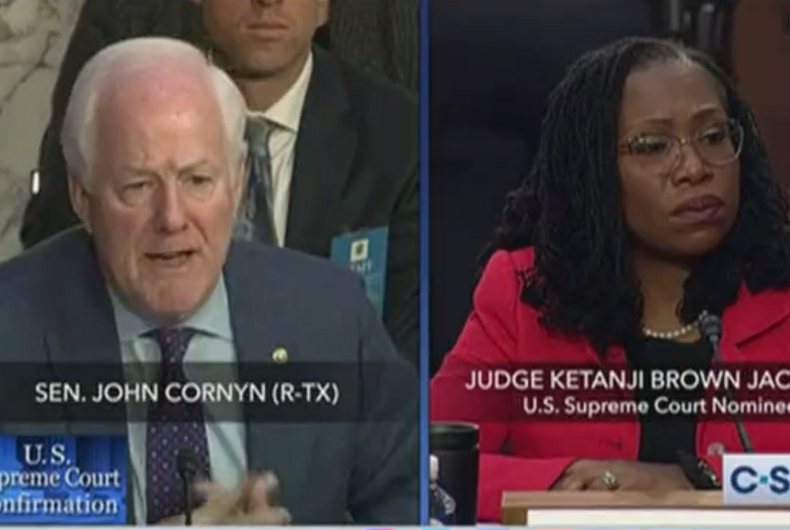 The confirmation hearings for Supreme Court nominee Ketanji Brown Jackson were what passes for performance art among Republicans. There was Sen. Lindsey Graham (R-SC) storming off histrionically, in a ready-made clip for Fox News. There was Sen. Ted Cruz (R-TX) ramping his oiliness up to Mach 10 and embarrassing himself as usual. There was Sen. Marsha Blackburn (R-TN), who is unable to distinguish between the Constitution and the Declaration of Independence.

But as much as the hearings resembled high school theatrics, there were clear signs of serious issues that present a long-term threat to LGBTQ rights. The line of questioning on transgender issues attracted a lot of attention, but just as disturbing were the hints that the Republicans on the committee really want to the court to overturn marriage equality.

Related: The GOP’s line of questioning shows that they want the Court to revisit marriage equality once it overturns Roe v. Wade.

Texas Sen. John Cornyn (R) launched a line of questioning about “unenumerated rights” that the Supreme Court has upheld through its interpretation of the due process clause of the Constitution. Cornyn said that this was “just another form of judicial policymaking” the Court was using “to justify basically any result.”

Cornyn described Obergefell v. Hodges, the ruling that legalized marriage equality as an “edict” that was “a dramatic departure from previous laws.” Cornyn went on a lengthy rant about the evils of Obergefell, which “overrules the decisions made by the people” and which Cornyn compared to the Dred Scott decision upholding slavery.

Cornyn wasn’t the only one to complain about “unenumerated rights” – rights not specifically outlined in the Constitution. Louisiana Sen. John Kennedy (R) said people were asking themselves, “Are justices interpreting the Constitution or are they just deciding a right when they get five votes and it’s just a moral conviction?” (Kennedy has exalted ideas of what most people ask themselves.) Sen. Ben Sasse (R-NB) also pressed Jackson about the Court creating “fundamental new rights.”

Of course, that’s because Cornyn and company are counting on the conservatives on the Court to overturn Roe v. Wade. In doing so, the justices are laying the groundwork to revisit all the other advances that the right-wing hates, starting with marriage equality.

That is not a far-fetched prospect. Justices Thomas and Alito have already made it clear that they think Obergefell was wrongly decided. In his amicus brief to the Court on behalf of the Texas law challenging Roe v. Wade, Jonathan Mitchell makes it clear what the endgame is: striking down not just Obergefell, but Lawrence v. Texas, the decision that found sodomy laws unconstitutional.

While saying the Court should still allow interracial marriages, Mitchell says “the news is not as good for those who hope to preserve the court-invented rights to homosexual behavior and same-sex marriage. These ‘rights’…are judicial concoctions.” Mitchell argues that the Court shouldn’t hesitate to write a decision striking down Roe v. Wade that also leaves the LGBTQ advances “hanging by a thread.”

There’s some comfort in the fact that striking down these rulings would be very unpopular. But the Court doesn’t care about popularity. Nor does it care whether the majority of Americans support marriage equality.

The GOP and the conservative wing of the Court want to impose the views of the minority on the majority, under the guise of protecting the minority’s rights. It doesn’t matter if it violates the rights of another minority–LGBTQ citizens–in the process because it ranks faith as the highest right in society. If that means running roughshod over precedent, or even democracy, that’s a price they are more than willing to pay.